Looking Back On The Coppa

Share All sharing options for: Looking Back On The Coppa 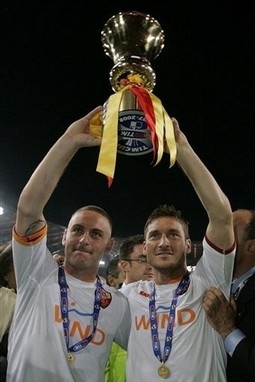 It ended with Inter, but it started elsewhere. A short look back at the ride:

Let's face it, with a mere 45 minutes remaining in the round of 16, Roma was heading towards a near embarrassing early exit. It always seemed like it was "destiny" to wind up here, but it was never that easy. Never that simple. Perhaps they deserve more praise than the hefty amount already being heaped upon the men.

The first game against Torino was utterly dismal. An experimental side at best, the result was surprising, but one which probably stopped short of mind blowing. At the time Antunes, Adrian Pit, Matteo Brighi, Claudio Della Penna and even Cicinho were relative newcomers to the side - some still are. Three have essentially had little impact on the side since that day, even if iTunes has become a intriguing prospect, while Cicinho and Brighi have both carved their own little niche - though neither are irreplaceable. Safe to say it was far from an ideal XI.

And so they went back to Rome needing a very good, if not great, effort to move along. With Real Madrid on the schedule and the scudetto fight in full swing, it wasn't earth shattering. The injuries had been piling up, The Poobah was turning into Bizarro Rafa when it came to rotating players and there was a real belief that Roma could contend in both Europe and in Serie A. Then came this:

In less than a half hour they'd scored four times. They'd reacted and reacted with emphasis. Be honest, with 10 minutes passed in the second leg down 3-1, how many people thought they'd be back at the Olimpico hoisting the trophy five months later? Small group I'm guessing.

Next up was Sampdoria, a team destined for Europe and a formidable opponent over two legs. Just ten minutes in, out goes Philippe Mexes on a red card. For the next fifty minutes they fought, only to go down on a quality shot by Reto Ziegler. Looked inevitable that they'd again head back to Rome with a loss and another uphill battle back at home. Seven minutes later, enter Amantino and Mirko:

Brilliant ball from Amantino and the tie shifted massively in Roma's favor, both on the scoresheet and mentally. As the two quick goals had sucked the life out of Torino, they'd swiftly taken the advantage from Samp just the same. A slim victory at home and it was onto Catania.

The games against the Sicilians were closer to exhibitions than they were cup matches. Catania was still fighting for safety and they were simply outclassed, even if Roma had left there finishing booties at home. Aside from that Totti guy, of course, whose house slippers are gold through and through, nevermind his game boots:

There was no result possible aside from a Roma victory, as dicey as the second leg got at times. We were always heading towards a Roma - Inter final. Always. And to the neutrals, we apologize for this.

There's really little to say, these you just let soak in.

The game was short of fantastic but a hard fought contest, with most of the fighting coming from the bastards in black & blue. I've seen more finesse at monster truck rallies. How in the name of Luís Filipe Madeira Caeiro Figo did they end up with the least number of cards in Serie A this season?

The first half was nearly all Roma, from end to end, with the crew in the middle putting on an absolute clinic. The second half was more or less Inter parking Roma in the back and forcing them to defend as a team, which they did very well. The Fake Pele's shot (somebody should two foot him for accepting that name) was never Doni's fault. Simply a wonder goal. Philou? Absolutely magical. Crippled, broken down, wheelchair bound, I don't care, I don't want to ever see him in another shirt.

All in all, it was a well deserved victory.

As far as meaning goes, it was just another notch on the belt. At this point, beating Inter isn't something special, it's becoming commonplace. For all of Lulu's shenanigans, this is still the third game of four where Roma was clearly the better team; and were all fair, Roma would be 3-1-0 against Inter this season. Consolation prize will have to be a couple trophies at the hands of Inter. Ah well.

What this says for the future is one word: progression. Last year the Coppa Italia victory was a great prize to dampen the effects of a runaway Inter win. This year it is great, but it's a stepping stone as opposed to an ending point, the case with last year's win. The SuperCoppa resides in Rome. The Coppa Italia resides in Rome. The gap in Serie A was closed from 22 to 3. Hell, if the playing field was level, the gap would've been "scudetto".

The fellas celebrated like madmen in Rome on Saturday. I hope to hell they celebrated a true double, because they're the best team in Italy.