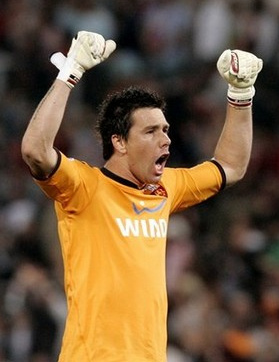 Doni: The man has improved, and I suppose that's all you can really ask for right now. His decision making is still a couple drawers down at time, but those reflexes would give Superman chills. Safe to say there are very few goalkeepers I would rather have at point blank range than Alex. And it's also safe to say I'd rather have a scarecrow at times on setpieces.

Just how it is with Doni: fire and ice.

In fairness, goalkeeper is one of those positions which is destined for more criticism than praise. Mistakes are put under microscope after microscope and great saves are chalked away as "well, that's what good keepers are supposed to do". So maybe I've been a bit hard on him at times, even if he is a lovable little (big) bugger who looks like he'd enjoy a good noogie. Still, some of those decisions...man. The embarrassment of Giovinco's free kick, the positioning against Diamanti's curler, whatever the hell he was attempting against The Poo, etc. Strange, but the spectacular seems to come a lot easier than the basic for Mr. Donieber. Not sure if that's a good thing or not. Well, for our collective health it isn't.

Signed the extension til 2012, which isn't a terrible thing in the end. I'm still so torn on this one. The man has his fantastic days, and he can be one of the best on those occasions, but damn is he frustrating sometimes. Is he a world class keeper? Not yet. Next year will unquestionably be the decider for me. He'll be 29 and, if we see another leap similar to this one, he'll be into that arena - or at least knocking on the door. Considering the true number of great keepers floating around the world (not many, in case you hadn't noticed), he's a good one to have...even if Curci still shoulders the burden of great hope from many.

Tempted to go for the B+, honestly, but he single-handedly won a couple games for the fellas - from the point blank saves against Palermo to closing the door at the Olimpico for the Coppa italia win. In the end, he contributed to many more points than he handed away this year and it's impossible to discount that. Another leap and all will be dandy.

Gianluca Curci: His time spent in the shirt was basically useless, though he didn't really do much either way when called upon. The stint against Napoli, even though they got a boatload of goals, wasn't terrible on a shot-by-shot basis - of course by comparison Iezzo was making him look like Dino Zoff. His save percentage, however, is probably so dreadful I don't want to take the time to look it up. Unfortunately most of them weren't his fault that I recall. It's just quite clear he isn't ready.

Hindsight says he should've been loaned, but if I recall, his girlfriend (now wife who realized she made a terrible decision on the wedding day), was pregnant and due in the middle of August, perhaps the worst time for him to be at another club. I'm fairly sure it was at the very beginning of the season when she had the baby. Football is, at the end of the day, just a job, and as much as we'd love everyone to put it first for our viewing benefit, some things are just more important. Like children, and the perfect grilled cheese sandwich. (Still aspiring, still not there.)

I dunno. I honestly think it was a bit of a lost year from the start. Can we call a mulligan?

Julio Sergio: Thanks for being that guy that everyone genuinely liked, but prayed desperately never had to play.

Carlo Zotti: Speaking of goalkeepers who should've gone out on loan...

Needs/Wants/Desires: Gianluca Curci absolutely has to go out on loan or co-ownership. I think most, if not all, would prefer some type of loan agreement where he absolutely must play a certain number of games or else a couple of real beefy guys from Napoli show up and take care of shit, but chances are it'll be on co-ownership. I don't think anyone sees a way around sending Curci elsewhere for a season or two to get him some experience, and Spalletti has to see the same. It's the only way.

Carlo Zotti probably should go out on loan or something, somewhere; three keepers seems a good enough number in case of emergency, and there's got to be a kid in the Primavera who can look good on the bench in case of absolute emergency. I mean, those Kappa keeper unis, particularly the green one, can make you look good all by their lonesome. Or hey, how's Pietro Pipolo doin' these days?

Likeliest outcome is an experienced goalkeeper with half the reflexes but twice the brain of Doni comes in to back him up. They're usually found floating around easy enough. Hell, Milan has about 19 in-the-package backup keepers ready for self-checkout on their way back from loan. Good, solid backup, that's all we ask.