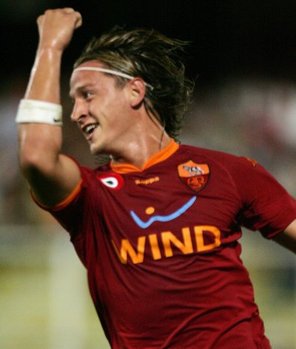 I'm not going to lie, part of this is because I got stuck watching more damn highlight videos, but I figure these deserve their own mini-posts.

Philippe Mexes - Defender of the Year.:

Part of the allure of Philippe is that he has embraced this club and this city so much, he's become one of Rome. Italian, French or Martian, he is as deserving of the title Romanista as much as anyone walking this planet. The guy is simply all Roman, showing it last year by inking a deal fresh into the summer despite being worth twice as much as Mr. What's-His-Nuts thinks he is. So when he puts up stellar performance after stellar performance, it makes it all the more glorious for us as fans.

Unfortunately, I think Juan stole a bit of his thunder this year for a few reasons. One being Juan is the new, shiny toy and he was replacing that other character who used to play here who had a highly publicized transfer saga at some point recently (forget their name...Cristiana?). Another being that he is smooth, whereas Philou is a bit, shall we say, rough around the edges. (On purpose, of course.) But at the end of the day, nearly every week, it was Philou who was being relied on. Providing the big body on set pieces when Roma was in full Oompa Loompa mode, making defenders thinking twice about bringing that shit in his neck of the woods again, forgetting his name is not Philippe Inzaghi and going against the opposition's defensive trap, and finally, just being one of the best defenders on the planet.

It wasn't perfect, there were certainly a few slip ups (namely a few too many cards - though the most glaring undeserving), but all in all, it was just more of the same from Philou. World class play from a world class player. Simple, direct, to the point.

The final game so aptly summed up his time in the shirt: underappreciated technique (that's more than one positively bullshit goal off a corner now, methinks defenses may wanna pay attention to him), bone crunching tackles, warrior mentality and a winning spirit. The best moment for me wasn't that superb goal, either. It was when he went knee-to-knee/thing-to-thigh with an Inter rugby player (thought it was Pele, but if it was pure brutality, we can automatically assume it was Vieira instead) and he motioned for a sub immediately. This after he'd been taking a beating all day. Not only would he have been justified in asking off but any sane person probably should have asked off. Nope. Philou recanted his request and went on to make a couple critical tackles, while taking more of a beating, until the final whistle. A beating which probably cost him a spot on Les Bleus.

That, for me, is the epitome of an athlete. We see it with De Rossi and his never say die spirit. We saw it with Totti recently, when the man couldn't stand and he's still taking shots against Livorno. And we see it with Philou, a true modern day gladiator, and a possible recipient of some personal hardware come award season.

'Tis truly a shame that he missed out on his chance to partake in the summer festivities, but it can only be considered fitting. The man is more Roman than he'll ever be French.

Your 2007-08 Roman Defender of the Year, and you can probably pencil in the next couple as well.