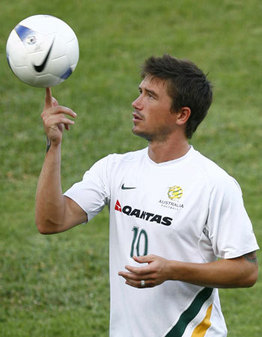 Just wanted to get this out there so I can kinda maybe sorta keep on top of something during the Euros for a change (apologies, but you know).

In case you missed it, there's been a flood of news from Australia saying that Harry Kewell to Roma is imminent, and he'll eschew Valencia for the chance to play in Rome. I can't comment on the validity or legitimacy of rumors emanating from the Australian press, but for some reason I have to believe it's more trustworthy than the Italian variety (then again, so isn't Ms. Cleo).

Socceroos captain Harry Kewell is set to sign for Italian Serie A side AS Roma.

Kewell, in Sydney for Australia's World Cup qualifying match against China on Sunday, is expected to announce the move shortly according to Fairfax newspapers.

Which gets more explanation from this (and another source on the deal):

Nogarotto has developed a close relationship with Spalletti, who warmly received Jets coach Gary van Egmond during a fact-finding mission in April, and who is keen to return the favour by visiting Newcastle next year. Spalletti had scheduled a trip to Newcastle early this month, but Roma's current ownership wrangle forced a postponement. Nogarotto is working on finalising a sister-club arrangement between Roma and the Jets.

So Spal is getting buddy-buddy with everyone in Australia. Fantastic. I love Dunkaroos.

Back to Kewell. First thing's first, he's on a free and will not be commanding anywhere near the salary he was earning at Liverpool. A sum which has taken a good amount of ridicule, but most people are forgetting one important thing: at one point, he was among the best left wingers in the world and nearly every club on the planet wanted him. It wasn't as though he bilked the Reds into paying him that money, he earned it.

Of course, that brings about the great downfall with Kewell: injuries. Harry has suffered a solid number of them over the last few years, and unfortunately, Rafa had made plans to be without him this year and he wasn't used much after returning from his long layoff. But we've seen two players coming off major, and in one case multiple, injuries get through a year in Rome without them in Cicinho and Mauro Esposito. Of course, in Espo's case it's a lot easier not to get injured when you're paying a mortgage on the Olimpico bench - unless we're talking ass splinters. Perhaps Spalletti & Co. feel he can stay healthy enough.

Whatever the case, this is a gamble worth taking. Why? Free. Oh, and on his day, he just happened to be one of the best and most coveted left wingers on the planet. At Leeds this guy was absolutely electrifying and his Liverpool career started off just as well. It's difficult enough finding his ability for sale much less waiting for a suitor to come and sweep him off his feet for free. (Have I mentioned he's on a free?)

At worst, he's a bust and wastes some payroll, taking over as the Australian Samuel Kuffour, just not as lazy and completely fucking useless. At best he recovers his talent and becomes that pacy, brilliant winger with perhaps the best left foot in the game (Roma seems to be steadily acquiring those, eh?) that took the Premiership by storm. Good technique, speed, finishing and a surprising noggin' for a winger.

And of course, then there's his familiarity with John Arne Riise (who I've never liked and am struggling to remove from my shit list - will keep you updated between now and the Supercoppa - but will readily admit is a good addition). In fact, after watching a few Kewell highlight vids, I noticed these two connected for goals on numerous occasions. Maybe Spalletti feels these two can recreate the good days on the left?

But what would be expectations? Mirko Vucinic has made the LW spot his own. Now that leaves a backup. Well, enter Kewell if he is healthy. And if he isn't? Tonetto, Riise, Taddei, Perrotta. They certainly aren't wanting for options over there in this case. One of the added benefits to this Riise acquisition: versatility. The burden placed on Kewell's shoulders would be next to none while simultaneously freeing up money for that vaunted big name striker we've all been hearing so much about.

I wrote something up last summer about the lack of big game experience on this squad, and how the majority of it had come from international play, mostly, duh, with the Azzurri and '06 (and Panucci in his pre-catfight-with-Lippi days). Something which I think wound up in my graveyard of unfinished posts ...but it's the effort that counts, right? Well last summer they brought in Ludovic Giuly, a squad player with European championship pedigree, having played in two finals, taking home the winners medal in one.

Now we have John Arne Riise, champion of Europe and loser of a final. Ditto for Harry Kewell. Am I the only one seeing a pattern here? These are squad players - Riise, and even Kewell I suppose if he joins, may become more - with both ability and experience at the summit of club football, winning and losing. They know what it takes to get it done and what to avoid. For a good, solid team, Roma was missing a lot of know-how. Now they have one champion and potentially another one on the way.

You could do a lot worse than add two squad players - not guys asked to bear the burden of Roma, that's Totti - with this background. Sometimes these role players with winners' medals are what makes the difference in the end. We've seen it before. We'll see it again. We may see it with Roma.

Because I think everyone knows what takes place in Rome this spring. For me, this would be a brilliant zero risk, potentially big reward signing. Bring on Kewell.

(Oh, and how would you like signing Australia's best and most popular player ever to expand the brand?)