Getting Busy With The Hierarchy

Share All sharing options for: Getting Busy With The Hierarchy 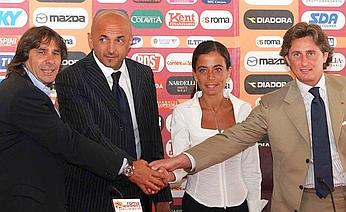 Yeah! So who saw that coming?

Put your hand down, Pinocchio. Yes, co-ownerships were supposed to be resolved, but I certainly did not expect Massimo Cellino to wake up to his morning Folger's and think, "hey, I might just like to get bent over by Roma today". Obviously Espo's greatest performance came during the Genoa home fixture when rumor has it he picked a whole four splinters out of his ass, but he's a guy who knows the system, has a track record of being way better than decent and...they paid 350K. Plus he's a potential buy and move guy. Hell, even a loan move to hope he pulls a Tavano (big fish, small pond) would be fine by me. Because they also sold half of Daniele Magliocchetti (Roman youth product), who played a whole two games for Cagliari this year, for a little over a half mil. So essentially they got Espo, trade bait/decent 3rd winger, plus 150K for a kid who couldn't crack Cagliari's rotation. Sure?

Now, don't be shocked if Mauro is moved. And don't be shocked if he isn't, either. Mauro's not a like for like replacement with Giuly, but he's got some quality and can certainly fill some of his role as a backup. Spal has said he's been the unluckiest person this season because the squad was simply closed (this is me saying bullshit, because if he was really that good the squad's doors can be miraculously blown open by a strong gust of wind, but whatever), so maybe there is something behind this for the 2008-09 Roma squad. Or maybe Spal's just planning on drawing ManYoo once again.

Great start in filling out the squad.Guy's got talent and he deserved more of a look last year, may get it this year. And if he doesn't, Conti will be on the lookout for a new coach by November and Espo will be doing 25 to life.

I'll get to the "big signing" (the poor man's Materazzi-Panucci hybrid) in a second. I just want to know what genius has been watching Brazilian goalkeeping for the last, well....ever, and thought, "One's nice, but how about three?". Sometimes less is more, gentleman. Is Pietro Pipolo ready yet? Because I'm not sure my heart can last the day I see a third Brazilian keeper run out in a Roma kit over the span of a month. Therefore, I'm boycotting friendlies.

In all seriousness, I hear this Artur Moraes cat is a pretty decent and a worthy backup. But I don't get a good feeling when I google image his name and the first two pics that show up are dead bodies. Although sometimes a cadaver would be an improvement over Doni. I'll take it.

On another note, I realize why he was dumped by Siena: not enough characters in his name.

(Still haven't seen a picture, but I get the feeling he looks like Julio Caesar and Mancini had a baby and JC went on regular alcoholic binges during the latter two trimesters. Don't know why.) 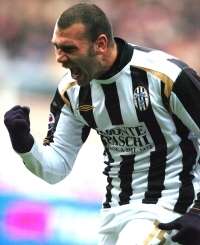 Simone Loria's being billed as a backup CB, which is true, but chances are he's going to be the 4th CB. Grumpy Old Man River has pretty much locked down that 3rd CB spot (if you're starting for the Azzurri, you're at least 3rd for club) and will be the first choice off the pine. However, it gives Spalletti more freedom to use both on the pitch at the same time, because Matteo Ferrari doesn't need a defender to man mark him in front of the Roman goal anymore. (Enjoy him, Viola, Inter, Milan,etc etc etc.) So that's nice. Plus Panucci at RB more often. Lots of options.

Now I'll be 100% honest: I don't pay much attention to AC Siena. Shocked, I know. My Tuscan team of choice is actually Montevarchi Calcio, because I still get nightmares every time I hear Toscana in any language after Spalletti tanked the team back home this season. So I root for a Serie D Tuscan team. I figure if Siena is beating Roma 3-0, they can at least draw with Montevarchi and I'll be all set.

Can't say I know much about Loria's defending, but I can say I doubt Spalletti would've given the go ahead ere he not a solid defender at the very least. (Checking to see if Loria played under TGIP at Udinese.....nope. He's good to go.) What I do know, however, is that he has this penchant for scoring goals, and bullshit ones at that. So he's like a poor man's Matrix-GOMR hybrid with a tinge of Fab Quags. In other words, he's the guy you want leading the back line when you're running a 1-1-9 in FIFA.

I also love the fact that, as he said, this will become living a dream for him. As a Juventus youth product, he's obviously seen the dark side and knows that to truly summit the (untainted) calcio mountain he must go to Rome. Now he's here and he'll fight like mad to prove he belongs. I like it.

Loria is mostly known for that goal a few years back which fills "Bullshit Goal" highlight reels all across the internets. This one...

...but I loved the goal he scored against Palermo this year.

Remember those old Larry Bird - Michael Jordan McDonalds commercials where they took turns attempting to make Fabio Qualgirellas? (These.) That's what's going to happen this season between GOMR and Loria. By about the 17th giornata, Panucci's going to be flicking the ball up to himself for audacious header attempts from about 40 yards out. And when he actually nails one, he's going to run over to Loria and give him the Spalletti/Aquilani/Doni treatment. Is it August yet?

But I really like these moves for depth (the less than elite, won't complain type guys that every team needs in certain areas) at the expense of....

Hey, Why Don't Ya Develop our Youngsters For Us? Peaches. Thanks.

Sending Curci out was both inevitable and a necessary move. Kid needs games and we've talked about that ad nauseam. What the co-ownership aspect does is give Siena a bit more incentive to play the kid than they would if it was a straight loan. They can consider his development a part of their future, whether it be on the pitch or financially, and thus allow the most important thing to Roma, Gilu's growth as a player, to be first on everybody's wish list. It's really a win-win.

As another part of the deal, Ahmed Barusso was sent on loan while his co-ownership was renewed (put on layaway), both moves I also give an enthusiastic thumbs up to. Rimini isn't bending over at this point because one, he's still a talent, and two, they don't have too many talents ripe for the selling like Ahmed. Both teams want him to develop further, but he won't do that at Roma, so it's silly to pay Rimini the money they want if he goes out on loan once again and looks to be a flop. Everybody wins here. So essentially Roma fills out their needed squad depth in return for Siena allowing two prized Roman prospects regular playing time. Sounds like a steal, yeah?

Daniele Galloppa's Roman half being sold was a separate deal, and one which stuffed roughly 1.75m into Roma's pocket. I've got mixed feelings on this one because I, like everyone else, hates to see higher level Roman talent sold, but this also seemed inevitable, much like Curci. Central midfield is far from a need position for Roma and it's highly unlikely it'll be a need position anytime soon, leaving Daniele in no man's land in Rome for now and the future. Daniele had a good year by all accounts, but De Rossi or Aquilani he ain't, and he needs to further develop himself in a consistent setting, which he can do at Siena.

Have no clue about any type of buy back clause, but I'm not sure they need one. In the event that he wants back to Rome and Spalletti & Co. want to mutually rub all up on him, it'll happen. We've seen players force their way to certain destinations before and we'll see it again - particularly those of the hometown variety. We can only hope he continues to develop and someday is worthy of coming back, but today is just not that day. Til then, may birds shit on you often.

Sitting down? Good. Inter doesn't value him nearly where Roma does.

Welcome to Mancinigate. Kill me now. (Hourly updates once this goddamn tournament is over.)

I saw this little news blip flash across my screen and perked up a bit for some unknown reason.

Diogo, who plays for Brazilian team Portuguesa-SP, has already had two offers for him by the Gunners turned down. Portuguesa director Andre Heleno has also confirmed that the Italians bid was turned down, with it also not meeting the clubs valuation of the player, although it is thought it was not by far.

“So far the best offer has been from an Italian side who I cannot name,” Andre Heleno told the press.

“They have bid around £9million, but we want closer to £11million.”

There aren't too many teams looking to spend that kind of cash on a striker in Serie A right now. Juventus? Maybe, but doubtful. Amauri's hair is enough to turn anyone off of Brazilian strikers for the foreseeable future. Milan? Adebayor seems to be more their taste in men. Inter? Well they're always looking for South Americans and strikers, no matter what the squad looks like, so it's possible. Fiorentina? Strongly doubt it. Samp? Napoli? Ditto.

Roma? It's not exactly unfathomable, is it? They've got the cash, they need a striker and they love them some Brazilians. I've heard much worse theories in my day, like global warming and that the earth revolves around the sun (bollocks - the sun revolves around the Premiership).

* - I used one source before reading another because I'm freakin' exhausted. The Siena deal may have included up to a million more for Loria & Artur, but it's really a good deal any way you look at it for what it is. That is all.

Think there's more, but that's it for now. The news tomorrow will be about the return of Lippi and I need my beauty sleep if I'm to look my best while streaming the press conference from a website like 2 hours after it happens. Bless the net.