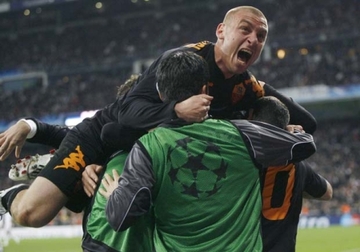 It was a bitter sweet year on the Roman front. While one Roman legend struggled with injures, ultimately seeing an early cessation to his campaign, we got a glimpse of the future - a future which has now become the present.

Since the day of his birth, Daniele De Rossi has bled yellow along with red. The son of a former player, now youth system coach, there has been absolutely no question as to the eventual heir of Totti, with leadership on and off the pitch and now, as one of the best players gracing the planet. There are so many players and people across all walks of life who get by on work, dedication and sheer passion. The number of people who are blessed with otherworldy talent is slim. The person who combines both of these qualities is a true gift by birth. In Daniele, we have that.

From very good player he's transformed to great. There is little question he'll walk out of the Oscar del Calcio awards with the title as Serie A's best midfielder, and he certainly deserves consideration as both the best Italian and overall best player. His defensive cover is inexhaustible, and I don't think it's any great exaggerration to say he's the best defender in Rome. Hell, he might be the best defender in Serie A. His timing, instincts and reactions are impeccable. His ability to read the game while sitting deep allows this club so many liberties others aren't afforded.

Of course, that's only half the story. At his disposal is a golden right foot which can lace perfect balls onto the tip of a needle. There has been so much comparison with Gattuso in terms of his drive, defending and passion, taking it a step further due to Daniele's superior technical qualities (nickname of the year, Gattuso in Armani), but I still think the most apt comparison is of Pirlo and Gattuso all rolled into one. When David Pizarro isn't on the field, Daniele can and often does operate as a playmaker, though he's certainly far from prototypical. A playmaker with similar qualities often is babysat by a hard-nosed, hard-charging defensive mid to make up for defensive inefficiencies. Daniele is both. What an absolute luxury for a coach to have.

There were so many critical tackles, beautiful passes and passionate charges this season that they all seem to blur together. My favorite was Milan at home, perhaps because it was my favorite game of the season, but those are just details. I went back to see what I'd written in the post game review, and found this little overzealous nugget:

Immense. Simply immense. Gattuso dressed in Armani laced out with diamonds and jewels. A 24 year old legend of indescribable qualities; and when he is done, without a doubt in my mind, the best Italian of his generation. I think they should hand out diapers when he plays - he’s just that good. No number can quantify Daniele De Rossi right now.

For how many games this year could we have plugged that into the review? Start talking double digits. His consistency, no doubt driven by his will, was something to behold, and it's possible no one had fewer poor games in calcio this year. (And by "poor" I mean "above average".)

Every single Roma fan dreads the day Francesco walks away, no question; but the future of Roma is in great hands. There's hardly a higher compliment than that. Best midfielder, best player, best everyman for Roma this year. Without a doubt, he's already ascended to legendary status. Make sure you sit up and pay attention for the next decade, it's going to beautiful.