Mercato: Who Needs A Striker? (Roma, That's Who)

Share All sharing options for: Mercato: Who Needs A Striker? (Roma, That's Who) 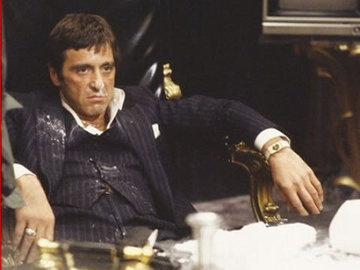 Seems as though the three names being floated around the most these days are Adrian Mutu, Julio Baptista and Klaas Jan Huntelaar. Two of those would be fine, the third would probably force me into a recreation of William Foster. Love the summer mercato.

I'm not sure there's a player in Serie A I dislike more than Adrian Mutu. He's dirty, he's whiny, and he's arrogant with every reason to be excessively humble. His Roman encounters sum it up quite nicely: two elbows in one game. First the elbow to Vucinic that wasn't caught followed by the bow to the head of Cicinho, earning him him a yellow. Then his declaration that he's better in the final 20 yards than Francesco Totti...like 3 months after Jesus won the European Golden Boot. What is you stoopid, Adrian? (To be interpreted in a male Rosie Perez tone.) Come on. There's arrogance and then there's flat out idiocy; this falls into the category of the latter.

Another joyous Mutu escapade was his little rendezvous with Pablo Escobar's pixie dust a few years back in London. Not so much the actual cocaine deal but the adult film star who broke a story on his little cocaine/sexy time habits. (Here's a pic - it's safe for work, but I can't confirm whether or not your lunch is safe....plus she's got a massive gap between her teeth not seen in the picture. Woof.) Listen, nobody is perfect. Marco Borriello is the poster boy for stupid decision making over the last two years, but can you really blame him? (1:35 here) In the case of Mutu....how much cocaine must one huff to not see that heffer coming at you? Gawd. That's in the all time pantheon of bad decisions - along with Dude, Where's My Car?, Crystal Pepsi and Zach Braff's parents not using protection (it's summer, aka the season to bash Zach Braff).

And where is Adrian right now? Miami. HELLOOOOO. That's like taking Jacko to a Chuck E. Cheese with a liquor license. Red flags and sirens everywhere.

However, there is not a player on the planet better suited to playing for Roma. No, that is not exaggeration for effect (moi? nevah) or anything of the sort. It's simply the truth. He is absolutely perfect and starting XI ready the first day he shows up at Trigoria with a bit of fun dip dripping out of his nasal cavity. And that is why he is far and away the first hope of the transfer campaign for The Grand Imperial Poobah. A dick, yes, but a tried and tested Serie A star who would take this team from very good to European contender with the snap of a finger. More than Huntelaar, more than Gomez and more than Julio Baptista.

I've had a sneaking suspicion for much of the year Mutu would leave this summer. Fiorentina is a very good up and coming team, but he's hitting the age where it's time for two things: that final boffo paycheck and to actually win something. The "titles" with Juventus were whisked away and Chelsea won its first title the year he was banned seven months for his yayscapade. At this point his legacy reads: Cocaine scandal and finally helping la viola reach the Champions League. Not exactly what a player of his capabilities wants to look back on in his old age. And though Fiorentina is rising, they're still a good bit away from any consideration for serious hardware. Not saying it's a foregone conclusion, but now's the time if he's going anywhere - both for Fiorentina and himself.

To date, Roma is the only team linked with Mutu, which is mildly surprising. With the recent decision by a court that he owes the financially struggling Chelsea €12m (subject to appeal after appeal after appeal), one would at least think the guy is open to ideas and/or wheelbarrows full of cash. Plus Fiorentina is only offering €2m per year, which won't get it done. Roma, on the other hand, is offering either €2.5m plus substantial bonuses or an above the cap 3m plus.

As for the transfer fee, it's reported Fiorentina would appreciate a sum of €25m while Roma would rather hover around €20m. In these instances, €5m isn't as big a gap as it would seem. Certainly an easier deal to complete than, say, €13m v €8m. Both valuations say the same thing: he's damn good and he'll cost a ton. And if Spal wants him as badly as I suspect he does, it'll be worth the entire transfer budget to net Adrian.

Now the big question....does it get done? The best guess for any type of deal like this is typically no, but I've long thought this is a possibility, even with the Purple People Eaters nabbing that 4th CL spot. One of their suits said they were confident they would be able to retain his services, but that's a far cry from being definitive. The tabloids say some indication should be given before the end of the week, until then we wait.

Personally, this is a win-win. If Mutu winds up in Rome I'll be forced into counseling, but will eventually be able to, with the support of my friends and family, deal with his on the pitch contributions. If not....I can go back to surreptitiously hating Mr. Moo Moo. I don't want him tainting the giallorosso, but it's impossible not to recognize he is probably the biggest difference maker available. And now I need a drink.

So from what I understand....

• He can be had on loan or for the not so exorbitant sum of 12m
• He'd relish playing in Rome, even if he believes he'll still be in Spain.
• Wages aren't an issue.

Uh, do they need me to fly to Madrid and pack his bags for him? I've been iffy on Julio before, but he was pretty impressive for much of the year and he brings that finishing school degree to the treq position now that Simone's dropped out. Brings a bit more of a physical presence to the side, which seems to be a bit of a theme after the year of the Oompa Loompa Brigade, and he can defend as well. Officially sold.

This is a softball lob, even if he's brought on loan with an option to buy. (Or can we just ship them Mancini? Come on, I'd throw a party for that 12m swap.) Plus he could potentially, if on loan or paired with the right second purchase, be in addition to another premier striker. What's not to like about these options?

Much like Cicinho last year, this one seems almost inevitable if Real Madrid decides to sell. A high quality player for a very fair valuation? What's not to like? And I'm sure The Recruiter, Julio Sergio, already has a tricked out pad ready for him in Rome.

* - Speaking of Mancini...I'm trying to avoid sending myself into deep disorientation as was the case with Chivugate, so keeping away from too many details, but I would've been perfectly content had he invoked Article 17 after his duck of a season. Anything into double digits is cupcakes and butterflies.

Not much has changed. Still wicked expensive for a guy who has done fuck all outside of the defensively deficient Eredivisie. I like him, particularly on a team like Roma where he'll receive supreme service, but 25m is a ton of cash for a team without a Roman Abramovich type sugardaddy. The smart money says Mario Gomez is both the better (younger, more accomplished despite the recent tournament of turd) and cheaper option should Roma fail in its bid for that Romanian scoombaag. But that doesn't mean you can't enjoy a YouTuber.

(Kind of hoping for this one simply because the phrase "Klaas is class" would never ever get old.)