Share All sharing options for: Project Mutu & Plan B #137 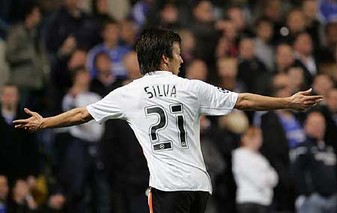 I lied. My actual vacation was anything but, as I disembarked to Rome so that Rosella and I could come to an accord on a laundry list of issues, some of which pertained to the current mercato. I'll catch you guys up to speed quickly on the important stuff and then we can be on again with the regular bizness.

i. I gave my thumbs up on Mutu for Francesco and only for Francesco. Coincidentally just days before the "official" bid was lodged. Read into that however you'd like.
ii. She wanted to know, in the event that Project Mutu fails, how much they should offer for Florent Malouda. I said bird flu and nothing more.
iii. Spalletti didn't actually want Riise. Rosella saw him shirtless on television once and said "no, we can't have that". John's now here as her special tanning project.
iii. She actually does use Crisco to tan. No surprise there.
iv. Rosella asked to have my babies, but discussions broke down when it came to figuring out co-ownership. Again, no surprise.

I'm not sure there's anything to say other than that official denial from the Fiorentina looked an awful lot like Lesson 1 out of the Transfer Fee Negotiating Handbook.

* - Think they could've picked a better picture for the front page of their website if it was going to be that big a deal? One where he grabs his shirt in a blind fury of passion? Or maybe an overzealous celebratory smooching with Pantaleo Corvino? That one says something more like "Ahhhhhh, yup, just soiled myself."

The first offer was in the €19m ballpark, and the next one, if you believe the tabloids, will be roughly 5m more (€24m for those not mathematically gifted). I don't know about you but it's always seemed to me that Rosella starts by increasing offers in increments of Junior Mints, not €5m lump sums. If true, that's some serious hardball, and it says a lot about Spal's feeling on the Mutu addition. Basically, he's the missing piece as long as you discount everything but his skills and that he irritates the shit out of everyone in calcio. The classic love him on your team, hate him if not player.

For those bemoaning the downfalls of the Sensi's parent company, one must only look at Valencia to see the sun peek through those clouds. Not only is the club in a dire financial situation, but for all the money they spent, they still bit the pillow hard last year, amidst incessant drama with short timer Ronny Koeman, and only just staved off relegation. Now that quite plainly sucks.

What this means is they've got to hold a Spanish footballer bake sale at some point between now and the end of the mercato and one of two may reportedly need to go: David Villa or David Silva. The former because he has a positively ricockulous pricetag and may want to try shores abroad anyway; the latter because he'll still command a hefty fee and Valencia has like 27 world class wingers on its roster. So enter one relatively strapped club to help out another. People helping people. Butterflies and cupcakes and all that jazz.

il Romanista, whose transfer reports are about as good and truthful as it gets in the boot, is reporting that Roma is looking at Silva, the slightly cheaper and younger of the two, but still with absolutely epic talent. Party time.

If Totti was 29 and the Champions League final in Minsk or something, I don't doubt Silva would be above Mutu on the wish list. As good as Mutu is, Silva isn't that far away with the potential to be better and without a blackbook that could lead to a victory in the war on drugs across Europe. So skilled on the dribble, with vision and pace on both the right and left, but not yet with the finishing abilities of Mutu (though highly disputed by Chelsea fans). All of which has Rosella reportedly ready to offer €18m for his services, with Valencia reportedly asking for €22m, one million for each of his years. And were I the boss of it all, I'd start in at €22,000,001 yesterday. Of course, this would mean fending off both Liverpool and Barcelona. Not an easy task.

However, as wonderful as DS is, Mutu gives Roma the best chance at this year's final, and the best chance at teaming with a Totti at the top of his game to form a duo of wrecking balls in calcio today, not two years from now. And as we all know...it's all about Totti. Fair enough.

If Project Mutu fails, Silva would be anything but a consolation prize. In fact, I can't quite think of anyone linked in the last year who could possibly match his contributions in three years time. One can only hope.

That goal against Chelski in case you missed it in the first two YouTubers:

I) I saw that Lulu Gulu went to PSG to join the rest of the sunset wagon last week. Fine and dandy, not an integral member of the squad and it may finally give Mauro Esposito his chance to reclaim some glory. My only issue was that he said he never "fit in" at Roma. Seems to me the only place he could fit in is at Roma. Name another club that has a separate ride for guys who can't get on the regular ride at the amusement park. He'll regret it when he's in the shower, turns around and Claude Makelele's cracked beer can is staring him straight in the face. It's the peripherals, Ludovic.

II) I'm convinced the Malouda rumors are simply due to Philippe's need for another French playtime buddy who is already in or willing to enter Raymond Domenech's doghouse. Robert Pires, anyone?

III) Matteo Brighi has renewed until 2012. Sweet. Have a feeling he's going to be a bit of a surprise this year.

IV) Alessio Cerci & his curls may be going on loan to Atalanta, which sounds just about the perfect place for him to get some considerable playing time for a halfway decent club.

V) If you haven't heard, DDDDDDDDR obtained a slight knock on his right ankle this morning.

VI) Came upon the intro to Totti's 200 goal celebration and I formed to two conclusions:

I. God I can't wait until September.
II. Francesco needs to be put out to stud when he retires. I can live with a 2035 Roma edition featuring one fantastista after another, winning games 27-23. Now if only we could find a long line of women willing to rear his children....