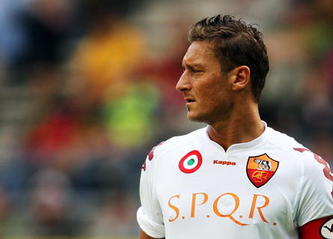 I don't do double takes. In fact, I can count on one hand the number I've done in my life. Well today I did about seven: Totti's in the list for tomorrow. Today was his return to the field and he didn't finish out the day, so this is fairly surprising to say the least. Actually, kinda shocking. I can't see why/how he'd play, and I can't quite see why he'd travel to Romania if he's not going to play. What I do know is if he steps on the pitch tomorrow every Romanista across the globe will be a turbulent mix of exuberant joy and paralyzing fear.

Aside from that bombshell, it's the first friendly of the season. Not much more to discuss because, as we saw last season, they don't mean jack.

The rest of the callups:

Italicized names are those who are playing for a deal elsewhere.

No DDR, who was pool training today.

Tomorrow at 1930 CET, and there is at least one streaming option which should be available.

And so the 2008-09 Serie A schedule has been released today, with an enormous improvement on last year's run of calcio hell. In fact, I'm not sure it could get much better. It's spread out fairly evenly - though weeks 8-10 won't be easy by any stretch - and the first game of the season is a derby matchup against Napoli at home, so the boys will have to show up from day one. Pretty much ideal.

Of course, the good news is subject to change upon the announcement of the Champions League fixtures.

I) Philippe Mexes and his family were carjacked in Rome last night, and the two thugs made off with his Merc, but worst of all, his daughter Eva was still in the back seat, sleeping. After realizing it they abandoned the car with Eva still in the back seat, but I can't imagine how terrifying the time between the car going missing and when the police tracked down the car were for Philou and his wife. Miserable.

This is what happens when Laziali attempt to upgrade from their tractors.

III) Unless this is some type of strange ploy by TGIP, you can forget about Julio Baptista in Rome next season:

“I haven’t even spoken about Julio Baptista. He is a good player but we are fine in midfield."

So it appears Spal doesn't value him as a striker much. But now, with Project Mutu on hold (talk to me when he signs his extension), you can kick back up those Huntelaar rumors. And if you aren't a patient person - which is truly the antithesis of "Roma fan" - go put your head in a hole for the next month:

“Huntelaar is a very good player but we will have to see and there will be no panic buys.”

For those of you who don't speak Giallorosso, "no panic buys" translates directly to "August 31st-ish".

Which is fine, as long as it's the right buy.