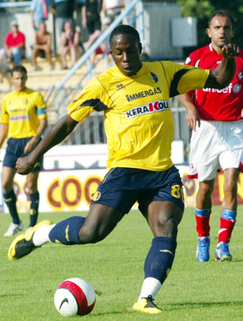 Prudence is a nice and wonderful virtue, one which typically promotes long-term success, but it's also boring as all hell. While the hierarchy and technical staff is furiously assessing certain targets for quality, value and feasibility, the daily news blotter has become a standardized quote from agents with a simple change of name and club.

"My client, [Insert target which is potentially media bullshit here], would be very open to a move to the Giallorossi. It is a great squad with a great tactician and [Insert client's name here] would cut off 1.5 testicles to play with Totti. However, there hasn't been any contact between [Insert said player's club] and Roma. Our lines are open and we await their call, but until then my client is a [Insert club name here] player and he is happy to remain. Also, Rosella is sexy."

The rundown of names you can insert from the last two days:

Djibs Cisse - Marseille
David Silva - Valencia (His agent is practically begging teams to make a bid.)
Nene - Monaco......Do you think maybe they could just sign the NBA player Nene? He's Brazilian and athletic (meaning he's gotta be good at football), 6'10 or so (meaning he'd win every aerial battle imaginable), and he's had a bunch of catastrophic injuries plus a tumor (meaning he's right up Rosella's alley). Actually, I wonder if he's the Nene she's looking at.

And would you look at that, you just saved like 30 mins of internet surfing. Now go plant a tree or something.

* - Florent Malouda's agent also said something, but I'm pretending it's not there and hoping it'll just go away by itself. Kind of like HIV.

With this search for a true striker to backup Totti when he gets back and mold himself into a world class performer, we forgot one thing: there's one in house. Yeah, he's very young and inexperienced, but he's also supposed to be one of football's next great strikers, and players with his freakish athletic skills are often ready sooner rather than later. And that very well may be the case, because The Poobah nixed Stefano's loan deal to Bologna and he's back at Trigoria with the boys for at least the next two weeks. So something of a two week trial for Stefano it seems after his development at Modena and this summer with the U-19 squad.

It's tough to make a call either way on this one, because logic dictates 99% of 18/19 year old children should be sent out on loan duty to carry the bags and bring the orange slices. The problem is Stefano may very well be in that 1%. Physically he is a big hairy chested man of a man's man - anything but a teenager - and he's got plenty of skill and technique which will see him a mainstay in the Roma lineup for years and years. Yeah, he's clearly ready for Serie A, but is he ready for title chases? That's the question which, according to Stefano's agent, Luciano will answer in two weeks.

Actually, this is anything but "yawn". If Spalletti deems the manchild is ready, the future may be now. Pretty damn exciting.

And guess what? He's Brazilian! They've had this kid, Gomes Ribeiro Felipe, formerly of the Fiorentina primavera, in on trial and he was impressive enough that they handed him a contract. And that's all I've got.

Chances are if Fiorentina didn't want him, he's here in the hope that he miraculously turns into something over the next 3 years or so. Something sellable, probably.

I) Coppa draw was today, and it looks like Roma will either get Bologna or Bari. Two opponents it should crush liked any random fragile object of your choice said in an overly dramatic Russian accent.

And since they're on the same side of the draw, the neutral fans of calcio will be spared another Roma-Inter final. Me? A bit saddened. Playing Inter in trophy games is fun these days.

II) Let's just get this out of the way right now: King Alberto is goin' absolutely nowhere. Everybody knows Rosella & Co. can't multitask, and the mercato is the topic du jour. November-ish we'll see something. (And November-ish extends from October to May of next year...roughly.)

III) Was going to write something about yet another Roman reject possibly going to Inter, this time in the form of Matteo Ferrari (and they'll sign Keivan Zarineh in about 3 years, mark my words), but I've decided against it because he's dead to me. Been that way since his clinical finishing at the Sant'Elia. Bastard.

’We haven’t received an offer from AS Roma, these kind of rumours are made up by the press.’

TGIP had better have a Pizarro-esque mancrush on Afellay if they're going to extradite him from Eindhoven. Common sense says these rumors will dwindle over the next week unless the press needs more filler.