Stuffs as The Jesus Returns

Share All sharing options for: Stuffs as The Jesus Returns 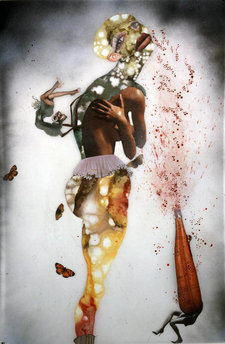 That's some artist named Wangechi Mutu whose work keeps showing up with googles of "Mutu". The only way to possibly describe her style is "anime meets med school meets I just lost my lunch". So yeah, enjoy that.

Still nothing definitive. But neither are the sound bytes, which I find definitively undefinitive...if that makes sense. We can make a parallel between two players: Alberto Aquilani and Moo Moo. Blasphemous, I know, but hear me out. We can easily say Mutu is more important to the current Viola team than Alberto is to the current Roma team, even though Alberto is more important to the future of Roma than Mutu is to the future of la viola for a host of reasons. Now we both know neither team wants to sell, despite the obvious interest from Roma for Adrian and Juve's lust for all things Aquilani. When anyone affiliated with Roma is asked about the situation with King Alberto, they throw the gavel down with a definitive "no, never". However, whenever the Mutu situation is brought up, it's often a "we hope" or "we think" from the purple people eaters. Moo Moo's scuumbaag of an agent, Luciano Moggi's spawn Alessandro, has said he'll definitely remain, but when can you ever trust an agent, much less one named Moggi? Exactly. Fact is, Mutu has the greatest say here and he hasn't said anything as of yet.

So what does that mean? Nothing, but it does seem to leave a bit of wiggle room for those who like to overanalyze these sort of things. Namely myself.

Is this rumor even worth discussing? Spartak wants an assload more money than he's worth and Russian clubs aren't financially strapped. Not to mention he's simply riding the coattails of a solid continental tournament after criticism regarding his weight.

HUGE money (15m+?) for an unproven import? Not for Roma's taste. Totti's status, as optimistic as everyone may be, including the deity himself, is still a question going in to the start of the 38 week campaign. A campaign that can't afford "eh, we'll just hope he first month goes well" with a top buy who has never played Western European football. Part of what makes Mr. Moo Moo so alluring is his tried and tested Serie A resume. Ready from Day 1. Roman is, as lovely as his name may be, far from that.

Maybe, just maybe, if Pavlyuchenko were the "second buy" we could keep an eye on this, but not now, not at his price. Like Dmitri Sychev awhile back, file this one under "we hardly knew ye".

But I can't leave him without putting forth this youtube, from a dedicated fan. A dedicated fan with "restraining order" written all over him/her/it.

And now you can start printing Pavlyuchenko Kappa kits. 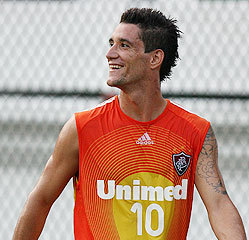 Thiago. One of them, at least.

Thiago Neves reminds me of a boy band star who ignited his career on the Disney Channel while the rest of the world sits at home thinking "Nice try, dude's at least 37". I can't properly explain it, perhaps it's because he looks like a hardened thug from a mob movie, but when I see "23" on his wiki page, I'm thinking "bullshit". Some features appear to indicate his supposed age, but I can't put it all together. So for these purposes we'll assume he's 23...ish. At least until his real passport emerges from the Brazilian jungles.

The number of attacking phenoms currently slicing defenses and adding millions to their transfer fees in cone drills is hovering somewhere around ∞, give or take. In fact, if you're to take one, the bowels of the jungles will magically burp up another 14 year old phenom ready for Arsene Wenger and Pantaleo Corvino to slapfight over - obviously given the size differential Arsene is at a clear disadvantage, so rules require Pantaleo a handicap of one hand enveloping a ham sandwich he must devour. Perhaps a take-your-number deli ticket system would work in Brazil? "#23? Yeah, here's your quarter pound of Kerlon....#37? You get Alex Teixeira." Something like that.

Anywho, this Thiago Neves appears to be good and a bit more ripe than the typical acne riddled, soprano singin' sixteen year olds being scouted down in Brazil. As many eye rolls are given to highlight reels on the continent, feel free to multiply that three fold for those in South America. Not to diss the state of the game down there, but there's a reason the top talent goes transatlantic sooner, rather than later. Plus, great defense isn't exactly a staple of domestic football in Brazil - and that's being Sunday school teacher kind.

But Arsenal wants him. And so didn't Milan. And Manchester United. And usually, that's enough. Here? Absolutely. Three great scouting systems with sizable transfer kittens at their disposal.

In all honesty, having watched just video, he looks like plan B to Mutu's plan A. A creative midfielder with vision and passing who can finish all across the trequartista line. It's impossible to say they're similar players with similar tendencies, but the given skill sets do appear alike, and perhaps that's why he's being "tracked" right now, while the flavor of the month is Mr. Moo Moo. If the negotiations for Mutu fall through, then perhaps Thiago's the drunken bridesmaid at the ready - and an ugly one at that.

As with every transfer rumor, the smart money says the next step won't be made until Mutu makes a decision on the color of his kit next year. So that's why the ever-reliable offerings of the Italian presses have been vague and infrequent - because Roma's interest is probably both of those things.

I) After being the object of lust for Blackburn, Celtic, [insert English team here], etc. and Matteo returning the favor with a lingering pat on the ass, Signor Brighi is now close to an extension. I swear, this cat's middle name is Uncertainty.

II) Celtic, among others, would love them some iTunes. Quite obvious he's going to be let out for a walk, hopefully on a short leash, only question is where. If he's sold because he was a Conti buy, not a Spalletti purchase, I shall wish him well and will sleep soundly. If he's loaned, I shall wish him ass loads of playing time.

III) Toto DiNatoto's agent has quashed any rumored move to the Eternal City. Oh me. Oh my. Woo.

Can you feel my indifference?

IV) The suits are tracking Javier Saviola once again after he snubbed Roma in order to swap shirts in the El Clasico for, uh, more playing time. Yeah, playing time.

Real's Argentinian bench ornament would seemingly be receptive to a move the fuck out of Madrid after this last season, and that puts a whole host of teams on alert. Other teams taking a peek are Juve, Napoli (shocker), Fiorentina and, you guessed it, Wolfsburg. Rumors price is 5m. Doable, definitely. He'd be like buying Giuly but younger, taller (no, I'm not kidding), and like 37 times better at the same price.

Topically it's nice, but plenty more for consideration. Namely that whole height thing. Can we get a goddamn six footer in here? (Now taking applications.)

V) And now the best news of the day, a certain someone was spotted at Trigoria today: