Rolling Back The Years; Or: Welcome Back Fab Quags Rumors

Share All sharing options for: Rolling Back The Years; Or: Welcome Back Fab Quags Rumors 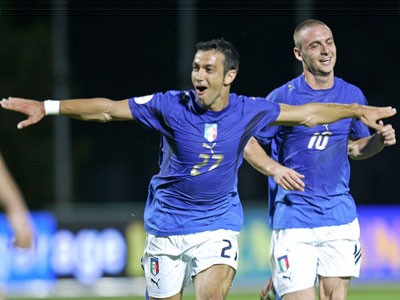 Whew. I was starting to get worried for a minute there. I though the boys were going to have a decent preseason and screw the whole campaign. Now like last season - right before that hot start - they've done gone and gotten hammered by the opposition and we're back on track. Like Juve last year, it's 5 in the back of the net and everything is butterflies and cupcakes and unicorns again. Group hug.

We're all going to be up for canonization at the end of the year, I'm sure of it.

I'm getting flashbacks to last summer. The incessantly tantalizing quotes and viciously lecherous suggestions of life as giallorosso for Mr. Bullshit Goal and the subsequent impact it had on my life. The back and forth hemming and hawing, the drenching night sweats amidst tangled sheets, the visions of Alessandro Rosina dancing through my dreams.

And yet I still cannot answer two questions:

The two questions can potentially be answered independently, but they do pretty much go hand in hand. If he's legit and going to at least maintain his last two years of productivity, if not improve upon them, for a big club, not a UEFA Cup squad....damn, what a purchase. If not? Say hello to a way, way, way more expensive Mauro Esposito - Napoletano and all.

For now? The answer is I can't see a reason why he isn't worth a shot. There are few more Serie A tested players capable of scoring a dozen plus goals from the wing, and absolutely nobody who forces more soiled undies for keepers once they enter within 45 yards. If he's productive, how do you think anyone, even Gigi Buffon, would like to see an attacking line like this coming at them:

Speaking of soiled undies, I'll be right back.

If we enter into the rumor using that dirty five letter word logic, it's a no go. Pietro Leonardi, nuck futter that he is, would rather sell Fab Quags to FC Jupiter's 3rd Moon for the comely price of Hepatitis C than Roma.

"A transfer of Fabio to Trigoria? I don't want to comment this rumour which appeared in the press," declared the general director to Romanews.eu, clearly annoyed with this speculation.

From my limited experience, he'd be annoyed were Monica Bellucci to show up nude on his doorstep towing wheelbarrows full of cash, so we can't really take much from that.

But even if Quags were to hit the market, Rosella & Co. would probably have to offer up the world and a half to pry him from Udine. Something tells me the €10m plus Mauro Esposito and Marco Andreolli (co-ownership at worst I hope) won't get it done - even though it is a steep price. Lyon had €15m turned down and they're outside the league, so logic (once again, that dirty word) dictates a team that has drawn Leonardi's ire in the past while also within the same division will have to properly Vaseline up before any type of negotiations. So we'll see. Tantalizing, but complicated.

Now watch some legendary YouTubes of Fab Quags as you forget Mutu and Huntelaar and Silva and very big name linked this summer, then wait for your dreams to be invaded by Mr. Bullshit Goal himself.

• La Bestia is but a mere formality, and all that's needed are for the final particulars to be put into place over the next few days, or even week. Whatever. Let's just say Rosella & co. look to have essentially traded a gifted but wildly inconsistent, pouty and lazy Brazilian attacker for a.....gifted, productive and hard working Brazilian attacker. Not bad, eh?

• David Suazo is the back up plan should all the other options fall apart. I can think of much worse. Like last year's Mancini.

Apologies for the lack of updates, I've had family in town among other things. Regular service resuming within a couple day.