Totti. It's All About Totti.

Share All sharing options for: Totti. It's All About Totti. 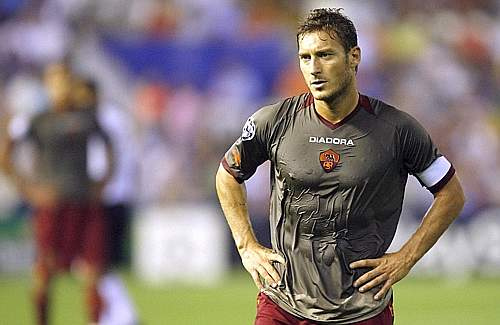 Today he's expected to take the pitch against Frosinone for the first time since that nightmarish day against Livorno. Minutes? Insignificant. Impact? Nonfactor. Gameplay? Please. Everybody else? They'll have their days. This one's all about Totti.

Chances are this will be fairly brief. Certainly not 90 minutes, even though it'll amount to an exhibition of a scrimmage, if there is such a thing. But all that matters is that #10 is wearing the armband and touching the ball on the field of play. The greatness will fall back into place in due time. Now? We enjoy it.

Game's at 2030 CET, 2:30 EST. No sign of streams yet but rest assured thousands of Roma fans will be scouring the net beforehand. Check back early and often. 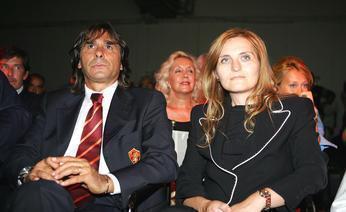 The Convoy has dispatched to Madrid and is now a dinner Madrid meeting (or maybe they went elsewhere for a nightcap) with Sir Baptista' reps in an attempt to come to personal terms with the manbeast last nice. That's nice. But what's great is that it's not just Daniele Prade and Bruno Conti - they've brought The Closer. Oh yes, Cristina Mazzoleni is in tow. and as everyone who knows anything knows, she only goes if a deal is going to be made. She handles the actual transaction of monies and all that junk when deals are definitely going to be made. Last year during the Chivu debacle Roma News - Rome's finest crew of stalkerazzi - had a man on her at all times, and finally broke the news when she was whisked quietly away from the offices in a dark car to make the trip to Milan, indicating a deal had been made. So if she's there...

An "unnamed Italian club" has made reportedly made a 15m bid for Joaquin of Valencia. So who needs a winger? Roma. Who's got 15m ready to be spent? Roma. Who was linked to Joaquin before the Mutu lovefest began? Roma.

Where there's smoke? Maybe. Inter's always lurking for wingers that don't speak Italian too. If it is Roma, this has nothing to do with Baptista and more to do with the two lateral wing spots. The two are wildly different and play different positions, not to even begin assessing their skill sets and areas of comfort.

And without going into too much detail because he's been linked before: yeah sure. Uber talented. Overly uber, if there is such a thing.

Because of the game tomorrow, with the presence of You Know Who, and the suits in Madrid taking care of this Brazilian thing, it's more likely nothing more that isn't conjecture will be heard until Friday at the earliest. However, if you happen by the Madrid airport within the next couple days, and see The Convoy eschew the Alitalia terminal for an Iberia flight headed to Valencia.......

I) Mauro Esposito has been declared a surplus of shittiness and is now being pawned off to future relegation contenders. New name: Chievo (and they aren't denying). I like Mauro and all, but it's becoming quite clear why he could barely even get a whiff of Coppa action last year. He's like a homeless man's Francesco Tavano. Good Christ.

II) Threw a mini party here today fresh with games - pin the tail on the pinata and whack the donkey - and heavy drugs when Yossi Benayoun rushed onto the pitch to suck ass against a Belgian team, much like the entire Liverpool squadron. So that means he's cup tied and you can cross him off the list. Woo!

III) The two ex-Romanisti I hate the most are now in Oil Land whoring themselves out for a paycheck they can't get anywhere else because they suck too much. Mido's now somewhere over there being whiny and belligerent and not worth the hassle. Suckers.

Next up: Sammy K.

“This year is Roma’s year. I would put them on a par with Inter....I don’t know if they will win something important but they can achieve one of the two main objectives and they still have time to reinforce the squad.”

Think he's onto something here.

I also loved this little piece:

“I have already spoken to Claudio Ranieri, Cesare Prandelli, Jose Mourinho and Luciano Spalletti and all the Coaches who are involved. They know that everyone has to be available."

What the fuck did he call Mourinho for? Just to chat?

V) Terrible news for the Pisnoli and De Rossi fans as Tamara's, Daniele's wife, father was found dead from gunshot wounds south of Rome after what looked to be a week of deterioration. Massimilianoli Pisnoli had been involved in shady dealings, but it's nonetheless very tragic and all thoughts and prayers to then.