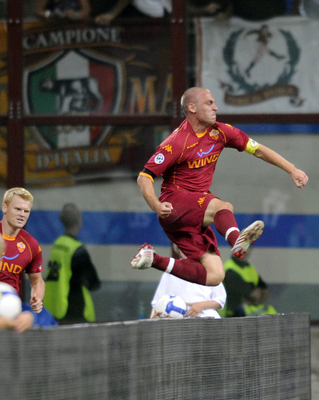 On formation....I think it's safe to say that's the first and last time we'll see that first half formation this season. Borne out of necessity more than anything else - the bastardized combination of a packed hospital ward and JV players called up to fill spaces on the varsity until the new recruits come in - it was clear throughout that first half that spreading the field and starting from wide positions rather than ending there was squeaking up the joints a bit. Second half, even though it was far from ideal with roughly 17 central mids on the pitch, was a significant improvement as they stretched a bit. They'll be mighty fine one week from now, whatever the case, because I suspect we'll see a fullback push up if deals are still being drawn and Taddei is still nursing his tenderer parts.

On Okaka......I was incredibly impressed with him today. Not so much that he's ready to be an integral part of the grand Roman scheme, but more so in that he was composed and skilled on the ball, not to mention doing so out wide, during a game which could seal his immediate future.

It really is a toss up for me at this point whether or not he's best off remaining in Rome to play against the bottom half of the table and Coppa sides or going out on loan for 30-odd games or so. Leaning towards the former at this point for the sole reason that no club is going to give him the education a full year under Spalletti will. Going to Bologna will be great for his personal development, but can't honestly say it'll make him more ready for the Roman 4-2-3-1 next year. And that's quite important, because he is the future. True gem, ladies & gents.

Now if he'd just do something about that goddamn hair.

On DDR........Goal aside, far from his finest day, and as much was to be expected. Can only imagine it's been a physically, mentally and emotionally draining ten days. But what a goal it was.

On Juan......as soon as he began his run up to the ball on the spot I arose from my chair and prepared to leave the room. It appeared as though he was tiptoeing lightly through a minefield en route to performing brain surgery on The Poobah. The man is just not a PK taker, so let's hope that's the last one.

On calamity defending.....Balotelli's goal was a combination of an unlucky bounce and some boneheaded defending. On a decent day, Roma can get away with one at a time, but not both. Let's hope everyone's still frazzled from internationals this week and all will be back on track next weekend.

On the newcomers.....first of all, Riise was asked to defend an entire flank against a pure winger and a fullback who fancies himself one for the first 45 minutes of his Roman career. Watch the second half v first half and you'll notice things changed a bit. Really not a game to judge he or Cassetti on.

Now, that said, it's going to take a great deal longer to asses either JAR or La Bestia. Riise had a herculean task ahead of him and Baptista was played largely out of position while he's still fishing for clothes out of his suitcase at an extended stay hotel. With time, they'll improve massively. After all, Spalletti's system is not one you walk into game one and blend in seamlessly. It takes actual game time - not training or friendlies - to get in sync. Time is all.

On Pizaman.......I really do love the little guy. He's going to take years, maybe even decades (in conjunction with Doni), off my life with all those fancypants moves in places he shouldn't, but he's Roma's Little Engine That Might Have Been Able To If He Wasn't A Midget. Can't fault him for that. Watching him go into a tackle is like watching a car crash. You know you don't want to watch, but you end up doing so with a grotesque look on your face expressing, "oh, that's not good".

But it really was marvelous watching him grace the pitch once again.

On refereeing.....it was a wonderfully refereed game, honestly. But then this:

There was controversy as Roma won the toss, but the referee insisted on taking the kicks under the end with the Inter supporters rather than the one with the travelling fans.

Nothing ever changes, does it?

On 2008-09.....they adjusted, they fought back, and they damn near won with a bunch of guys basically just thrown onto the pitch and asked to play somewhere, anywhere. Once again, in a year they "can't compete". 'Nother year, 'nother load of manure. Can't buy the football, ladies; this is about to be one hell of a ride.