Share All sharing options for: The Prodigy, Champions League & Jesus 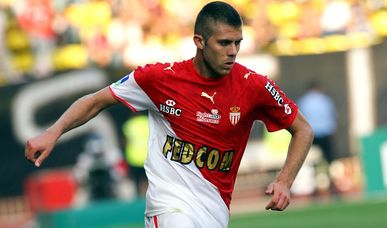 Did you hear? No? Must've slipped through the cracks then. Anyway, here's the news: Roma signed Jeremy Menez. Yes, it's true. The next Zidane, Platini, Henry, Buddha, Gandhi, Jesus Christ of Nazareth, Howard the Duck and Papa Smurf is officially your newest giallorosso. Party time.

I wish I could've reported on this sooner, but I'll be honest: I've spent the last 24 hours plus watching his YouTube highlights and mopping up the drool. It'll probably take a few (miserable) trial runs before I come up with a nickname for him, but I think at this point FIFA is a sound launching pad because he's like watching a video game. People aren't supposed to be able to do that stuff while going forward (CR3.5 does without actually going anywhere, which is an entirely different kind of impressive). I mean, it's just, for lack of a better word, stupid.

Now, I'll also admit something else: I've wanted Menez more than anyone else since I first heard his name in the same sentence as Roma. More than anyone all summer. More than anyone in the last few years, in fact (yes, even more than Mario Gomez). Like a lover scorned one too many times, I've kept my heart under lock and key in order to keep the fall at its minimum. Well that's a worry no longer.

The reason for the excitement? YouTubers aside, Roma hasn't made a purchase of a player with this type of upside since a certain someone a few years back. A certain Antonio Cassano. This one wasn't about replacing Mancini - they ended up paying more for Menez than Inter did for Amantino, after all - it was about doing something they should've done two years ago: replace Cassano. The first attempt was with Mutu, an excessively creative type who can finish his own a bit. Same deal with Menez, though he'll take a bit to polish off those finishing booties. Not to say he has the same talent as Antonio or is a like for like replacement - he doesn't and isn't, Menez is much more wing-oriented - but the same intent is there. Can't really explain it properly, but it's there. That amazing ability to create, score, and become your team's goals. That's it.

But what I'm most impressed with from Menez is what he sacrificed in choosing Rome as opposed to waiting another 6 months or year in Ligue 1. See, because he's now within the borders known by some as "Italia", he's sliced his national opportunities down to the bone, and this in a time when he's mounting serious consideration for a national call. He mentioned it last week, that one of his main objectives for this season is a Les Bleus call. Not in Rome. Not with Domenech's astrological whimsy still calling the shots. For me, that's a major sacrifice which shouldn't go overlooked.

And on that note, at least Philou will have a friend to hang out with during international breaks. (Yes, he was called up again, but things will revert to status quo soon enough.)

All that said, all that hype poured on, expectations need to be kept low. Perhaps he's a victim of his own success, being so talented, such a phenomenon at such a young age - youngest scorer of a hat trick in Ligue 1 history at 17 and all that. The kid's only 21. Just last year we were looking at Vucinic, Aquilani and Curci as "youngsters", and he's at least 2 years younger than each of them, and expectations should reflect accordingly. Spalletti mentioned today the technique is there, which is abundantly evident; but if technique was the be-all and end-all, futsal players would be shredding grass like John Deere. Needs time to adjust to Serie A, adjust to Italy, adjust to The Poobah and - without meaning this as a slam on Monaco - adjust to being on a very good team.

Actually, this brings up the bigger point that Menez has sometimes been called selfish and inconsistent. The latter will come with age, but the former is a phenomenon often seen with players of his caliber on a squad which isn't of quite the same quality. They try and do too much because they are simply the best individual option and, in turn, it can come off as arrogance or selfishness. Monaco has some good players, but entrusting a pass to Nene or Lucas Bernardi is not exactly the same as entrusting a pass to Francesco Totti or Daniele De Rossi. And this is where he'll thrive, allow those YouTubers featuring jaw-dropping runs and cone-drills through defenses to morph into a more complete package, including a few more cheeky passes and a few more off the ball runs into space. This is where he'll fulfill that massive talent as one of XI, not Jeremy Menez. We can see it, it's all there, but we have to wait. And this is the single most important reason this purchase has me like a kid on Christmas morning who's stumbled sleepily down the stairs to find a big box with two giant wheels sticking out either end. I know exactly what it is, and I can barely contain my excitement, but the parents are still in bed and I need to bide my time patiently...

Even though I want my goddamn bike right now.

Basically, it's a Rosella special: €10.5 up front with €1.5m due each of the next three years if Roma makes the CL in those years, capping it at €14m.

And to be quite honest, that's a thievery considering some of the numbers being thrown around even earlier this summer and last year.

I'm sure everybody knows it's Chelsea, Bordeaux and CFR Cluj at this point, so let's jump right into it:

CSKA London.: Even though it's a tough draw, I'm happy; simply because I think those will be some seriously fun games to watch. And sometimes, we're just fans.

Although I was going to bed with dreams of Lyon dancing in my head - as I'm sure were the fans of every other team not in pot 1.

Bordeaux.: I'm happy because they're French and this is one of the easier 3rd pot draws Roma could've managed. They were good last year (not to mention really making a run at the title after being dumped out of the UEFA Cup), but being good for France and being good for Europe are two entirely different propositions. Plus they're French. (Did I say that already?)

CFR Cluj.: I have no fucking clue who they are. I know they won the Romanian double last year and that's really about it. Suppose that's a good sign.

And really, until the games? That's that. It's a group Roma should advance through without a huge hassle, maybe a nervous game or two at worst, but this squad has made some big purchases this summer while some of the younger players are a year older and a year wiser. It's going to be a good year, and the Champions League will play a major part in that. So there.

Almost definitely will not play this weekend after that knock he took from Maicon last weekend.

Ya know, was the SuperCoppa really that necessary......

I) Okaka is staying - at least until January, one would presume. Thrilling news, really, if only because he's a Roman product with some amazing upside and, at 19, anything he provides is a bonus. These are the teams we can watch with pure hope and few expectations.

II) "People" are saying the mercato is "closed", but "people" also said the same thing last summer (lookin' at you, Bruno) before they bought Cicinho and made a last ditch effort for some reinforcements on the 31st.

So when a FIFA agent says Roma will be getting "a midfielder who plays in Spain...." your ears start to perk up a bit. If, and this is a big if, he's available for a loan, Royston Drenthe is the obvious option. Kid's like a superball bouncing all over the place, or a Cirque du Soleil artiste during a night out with Robert Downey Jr., defending and attacking with some serious vigor. His only issues are he's supposedly a bit of a primadonna who loves the nightlife, neither of which would sit well with TGIP. Considering Robinho's whining his way out, Sneijder's already gone down and Robben will surely break his hip any moment now, seems like they could use the extra cover. All of which makes me skeptical.

Not that I wouldn't take him, he could teach Okaka a thing or two about hair.

But last time I checked, there are one or two other midfielders playing in Spain. Drenthe is simply where my ideas begin and end.

III) Shame on me for not mentioning these earlier, but The Holy Roman Trinity is now fully represented over in the player blogs section.

Good on them, bad on me.

IV) Roma has a new president: Rosella Sensi. No surprise there.

V) Will do the season preview next week when the dust has settled and the roster is finished so as not to throw my tiny brain into a severe meltdown.