Share All sharing options for: Napoli: Serie Blah; Roma In Need Of Bodies. 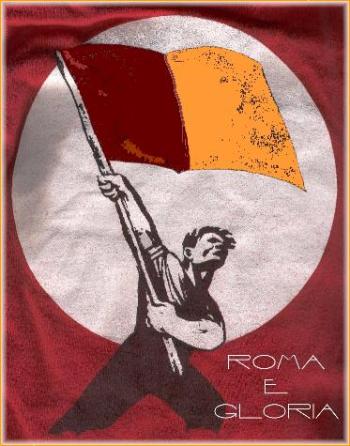 This is supposed to be an exciting, celebratory time, as after a rocky, confusing and sorrowful summer, we're finally being gifted some Serie A football again - and in a proper derby at that. Problem is, the opener's headline has swiftly gone from Luciano Spalletti's Bella Calcio Returns to Roma Currently Seeking Warm/Lukewarm Bodies, Heartbeat Preferred (But Not Required). Trigoria has turned into a makeshift emergency ward and tomorrow's lineup will likely be one The Grand Imperial Poobah would normally be hesitant to throw out on the pitch...for an intrasquad scrimmage. What a way to begin the festivities.

Obviously no Totti (no party), but what's hurt most over the last couple days is injuries to Simone Perrotta (out - Achilles) and Alberto Aquilani (called up, but we shall see - ankle) while Rodrigo Taddei still hasn't been able to shake his knock off and is still out. Also Mauro Esposito is currently being pawned (to Chievo, it seems), so he's eliminated from consideration. Making that...three and a half starters and the only pure winger currently available, all of whom play above the defense, where depth is more than covered (of course - Murphy and all that). This means a fullback will have to push up or Jeremy Menez, in Rome for roughly half an hour now, will be thrust into action against a dangerous side on the first day of the year. Oh joy.

The sexy topic du jour is that Mssr. Menez, because this could open up a spot for him in the lineup before he's even had the chance to use Italian restrooms. Tantalizing, obviously, and even more so because he scored a deuce in training yesterday's scrimmage, but prudent and smart it isn't. Or at least it really doesn't seem that way. Monaco is way ahead of Roma in terms of training and he's already had three games, but two of those were late subs because he's still working off that groin surgery. It's really hard to convince me a 21 year old guy who's been in the country for three days, is just working his way back from injury and has never played at this level before - against a UEFA Cup side, no less - is ready to be run out in the starting XI on opening day. Yeah, he's a monster of a talent but he's just that right now at this level. Not exactly a safe pick.

Then again, I didn't overlook training yesterday so what the hell do I know?

But I do say, it's sort of appropriate that Roma eschews the pomp and circumstance of a new Serie A campaign for drama, mass casualties, body bags and sleepless nights for the tifosi. We'll save the joy and anticipation for next week, they just need to get through this one.

Never a dull day in Romaromaromaland.

So who else in the US will be drinking heavily come Sunday morning at 9am eastern?

I'm mostly agreeing with RomaNews on this one, but it gets very confusing in the event that KA can't play (at least from the start):

Given the first half performance in the SuperCoppa, the vaunted 4-2-3-1 is the only way to go.

If GOMR starts, I can see Lavezzi on the left wing having a field day, breaking his brittle ankles til Spal can make a substitution, which is the reasoning for the Cicinho inclusion. He may not be a lock down defender, but he recovers exceptionally quick and you've got to beat him 2-3 times to get past, at which point help has usually arrived, making things bothersome for the attack.

If Aquilani doesn't play....I haven't the faintest. Logic dictates Baptista could slot back with Vucigol up top, which opens up the left. Riise and Tonetto can definitely play LW, but are four fullbacks an exciting proposition? Is Okaka ready for a start? Will Brighi be the safe choice instead of La Bestia? First guess is Matteo, but it's obviously a decision Spal doesn't want to be forced to make.

As far as subs go, it will almost surely come down to game situation, but I really think we'll see Okaka and that tragic hair.

Lavezzi v Whomever: If GOMR plays, he'll need five, maybe six, Vespas. If Cicinho plays, he'll be recovering til he can recover no more. If Lavezzi is on the right and a certain ginger Norwegian is there, Riise is going to have to learn calcio at a mindblowing pace. If it's Tonetto, somebody's going to have to convince him he's 23, not 33, before the game.

I think they can contain him, but it's a daunting task to begin the season and everyone's going to be helping everybody else. People helping people. Lovely.

Intertoto Cup and UEFA Cup have turned their preseason into season, so they're running on all kinds of cylinders right now. They did well against Vllanzia, 8-0 aggregate, but it's pretty easy to KO a heavybag: Trabzonspor beat them 10-0 on aggregate last year. Clearly they (Vllanzia) aren't a very good team, which may in fact help Roma if Napoli can be lulled into a false sense of confidence (doubtful, but it'd be nice).

Still, the guys are banged up, relatively untested and missing quite a few pieces. They'll have to hit midseason form by the opening whistle...ish.

Roma v Health: I think this is pretty self-explanatory, but they can in no way, shape or form handle a non-defender going down in either the first half or early in the second, because it can potentially shift the entire squads into depths unknown and severely undesired. And, as well as he did during some friendlies, I'm really, really not looking forward to a cameo from Burritos (much love, Edgar).

* - As cruel as it is giving us Roma's opener before a two week int'l break, I think we can all be very thankful.

Beast v Striker: The Roman striker position is one unlike any other, and though Julio's not a true striker but an attrequiker (attacking mid/treq/striker), making him a better fit than most, it still involves some unique responsibilities that you don't pick up in two weeks. Or two months, even. Early last season it was as though Vuci's left leg was six inches shorter than his right because he kept drifting to comfort on the left when replacing Totti, leaving someone (usually Simone) as the makeshift striker. La Bestia is a centrally based player, which should help, but he still doesn't have the repertoire needed for that Totti sprinkler role back towards the half.

So the largest key to attacking success against Napoli will likely be, gasp, Fancypants (that's Little David's new nick).

Much respect to Napoli, but this is less about them and more about Roma. If TGIP can throw out a solid lineup with some semblance of chemistry while also playing their brand of football, they should take home the spoils at home on opening day. The adrenaline and tifosi will help, but the D will be vastly improved, with Cicinho actually understanding the system, Gianluca Curci getting some proper pre-schooling and Matteo Ferrari anyfuckingwhere but Rome - not to mention Ludovic Giuly back in France (he was guilty for one of those Napoli goals, I believe). Defense is the one area that isn't of an enormous concern right now, and the talent upwards is still enough to do some decisive damage.

(It's week one and the depth is already being tested. Nothing like an early trial by fire.)

* - And this year, because I'd remembered it exists before April, I'd planned on purchasing SerieA.tv to eliminate problems. Guess what? Their website is still not up, "available soon". Brilliant. Their entire shtick is Serie A and they aren't even prepared for opening day. Amazing business acumen. So anyone planning on purchasing, you'll have to wait and resort to streaming for the time being.