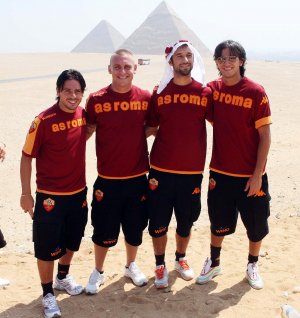 By some minor miracle the game was actual streamed today so if you had nothing to do or sit in a cubicle where you can constantly peek for oncoming threats, you were able to watch the game. Nothin' special. Good old friendly win as the boys get closer and closer to fitness. A few things I wrote down during the game:

• Okaka has an acute case of Pippo-itis. Constantly offside. Hear the cure for that is showering, which Pippo hasn't done since October 1993. Missed a sitter at the end too. Still, he's not that far away. Had a perfectly legit goal called back. Though he may wanna work on the hair. Buns only work if you're from the Iberian peninsula. Just ask Camoranesi.

• The absolute best thing Roma could do this mercato season is get King Alberto healthy. Seriously. Screw money, where's Doogie Howser M.D. when you need him?

• Espo just looks lost. And like 7 seconds after I typed this (taking notes), he scores a goal which Cicinho assisted on from the fourth row of the stands. Wow these officials are shit.

• Steaming run from Brighi on his goal. Love to see that from him.

• Burritos Alvarez was doing the only thing he can do: push the ball ahead and hope to run by everyone. Luckily they were playing in Egypt and he could.

• Sebastian Mladen played. No idea what, if anything, this means, but given Spalletti's recent aversion to youth, bringing a 16 year old to Egypt and playing him is promising. Or maybe he's got a Romanian quota. Hence Pit and the now archived Project Mutu.

There's actually a plausible theory somewhere in there. Who knew?

• Simone Loria looks like something, just not a footballer. Can't figure it out. Maybe a rugby player. Or my doorman. Keep you updated until I figure it out.

• This three Brazilian keepers shit is going to shave decades off my life.

Highlights and goals after the jump: