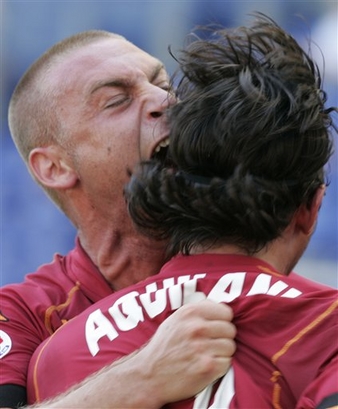 Of course you saw it coming. Everyone did. After the initial joy of Fabiano Santacroce's red card it was "shit, wait...this is Roma". And it happened. Handing Roma a man advantage is a fate worse than handing them the red. Can't play against 10. Just can't. And to be honest, about 15 minutes later I was hoping for a Roman red card to even things up a bit and spread the field a bit more (thinking either Cicinho or Fancypants, who desperately needed an O2 tank).

But it didn't start there. First half was great. Second? Not so much. Once again, it was a combination of two things: fitness (didn't have any, as much was expected) and this overwhelming sense of complacency whenever they walk out onto the pitch for the second half with a lead. Maybe Spal's the worst halftime speaker in the history of sport, or maybe it's in protest for not having enough orange slices, but they just looked flatter than flat from 45:00 on.

However, we'll hold off impending judgment until they've hit fitness and form, because it was pretty clear everyone was gassed towards the end of the game and in week 4, this might be a commanding victory. Knew it going in and know it going out. Now finally, one week into the season it's time for an int'l siesta. It's been too long and the lads need some time to gel and the walking wounded need some more R&R.

In fact, I still don't feel as though the season's began. It's just not registering, and I'm not quite sure why. Perhaps because of the super new faces in the lineup (Baptista, Riise, Menez) replacing old standards we've become so accustomed to (Totti, Mancini, Perrotta, Taddei - in effect, the entire attack). That and the upcoming break. So I'll wait to actually put up ratings until the next game. Yeah, it was a legit game, but it still doesn't seem right. In lieu, some things to be taken away:

• John Arne Riise looked really good. Helped actually having someone in front of him this time, but he was quality the entire time he was on the pitch. Love how he's adapting to this whole Roman gladiator motif with blonde tips, too.

• Okaka Ma Chuka. This kid's got somethin', and he might be ready for a starting look a lot sooner than anyone thought. Like, next game against Palermo soon, considering how comfortable he's looked out galloping down the wing. Cut his hair too. Didn't improve much, but we'll take baby steps.

• Alberto. I think I've said this a couple times, but the best thing Roma could've done this summer was get him healthy and in form. Today was a very good start. Plus Perrotta would've skied that goal into row Y so we can only hope he stays out of Trigoria's makeshift emergency ward.

• DDR. Superb pass on Berto's goal. But should we have expected anything less?

* - That neck bulge has me fearing for his health, too. No joke.

• Doni's reflexes. At some point this year he's going to put forth a nominee for Dumbest Decision of All-Time and it'll take months off the end of my life. I'll try and remember today, when he saved the rest of the fellas from embarrassment. My MOTM.

• The uncalled penalty on Berto. They should've won anyway, but having guys pulled down from behind in the six yard box while a cross is flying through without being called really doesn't help. Especially not when there was nothing else for the ref to look at.

• Max Tonetto's ode to Massimo Oddo. I like Max. I like him a lot. But what the fuck was that? Forget a barn, he couldn't have hit the water from the deck of a boat today.

• Julio Baptista & Jeremy Menez. The Beast is just not in sync right now and he was playing out on the left for much of the day - not his shtick - and Menez was just not ready. Period. Not an ounce of blame hangs on either of them.

* - And Menez's sitter was not nearly as easy as it looked. Always going to be a tough goal with Iezzo biting his heels.

• Set pieces. As a whole, they were garbagé. I can't quite remember a half-decent free kick and Napoli's lone goal was on, you guessed it, a corner. This is probably going to be an issue all year, or at least until Jesus gets back.

• Philippe's finishing. The last time Philou played at the Olimpico, we got this...

...and today, he put in a finish of similar quality. Unfortunately, it was towards the wrong net. Only thing that save the day was Doni's feline reflexes.