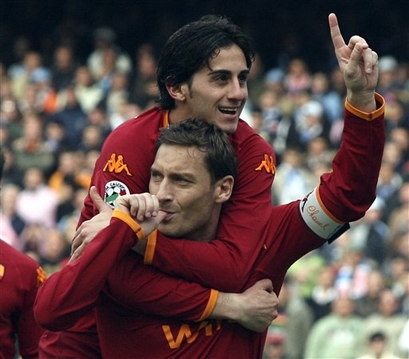 I don't quite know who CFR Cluj is. I don't even quite know who AS Roma is at the moment. Which means I know roughly the same as everyone else: nothing.

Going into this game we were resigned to looking at a lineup that's a smidge beyond patchwork and a skosh before shit/fan. But with a snap of the finger, the squad list is featuring a who's who of Roman legends over the past 3-4 years (which basically means all the resident studs have been called up). The injured fellows outside of Simone and Juan have been thrust into the game's frame, including that Totti guy, and will be, at the very least, available for consideration. Here's to unexpected gifts.

That said, it's a home game, which means injured guys can be called up even if they only plan on making grilled cheese sandwiches at the pad during the game. I'm guessing DDR, Mexes & Mirko will be in the stands tomorrow unless the magical healing fairy visits them overnight. But at least we can look forward to teasing glances of Totti riding the pine, waiting for that nod and Spalletti ass slap as he prepares to sub in - the more likely scenario, even if RomaNews has him in the starting XI. Though they also seem to think the same will be the case for DDR, something which is quite in line with his attitude and personality. Totti & De Rossi? Provided they stay healthy, you'll hear no complaints from me.

As far as the rest of the squad goes....they've got to step it up big time. The only person who had a decent game over the weekend was King Alberto and most everyone else looked to have just punched out for the day after the first goal - which was quite pretty and very Roma-esque, something that's gone under the radar - leaving Doni and the back line to hang, even if they brought enough rope for themselves anyway. Not much inspiration, was there?

And I know I run the risk of sounding like a broken record here, but please, for the love of Buddha, no more injuries. Given the way things are going, I was constantly checking the news portals for "De Rossi - crushed disk" Saturday afternoon just to make sure the world hadn't tilted off axis and all was running as usual with Romans dropping left and right. Luckily, there was a minor shift and DDR is relatively healthy. Even though the next games are against Reggina, Genoa, Atalanta, Bordeaux and Siena, these fixtures should be used for getting the entire team on the same page, not TGIP blindly firing healthy bodies in every which way.

With that...enjoy. They need a gimme game, and this will hopefully be one of the easiest games of the campaign. Cluj is a proper fourth CL seed and Roma is, despite recent history, still a formidable beast when it wants to be. I think the embarrassment of the weekend is enough for them to "want" that, at the very least, or else brace for the fiery wrath of TGIP on Wednesday.

Scholars could debate the possibilities until the end of time. Luckily I'm no scholar, so we're limiting this to a few paragraphs.

Keeper: Doni seems good to go, which, I suppose, is a good thing. At least until Luca Bucci comes in to the fold...

Defense: Buh-bye, Cicinho. I was pretty shocked that he started the game, and I think Spalletti was pretty shocked at how he played. Ditto for Riise, if only because I thought he'd shown himself to be a bit unready for the ways of the Giallorossi - what with being Norwegian and all (hello, John Carew). It also seems at times he has quite possibly the worst defensive positioning on the planet. And not in terms of where his body is positioned in 1v1 situations, I just mean when it comes to being in the same zip code as a live body on his wing. He just kinda lumbers up the middle of the left wing. Doesn't typically get too far up, doesn't get too far down. And the GOMR-Loria tag team duo should probably be given a rest, but they're the only legitimate CBs left. So the back line should look something like this:

More experience in the system and thus a bit more stability.

Midfield: This is a crapshoot depending on whether or not DDR plays and whether or not Fancypants can find a brain between now and the time the game starts. He's just too much. There's no coming back from his bad games. As much as he might mean to the squad on his good days, he's far too integral, putting up MOTM performances, for the opposition on his bad. May even find himself riding some pine this game if DDR is capable. I'd be more than pleased with a Brighi-DDR partnership if Matteo's doing the dirty work and Daniele gets time to sit on the ball. I won't be pleased.

Daniele's too headstrong to sit out after the disappointing start to the season and TGIP is too in love to sit David. (Contradicts my statement in the third paragraph. Don't care.)

Attack: Guys who have to start: Baptista, Aquilani, Taddei. The cream filling because he's one of a few Giallorossi in decent form right now and the Brazilian Oreo cookies because there aren't really any other options with Mirko questionable at best and Simone having his feet re-bronzed as we speak. Then there's Totti. Oh, Francesco. I say he comes on as a sub as he did against Inter in the SuperCoppa, which leaves an extra spot open. Okaka? Wouldn't be terrible. Riise on the wing or in defense, pushing Max up? Seems like a wing partnership of an out of form Taddei and Max/Riise would have us yearning for a Pit-Virga partnership once they start going forward. Menez? I honestly think he's the most likely option right now with Totti earmarked as his substitute. His groin still has a bit to go before full fitness, but he did play 87 mins for Monaco in the CL, has come on for an extended cameo twice, and can simply be given an hour max or so on the pitch. So maybe a little something like this:

CFR Cluj
Here's what I know about them:

There, I've taught you everything I know. Anything there sound scary? Didn't think so.

I don't care how crappy their form is right now. Palermo can be, on its day, a good Serie A side. Cluj is nowhere near Palermo. They should wipe the floor with these guys. (Respectfully, of course,)

Streaming: Here.
UEFA: They've got an official ESPN stream available for $7.95. I've used it a few times but haven't had much luck - very jumpy ad occasionally crashed - perhaps others have been more fortunate.
Liveblog: Here, of course.