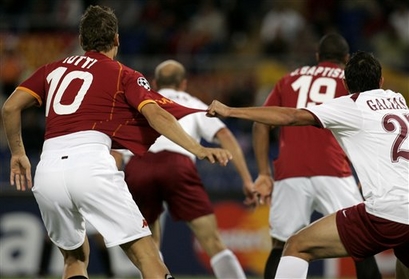 We'll start off with Spalletti's post game words, which seem to be pretty on the nose in this situation. Thieved shamelessly from C4:

"We did some things well and others badly, just as we did in Palermo, and lost the game. In the second half we were disorganised and Cluj were lucky on that second goal," he said after the 2-1 home defeat.

"The team got tense and it was difficult to express our quality at that stage. The problem is both physical and psychological. When the results don't come, you lose that relaxed approach and can't make the most of chances."

Romanian side Cluj made their all-time Champions League debut and earned a shock victory at the Olimpico despite Christian Panucci giving Roma the lead.

“I tried to re-organise the team and make them pacier with the players I picked and, aside from about five minutes where we struggled and conceded the equaliser, I think we did well in the first half.

“The problem was that we got caught up in the desire to turn it around and lost our sharpness. I admit I expected better from the second half, as we have the players with the quality and character to give more.”

The Giallorossi were without Philippe Mexes, Juan and David Pizarro, losing Panucci after the break for an entirely makeshift central defence.

There were many errors at the back, but the side was also disappointing in attack and has now picked up one point from two Serie A games and this 2-1 European loss.

“I was pleased to see that the players were distraught at what they had done at the final whistle,” said Spalletti.

“They realise they have to completely change their approach and performances, as it is at this stage they can begin to turn things around.

“In the past, despite losing occasionally, the team always created chances and pushed forward. Recently that hasn't been happening as much.”

His final substitution was Vincenzo Montella despite Jeremy Menez warming up for much of the second half.

“Cluj were pinned back into their own half and so it was pointless trying to run down the flanks and take advantage of space, as there wasn't any.

“It was better to get someone in there who could put it in the net and go through the middle.”

“We knew Chelsea were the strongest side in our group. It's not as if we were hoping they'd trip up! The fact remains we need to do better and work hard, making sacrifices to fight our way back into the group.”

I think it's fair to say a lot of factors were going against Roma heading into this game and forcing his hand with injuries always made this a less than pleasant task. That said, it's Cluj - they should've romped their way to the after party - and the psychological aspect is something we've seen before. Actually, it's something we've seen in the first three games of this season alone; Roma gets the lead and all of a sudden start moping around like the community bong made a cameo. For me, that has always been Roma's, and consequently Spalletti's, great Achilles heel. They've lost before they lose, and his in-game motivational management is severely lacking, if not completely non-existent.

There will be a lot more later, but one last thing I said immediately after the game had ended:

[3:39:23 PM] Calling it right now: Ancelotti and Spalletti will swap jobs by November.

Not saying I'll necessarily advocate or hope for it, but you can be damn sure Adriano Galliani will have Rosella on the phone within the next few days - and I don't think she'll hang up.

As always, I can't pay detailed attention during liveblogs, so take these with a half of a half of grain of salt.

Doni: If not for Doni in the first half, this game could've been much worse. I haven't rewatched the goals and don't plan to, so he gets a pass. 7

Cicinho: I like what he does going forward. A blind cripple could defend better than he is right now. And what's his percentage on crosses actually doing something mildly productive? 1.7%? 4.3

GOMR: The only piece of stability in the back and provided his trademark near post header on the goal. And then he wound up injured. Just like CBs 1&2. Is it too late to talk Aldair out of retirement?* 7

* - If it's serious, they may have to consider looking at free agent possibilities. Cassetti as your 1st CB isn't going to cut it. Wonder what Sammy K is doing these days.

DDR & KA: I don't even know. I missed them more than anyone. 6.5 - You can discuss whether that's each or combined.

Taddei: Can they quickly assemble a friendly for Thursday so he gets some semblance of match form by the time Reggina rolls around?* Given the fact that before Palermo he hadn't played a competitive game since roughly last winter, I find it hard to blame him. N/A

* - That's nice Roma was handed a gimme this weekend. Except I can smell a second half Franco Brienza brace to steal a 2-1 victory. Maybe Catanzaro's youth team could be given a Serie A cameo for the weekend?

Riise on the wing or in defense, pushing Max up? Seems like a wing partnership of an out of form Taddei and Max/Riise would have us yearning for a Pit-Virga partnership once they start going forward.

What a fuckin' dream a Pit-Virga wing partnership would've been today.

I don't blame Max so much - though at some point he and Cicinho need to realize crosses don't work that well for this squad - as I do Spalletti's opening lineup. Maybe Menez is hurt, but I'd much rather have seen Brighi next to DDR, Aquilani at treq, Mirko out left (where he was lethal once Totti came on) and Beast up top than Tonetto - Guy who's been in Rome for 3 weeks - Yesterday across the front line. 5.8

Beast: Still waiting for him to show up. 3.1

Vucinic: For being questionable, he was deadly, especially in the second. One of the very few bright spots. 7

Totti: Looked exactly like what he was: coming off an injury and lacking game fitness. N/A

Montella: There was one play where Totti & Montellea flashed their chemistry, knowing exactly what the other was going to do and where they'd be. Unfortunately both are devoid of match fitness and Monty's getting up there in age, but it speaks a bit to how much this team could use continuity. And not "we bought him in June" continuity. I'm talking a lineup in front of the defense featuring De Rossi, Vucinic, Perrotta, Taddei and Totti continuity. The type of thing you can only form over years, not months - which is why I think this "they waited too long in the mercato" business is garbage.

That said, Monty gets N/A as well. There was no one available on the bench today who was going to make the difference they needed.

Spal: I have no gripe with the subs, but I never would've given two seconds thought to that starting lineup. And that's before we discuss this team's mental makeup.... 1.9

And with that: it's wake up time.