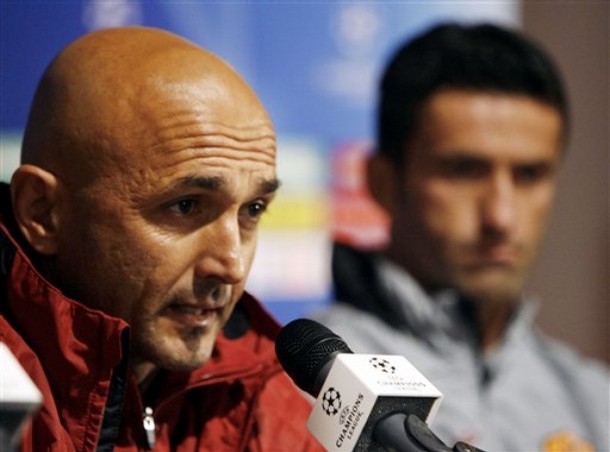 And to do so one thing must be said before all else: this mini crisis is in no way, shape or form his fault. There are a countless number of factors at play here, most of them inherently anti-Roma bastards playing with voodoo dolls, and the blame can be spread evenly across the team. That is, aside from all who've fallen victim to said voodoo doll. So the question isn't why has The Poobah failed Roma, but why can't he fix that which seems to be broken?

As I was writing everything begun to sound very familiar, then I realized I'd essentially said much of what needed to be aired out here in a post at the end of last season. Time irrelevant:

I’ve had more doubts than I’ll ever let on. Tactically never a question, but the way this team operates sometime really brings to question his ability to extract the right mentality from this team, the first and foremost quality for any great coach, teacher, leader, etc. in any aspect of life. His football mind is top of the mountain, maybe a bit higher, but otherwise, I can’t honestly say I’m sure he’s a coach that can lead a team to greatness. That overwhelming sense to will themselves to a win. To defeat regardless of tactics, blow up the gameplan and just win.

What I am confident of is that Spalletti as a coach, much like the team, is still absorbing, growing and progressing. This is also a learning process for him, and sometimes I, perhaps others, forget that. He is by no means a finished product, and is in some ways representative of the team. Heralded for his workings in Udine, but not yet considered world class. Experienced, but not experienced enough on the largest stage. His rise has coincided with the rise of Roma. After all, he’s just 49, still but a pup in the world of big game coaching.

My feeling is next year is it in terms of assessing Spalletti’s impact on this team. If they can grow mentally, I will fully believe and plan four plus children just so that I can spell out The Grand Imperial Poobah on Christmas cards. (I’ll feel might bad for “The”, but he/she will have to deal with it.) I do think they will grow mentally, and that’s not more hope than belief. I do believe that. Spalletti and the core has more experience now, more failures and successes to guide them in the right direction. This will be invaluable, and in the end I believe Spalletti will be invaluable. The journey continues.

Change? None. If anything, matters have gotten worse. The late game collapses and high pressure meltdowns have not ceased, they've snowballed. The late game collapses are now post-first goal collapses and the "high pressure situations" have gone from European ties at Old Trafford to hosting Reggina - I'm not quite sure, aside from magical bankruptcy, there's any more drastic a dive than that. Which brings about this:

I do think they will grow mentally, and that’s not more hope than belief. I do believe that.

Revert back to hope now. We can hope that this little bump in the road is truly a product of all the injuries and disruptions popping up daily, not to mention the turmoil of the last few months. Maybe this tough start will strengthen the team for the long run and prove to be a boon, rather than a burden. But at this point I just hope to return to "thinking they will grow mentally", much less doing so.

Obviously Spalletti is a masterful tactician, but there is still something missing away from the technical side, away from the squad list and away from anything else you'd care to read about the mercato or ownership. It's their confidence over 90 minutes. Could it be the key to get this team to the next plateau? I think so. They don't have the mentality of a winner. They seem to be confident they're better than their opponents - with one obvious exception - but not confident enough in the win, which is far more important. That's instilled by the coach, either directly or indirectly. Not here. Something which we hope, again, will come with time.

Can Spal fix this crisis? Believe so. After all, this is hardly comparable to the crisis he walked into. This is a Sunday walk in the park. But can he fix the faults which have plagued Roma for the last few years? Hasn't shown any indication just yet. Then again, there's nothing to say they can't succeed without actually those faults. This isn't permanent. This is an era, and plenty of successful eras have gone on with things tucked neatly away in the back of the closet. But it would probably be a whole lot easier if they could adopt the persona of a complete team.

Now there are rumblings, however accurate they may be, that TGIP has "lost the locker room", which leaves us just as lost. His words to the press always seem appropriate, which would lead you to believe the same were true for his words behind closed doors. However, at least two spats with players have leaked out into the open in less than a year would have you thinking otherwise. So which is it? Is he the bright, witty, respectful, modest coach behind closed doors? Is he someone else entirely? You won't find that out from the players, so it's impossible to find out anywhere else. After all, the locker room is the athlete's sanctuary. We'll just have know nothing and move on. Right now, as rumors might lead one to believe, there's no telling if Spalletti has lost, or even divided, the locker room. Once again, we can just hope it's a bump in the road and nothing more.

If it isn't, where does that leave Roma? Watching Milan very intently, that's where. Not because of who Spalletti and Ancelotti are as coaches, but because of who they are as people and what they've accomplished with their current clubs. Both have undoubtedly taken the club they inherited and progressed appropriately. If nothing changes, we could just say Spalletti's tenure in Rome has run its course, as appears is the same case with Ancelotti in Milan, and that both clubs simply need a fresh change. Nothing to do with formations, tactical rigidity, personnel or anything of the like. It's just a crisp breath of air with a quality coach who will fight for his new club. Spalletti because it's a fresh challeneg; a club with a great trophy cabinet whose traditions must be respected and continued. Ancelotti because of the progress and growth Roma has shown, as well as the special bond he shares with both this club and this city. That's all. Sometimes it's not as complicated as it may seem. Sometimes it's just about change.

As far as Saturday goes, just win. Not so hard, is it? And as far as Spalletti goes...something tells me we'll be seeing him patrolling the sidelines to kick off 09-10. In Milan.