Genoa: No Totti, No Party

Share All sharing options for: Genoa: No Totti, No Party 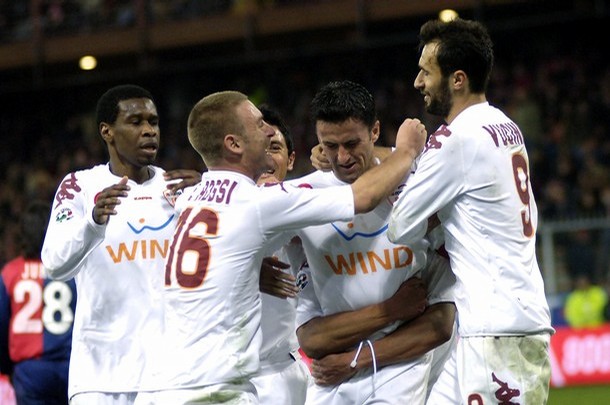 Today's call up list is missing one Francesco Totti. Again. As much as it sucks, I have no doubt in my mind this is with next Wednesday's game at Bordeaux in mind. Considering the circumstances, no gripe.

And to be fair, there was never any chance of Totti playing a major part in tomorrow's game against Genoa - aside from the occasional li mortacci tua from the bench, which is always fine by me - and the best we could hope for, particularly after travel, is a Reggina repeat. So with that it's back to the old sans Totti standbys.

The good news is only one new name has been added to the list of omissions, a minor miracle these days, in the form of Marco Cassetti. (Muscle injury, of course.) But they're still missing a South American trio, including Juan, though as long as GOMR is healthy no complaints here, and will be for some time it looks. Luckily their "replacements" are looking good for their money and with Simone Perrotta back, Baptista would be a luxury as it stands.

As for the walking wounded, Aquilani will be fit after that minor scare following Reggina, though whether he's able to start is another discussion entirely, and it looks like we may just get to see some Sexy Mexy action for the first time since Napoli - cue fangirl swoon. Still far from perfect, and missing Totti once again feels like a donkey kick to the fandom's grapes, but things could be and have been worse.

And I cannot wait to start out game previews with something that doesn't sound like morning rounds at the local ICU.

Relative to their position in the league and financial clout, for my money Genoa had the best mercato in Serie A, and are rivaled by few in Europe (HSV is also looking quite nice). I hope they took Real Zaragoza out for at least a two and a half star dinner before swiping Diego Milito, otherwise they deserve a hefty jail sentence. I've always liked Gasbarroni as well (sweetness over a free kick) and the solid the mix of solid vets (Mesto, Modesto, Thiago Motta, etc) with some young talent (Palladino, Vanden Borre, etc) should serve them well for a very long Serie A run and a few European spots in the future. Oh, and Matteo Fiat. Him too.

Luckily for Roma, they aren't playing their mercato and Genoa has struggled a bit to start the season. They got a win over Milan, but considering freakin' Bologna did the same a week before, fire that one out the window. Two losses in Sicily and they're looking like a less talented Roma right now, still attempting to find their feet. Could be worse, but playing them at home could be more than asked, especially if Milito keeps clicking.

RomaNews is saying Perrotta instead of Aquilani, so feel free to flip flop those two at your peril.

Roma's Injuries v Genoa's Mercato: This is one of those games where the negative impact of Roma's injuries and subsequent disruptions in team bonding might just be lessened. As impressive as Genoa's mercato may have been, they've started at least 6 new faces in each game this season, 7 last week against Palermo, and that makes for a necessary acclimation period. They'll find their feet eventually, but if they are on a similar plane as Roma right now in terms of team gelling, that bodes well for the good guys.

Roma v The 1-0 Lead Letup: If they lose another first half 1-0 lead and resort to stumbling around aimlessly in a depressed haze yet again, I smell epic disaster. The team ego is too fragile right now. Which for me makes The Matteo Brighi Show and Simone Perrotta the keys to this game. Cleaning up anything coming from Genoa's end will be paramount in order to take the pressure off the back and our Brazilian manic depressive in goal.

Daniele De Rossi, Matteo Brighi and/or Simone Perrotta v Genoa's Attack: As much as the ball-winning aspect will help, they need the confidence which it will instill to be able to go forward and attack on sure footing to refine their play in the final third (once again, sans Totti). And that much running is sure to tire out the Genoa midfield, added bonus.

Philippe & Christian v Diego Milito: The big Argentine is one of the more underrated strikers in the world, and his second debut with Genoa has been shown little to think otherwise, scoring two and setting up the third of their three goals since his return. In essence, keeping possession and, when Genoa is on the ball, limiting his ability to receive the ball are up at the top of the list. Hope to hell Mexes is somewhere near 100%. Or at least Diego is so taken by his beauty, he spends the entire game gawking lustfully. Which I suppose brings about an entire new set of issues, but ones we'll let Philou deal with alone. Very alone.

Genoa v Mirko: Ever get a hunch? I've got a hunch. Brace for Mirko.

And I have absolutely no idea what in the world could've led me to think this.....

Heidi Klum looks like the ugly duckling next to that goal. Absolute sex appeal.

The question still remains whether or not Reggina was a sign of things to come or, well, a home game against Reggina - easy as pie. For now, there's absolutely no way to predict the outcome of this game until roughly the 30 minute mark. I don't quite think a draw at this stage is a terrible result, Genoa is going to be quite good, after all, but I certainly hope things have turned around and it's back to the Roma we know and love.

Streaming: Here.
Liveblog: Hope to do most of the midweek games this year, including this one.