Manhandled By Twelve & A Half In Genoa

Share All sharing options for: Manhandled By Twelve & A Half In Genoa 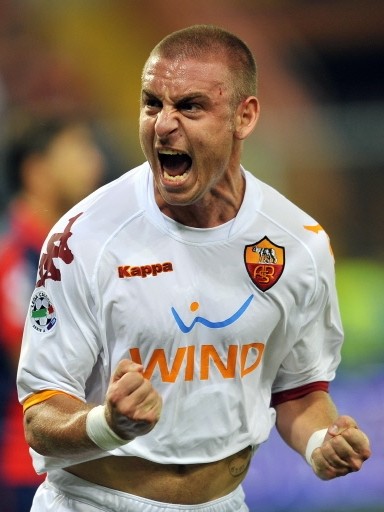 It's become so cliche over the past year, from fans and pundits alike (sans those who bleed nerazzurri), to bemoan the lack of decent refereeing in Serie A, but it's really become too much when highly skilled professional athletes aren't decisive figures anymore. Too often the games are taken out of their hands. To err is human, of course, and they are certainly no more than that, but this has become far too much.

I think Spalletti said it aptly enough after the match, and it's important to consider he's no Ferguson or Wenger; if anything, just the opposite. In fact, ear the end of the game, just after I'd removed my pants out of despondence, I thought it could and would only get better when Spalletti showed up at the presser so freakin' tranquillo, refusing to blame the egregious refereeing errors. Much to my delight, he concurs:

“We are not looking for excuses. However, there are some incredible mistakes going on here. They have to explain it to me, otherwise it is tough for me to understand.”

“This is a very serious and just unbelievable error. Even someone who goes to act as an assistant referee at amateur level wouldn’t make such a simple mistake."

Will it change anything? No, though Spalletti will likely field some unpleasant phone calls from The Powers That Be tomorrow. It's just time for something, technology perhaps, to be implemented. Until then, wait for a giornata when Vince McMahon's theme music kicks off the festivities.

Now for the important question: what is the tonic for that which ails the Giallorossi?

Good fuckin' luck figuring that one out.

Again with the liveblogging, so player ratings are pointless, but a few things noticed:

• It's games like these where you understand the hype which has surrounded Cicinho. The man's a fullback and he's slicing through opposing defenses like an ax through lukewarm butter. Given space he's as talented a 1v1 attacking defender as there is, and he created numerous chances all by his lonesome today.

• Menez made a similar entrance to the one against Reggina: fashionably late. I'd forgotten he was even participating by the 20th minute, but his pace and ball skills wreaked havoc with the Genoa defense, particularly after the half, forcing them into numerous free kicks, as with Reggina. But more uplifting is the chemistry he seems to be forming with Mirko. Totti & Cassano they will never be, but a poor man's version is something I'd never complain about.

• I was okay with Riise when under the impression he was brought in as a backup. Obviously Max is not 100%, so there's little gripe with the lineup this game (anywhere, really), but he needs to be worked into Italian football from a bench spot, not starting every game.

• Spalletti: In no way his fault. None. The second Milito goal seemed something of a fluke, against the run of play, and I thought they reacted relatively well after the first goal, creating chances and looking good to take the league. It was the negated Panucci goal which will get the pub, but Spalletti got it 100% correct when he said Daniele's dismissal "took the wind out of their sails". Without those two instances, I do think a win was in the card. They weren't wonderful, but it looked to be enough.

• Okaka's gallop through the entire Genoa half was absolutely gorgeous. This kid is going to be some player, and if he needs another shot from the start, by all means. At this point, seeing what sticks is far from the worst of methodologies.

• De Rossi's red is still unclear - what's clear is that his challenge deserved no card of any sort - because he had a yellow already in his pocket. I only saw the red, others have said the same, and this will matter when it comes time to deal with his punishment.

Whatever the case, he once again showed why he is so damn integral to this entire organization. I wonder whether losing him is a greater loss than Totti? Guess we'll find out.

• If Panucci doesn't have a contract renewal by the the middle of October I'm going to fly to Rome and beat Rosella with his golden boots until she caves.

• My greatest worry out of all this has little to do with the game, the refereeing or anyone who lined up at the Marassi. Back in Rome there's a feller even more hurt, angry and inspired than any of us, and the true problem is he can do something about this mess. That feller would be none other than Francesco Totti.

Though Panucci wears the band in Il Captano's ansence, there's no doubt Daniele carries Francesco's Roman torch when he's unavailable. With De Rossi looking at an unjust suspension, presumably, Francesco will want to rush back all the more. Even if De Rossi is spared a forced siesta or an appeal even delays matters (quite honestly haven't paid attention to the timeline of appeals), it's obvious DDR is not the problem. Totti will want to come back, force himself even, and he needs to come back at this point, but it could be too soon, which would ruin far more than the near future or even this season.

I almost hope they strap him to one of the marble pillars at his home this weekend, because I can foresee another 75th minute Totti cameo where hack at his legs rules him out of next week's field trip to France. He's too important to risk, yet this just feels to be the inevitable.

Now onto Atlanta, though I don't even know what to hope for anymore. Not this, that's for sure.