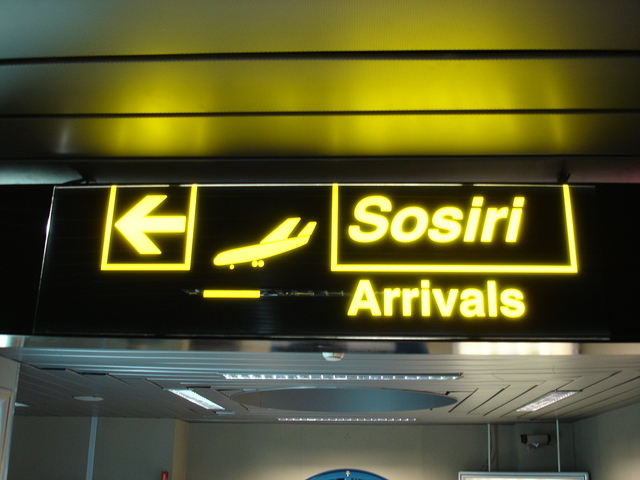 Julio Baptista, Real Madrid (€9m+): Let's get this out of the way quickly....he's got the touch of the statue of David. We know that now, we knew that then. Moving on.

I find it difficult to separate Julio & JAR because they were both bought for similar reasons: physical nature - something Spal alluded to last week. Last year we were so frequently privy to The Oompa Loompa Brigade, which while fun to joke about, doesn't always get it done when up against normal sized people. In fact, when you think about guys coming off the bench, there was no real bruiser who could throw his weight around when the situation called for it. Think of a game like the away fixture against Livorno. They were so bogged down with Giuly at treq and Livorno Clacio & Friends camped in the box. Bring in Beast and, although he's not an Amauri-type aerial presence, he'll create his own space get to more balls than they could last year.

He's a massive talent and a different look, and it's really that simple for me. Fifty goals for Sevilla in two years, and we know Spalletti's system can be used to extract the best out of people. I think in the winter time on a crap pitch against a crap team, he'll start to reap his dividends. The squad has a different dimension, and one they desperately needed.

John Arne Riise, Liverpool (€5m): And more of the same for Riise. Max bombs up and down that wing nicely to whip in crosses, but he's not big, not physical and he doesn't typically make opposing defenses think twice when creeping towards the box. There's a great difference between watching Max hover out by the touch line and Riise sneaking centrally a bit, waiting for a defender to drift and a shooting lane to open. Not that he can't throw in the odd cross, but that left peg is really one of his greatest strengths - if not the single greatest. The other thing is his off the ball runs, toward the box, into open space, wherever, with an Energizer bunny for an engine. Very welcome during the first game and the more comfortable he gets during the game, the more we'll see.

But most of all for me, it's his top flight Champions League experience which should help. After two years of quarterfinal runs, it helps to have someone who knows what it's like to make consistently runs deep into the Champions League. This team has some serious international firepower, but when it comes to club level the quarterfinal runs are about it.

A good defender, not great, he's again another dimension to the side, and that's always welcome considering how pointless it is to have two like-for-like players at the same situation. What was needed - though I'm sure Spalletti would still prefer Zambrotta.

Jeremy Menez (€10.5m+): Was my slobbering during the last week of August not enough?

Artur, Siena (Part of The Great Siena Exchange 2008): I was able to see one whole preseason game and he wasn't really tested, so I haven't the faintest. But the reviews were mostly mixed: partially garbage and partially fantastic. Doni's status is up in the air right now so Artur may get his chance to partake in an actual Serie A game. All I can say is I hope Doni stays healthy all year. Didn't think I'd ever say that.

Grade: Somewhere between a B and D--.

Simone Loria, Siena (Part of The Great Siena Exchange 2008): Loria was brought in for one reason and one reason only: kick ass and take names. While Panucci is a bit more Juan, Loria is much more like Philou as a no-holds barred, raging tackler - and one who can score the odd brilliant goal (there's a comparison to a certain Inter defender waiting to be made here but will refrain from for the sake of taste and good juju). For the price, it was a good, solid move; bringing in a guy who won't make the economic requests of Ferrari (nor require the pitch time) and will give his all to play at this level at this point of his career. I think this could turn out to be a move which reaps dividends not unlike Max Tonetto's, but certainly we hope similar contributions aren't needed.

Valerio Virga: It seemed like he'd be loaned out again on the last day, but nothing came to fruition. Logic says it was the inability to close the deal, but like Adrian Pit last year, maybe TGIP wanted an extra body around in case things get dire. With Espo and Alvarez out, the true wing options are limited and a lot of lineups are going to feature guys either in a secondary position or learning a new one. For the wings, aside from Vucinic, Menez and Taddei, it looks something like this: Perrotta (CM), Okaka (ST), Tonetto (LB), Riise (LB), Cassetti (RB) and perhaps even the Beast (hope not). Leaving a true wide player in the stable might not be the worst idea, provided he continues to develop, but playing consistently probably would've been best.

Though it never hurts to add another Roman.

Grade: C. If he gets 5 games, I'll be shocked. Screaming January loan move.

L'Aeroplanino: There will be a whole post devoted to him at some point soon.

Okaka: The exception to the rule. We'll say it before, we'll say it again: anything this year is a bonus. But if the first two weeks are any indication, he just may provide more than we'd hoped for at a position we didn't expect. Just a special talent and I can think of much worse ideas than giving him a run until at least January, whatever the position may be. At worst he gains the knowledge he needs from training to mold his game when he goes back out on loan. Best case? The future is now.

Pietro Pipolo: Proof positive they read this page - they left me an Italian keeper.