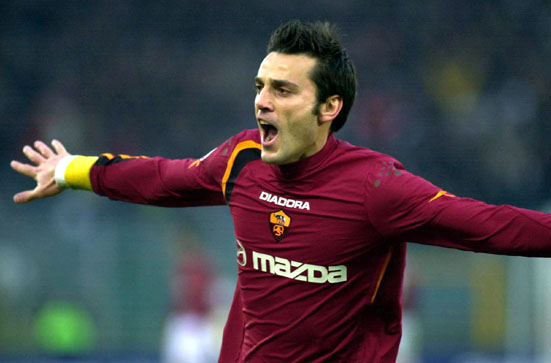 I read that Montella may start against Palermo and immediately lost an hour of my life to YouTube highlights. Be still me fuckin' heart...

I have no idea what to say because this is all subject to change 5 minutes from now, much less before the game, but here goes anyway:

Taking a stab at Saturday's lineup...

But for the sheer purpose of nostalgia, hoping we see Vincenzo.

One week. That's all they gave us. One week. Devoid of transfer rumors, wondering only about the squad at hand we were all (most....some....alright, a couple of us) more than happy to allow for the season to proceed as the Giallorossi, not Giallorossi Plus Guys Who May Or May Not Be Here Come January, until November-ish. That's fair.

But nope. We've got mercato rumors, and luckily in the form of a guy I've been a big fan of for a long, long time: Mr. Lukas Podolski. Now, so that you read the rest of this post with a catchy jingle in your head, enjoy...

You're welcome. Now, onto Podolski.

Why he's in Bavaria right now I haven't the faintest. Could be the brews, could be more to this "Schweinski" thing than we know. We'll just have to accept that he was sweet talked like a sucker by Jurgen Klinsmann and then dumped like a overflowing sack of shit (we'll call it Tumu) the minute a sexier lady came along. So now he's back on the bench, hating every minute of it and we can fire up the Free Podolski! charitable organization once again.

And something says he's open to the help:

"I wouldn't have [signed] had I known that things were going to turn out like this," he roared.

"I would be a bad footballer if I contented myself with sitting on the bench. This is too much! I'm not making any progress here.”

So Podolski wants out. Where does that put Roma, who have yet again been linked? He's going to have a fairly sizable pricetag considering he just cannot. stop. scoring. for. Germany. I mean, it's damn near disgusting. Had another brace over the weekend, making it 30 in 56. Yeah, it was against Lichtenstein, but given his rate what's to say it would've been any different against Spain? Or Argentina? He's obviously a world class forward in the wrong place at the wrong time, the question just becomes whether or not Roma is willing to throw that scratch at him. But more so, I think it depends on Okaka's development come November/December. If he's slapping us in the face with dazzling performances every week, I think Spal would be more than happy to have Podolski resurrect his club career elsewhere.

Both Julio & Juan will be arriving late from the international break on Friday, so they'll be unavailable for the Palermo game down south.

I don't buy this tardiness shit for one minute. Robinho was going to be late. Know what he did? He bought a helicopter. No excuses.

King Alberto is reportedly close to his extension which will see him make Mexes-money. Fair enough. Market value is that which others are willing to pay you.

Shouldn't really be a story. He was never leaving.