Share All sharing options for: The Seven Minute Collapse 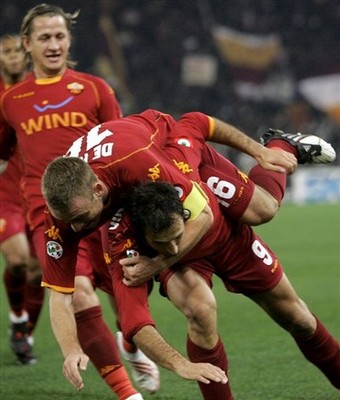 It was always the most likely result going in (didn't you see the preview?), but that doesn't make it any less frustrating, any less disappointing. The result wasn't merely there for the taking, it was being offered on a silver platter by a team playing right into Roman hands. A team given incredible amounts of possession but not in the areas the needed most, their exquisitely talented front three being afforded little space with which to work. Dropping a fullback in on the left, begging an aged superstar to bend in cross after cross in as their main avenue of offense. Compacting the middle of the key, not allowing the Brazilian attacking trio to make incisive runs. Though Milan wasn't very good, it was a well executed gameplan. Except for seven minutes. And seven minutes meant a dropped two points.

One can't explain the happenings on the first goal with a library full of textbooks, an abacus, a team of Nobel Prize-winning minds and at least six rubs of Spalletti's magic dome. I could see it if one defender managed to fall asleep and feel that by playing three yards behind the last defender he was still, in fact, keeping the line. Maybe two. All three? Including Juan & DDR? Unthinkable. That goal was a gift and perhaps their worst mental lapse of the season, plain and simple.

I can't hang that second goal on a thoroughly toasted Philippe Mexes. He's never going to look good going up against Pato in a foot race over six inches, much less twenty yards. I can, however, hang it on myself.

With about 4 or 5 minutes left in the first half I said something along the lines of "Cassetti is having the best defensive game I've seen him play", which he was - or at least something close to it. For about 40 minutes there he was exceptionally solid, much like the rest of the back line. Not that Milan was concocting the most difficult of tests, but Marco isn't exactly and will never be a fullback of Maldini's caliber defensively. To hold an attacking trio featuring the likes of Kaka (mostly in the first half), Pato & Dinho the way he did was commendable.

So after meandering into the locker room and checking the Roma Offside comments section - you know he did - Marco started to feel his oats a bit and switched from a safer, more cautious defensive style to a more adventurous, risky one. Instead of playing it safe, Marco sprang for an interception which wasn't there and allowed Sir Yellow Boots to coast right past him, leaving Philou hung out to dry like the morning laundry. Pato finished spectacularly, of course, and you've got yourself a draw. My most sincere apologies. Next time I'll tell him he's shite and that his daddy never loved him. That should do it.

So make that two gifts. Credit due to Pato on both goals - and for the game, as he was miles and miles beyond their second best player, whomever that happened to be - but he shouldn't have had the chance for either. It was a dropped two points more than an earned one for Milan; it gets no more frustrating.

As the Roma hero goes, I think it's safe to say we're about 6 months from a €50m bid from Galliani for Mirko, simply so Carletto's hands won't have to face their greatest nemesis any longer. Last three games v Milan:

Big game player, Milan killer and a world class striker. At times he'll pick at the very fiber of your soul, but he's going to bag the big ones. A €20m very, very well spent.

Cassetti: First goal I'm not sure you can blame him too much for - that was, after all, Kaka. The second was a very....Cicinho moment. Unfortunately Cicinho typically has the pace to race back and at least make the attacker think twice about the pounding feet behind him (though maybe not Pato). A crippling, crippling error blights what was, up until that point, a very good game. After that...ugh. 6.5

Juan: World class game from Crockett (or is it Tubbs? would you believe I don't know?) and I'd say he put on a clinic for anticipation, but lord knows how many times he'd gone up against Kaka, Dinho and Pato in Selecao camps. Plainly he cheated, but we'll take it. Now if only he hadn't fallen asleep during that first goal. 7.5

Riise: One of his better performances this year. Very good at times, great during others. Charged down the flank so many times he aspired to fumes towards the end of the game. So desperately want him to park one of those lasers netside to do his confidence a world of good. 7

Taddei: Somewhere in the middle. Not good, but not quite bad either. Becoming more and more the par for Rodrigo. 6.5

DDR: Instincts are second to none. Best midfielder in Serie A, perhaps the best DM in the world. 7.5

* - An extra 0.5 for that clinical American football tackle on Mirko during the first goal celebration (top pic). Kid's a two sport star.

Brighi: Not really up to his typical stellar levels, but he is merely human. 6.5

Perrotta: A little more conservative than hoped in the treq position, but then again that was the plan for the day. Many times I kept an eye on him waiting for him to make one of his patented brilliant off the ball runs into the box only for him to pull up the reigns and almost drift back (particularly in the second half). With the counter capabilities of Kaka and Pato, hard to really blame him. Looking forward to the next pair of slow arsed strikers. 7

Baptista: Meh. There were a couple times where both he and Mirko made the wrong decision while they were both attacking. However, showed some great ball work at times. Has the quality, will get there. 6.5

Mirko: The second goal was a display of supreme quality. Superstar. 8

Pizarro & Aquilani: Neither have played meaningful minutes in what seems like eons and yet both came in to make contributions and stoke the fire a bit. I think we just some late Christmas gifts and the only thing this team needs out of January.

And now it's Sampdoria, in what I believe to be an absolute must win game. Always a nail biter when the Giallorossi are involved.