No Totti? No Mirko? No Problem.

Share All sharing options for: No Totti? No Mirko? No Problem. 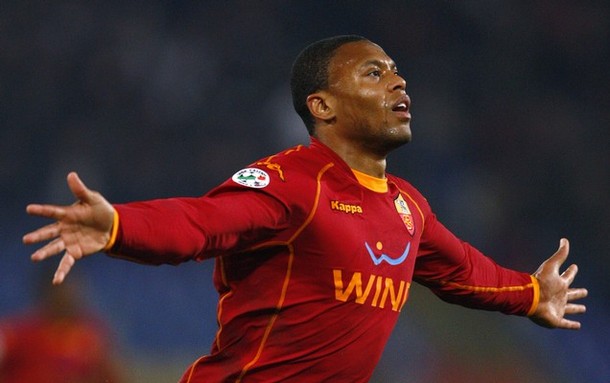 The classic match of a poor team playing poorly and a good team playing goodly. A commanding performance in which the result was never in doubt and the entire team will reap massive benefits besides the deserved three points. They can all feel free to grope their oats after this one, as every single player who stepped onto the pitch was good, if not great. Something we've been waiting on for an awful long time (as shit as Sampdoria were aside).

Hero for the day was the man they so desperately needed it to be. With Monty going down pregame - osteoperosis or something - and Jeremy Menez still nursing his wounds, Julio Baptista was the only quasi striker available to The Grand Imperial Poobah. In fact, along with the hobbled Frenchman, the only other "attacker" on the pine was Pinocchio Virga, who has yet to, and probably never will, see senior minutes this year.

As he did against Bordeaux The Beast stepped up and lived up to his nickname time and time again. Had a brace, wouldn't have been flattered by four or five. Actually, let's go ahead and count the second twice after he baked half the Samp defense like a casserole. So there's the hat trick he deserved.

The rest of the squad weren't quite up to his stellar standard but they weren't far behind, either. There were some imperfect moments and they weren't exactly put to the stiffest test, but it was a great performance across the board. Nary an average performance, even.

But what's more is we finally got our mercato gift. When Alberto Aquilani entered the pitch for Rodrigo Taddei is was like back to the future all over again. The difference in technique is incomparable, and when partnering up with David it was like the fluid, free-flowing attack of the 4-2-3-1 again. It was Roman football. Sure, Sampdoria were frustrated and tired, but we've seen this Roma do that to teams time and time again. They were equally as bad as they were made to look bad.

And with David & Alberto back, the grind it out mentality of recent times may be replaced with that champagne football we came to expect of Spalletti's Roma.

Pic of the Game

How long have some tifosi been waiting for this? 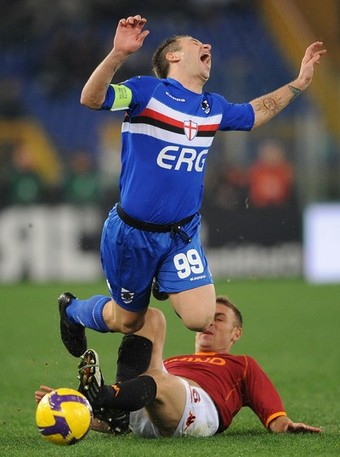 Though how DDR managed to avoid a booking is beyond me.

Artur: Had to make few decent saves, made them easily. 7

Cicinho: One of the best games he's had whipping in crosses in some time. Many were simply phenomenal. 7.5

Juan & GOMR: They really had little to do which required anything above walk through and they did it well. 7

Taddei: Very good game from Rodrigo. Unfortunately for him, I think the return of David & Alberto is going to drastically reduce his playing time. Not the worst development considering recent times, but he's been a valued, underappreciated performer for a long, long time. 7

DDR: He put in Perrotta miles on his bike today. I was honestly hoping he'd throw himself under the bus for a yellow as the game wore on to get his impending suspension out of the way (next yellow he misses a game), and Torino is certainly the ideal opponent coming up. Unfortunately the bastard had to play an (almost - certainly not if you ask Talentino) clean game. 7.5

Perrotta: Yet another in the Perrotta miles category. Fitting, of course, seeing as how he's...you know...Perrotta and all.

But really, the Brighi, DDR & Simone trio ran their arses off today. Well done by all three. 7.5

Pizarro: I love David Pizarro. Love him. Provided he's not sitting next to DDR in a two man defensive midfield, that's all. 7.5

Julio: Everyone knows he'll never have Francesco's passing touch, but I have to say I didn't think his dribbling skills were quite this good. He was pulling off Menez type moves - dribbling around and through defenders, pushing the ball ahead and blowing by people - really just did not expect to see that from him. And as well as the team performed collectively today, the three points are 100% down to him. He won the free kick he scored and allowed the rest of the squad to break out the popcorn and kick back for the second. Just a phenomenal individual performance. 8

* - Helluva day for the mercato, huh? You'll all come around some day.

Aquilani: Kid is just supremely, supremely talented. A bit too quick with the trigger finger sometimes, but I don't think there's any doubt he's really pressing, trying to prove himself once again. Multiple injuries will do that to a player, especially at his age. Forget Podolski, Nilmar, Osvaldo, etc, there is no player on the market - or off, for that matter - who can have quite the impact of a healthy, motivated and hungry Alberto Aquilani. 7.5

Cassetti: That was a gimme if I've ever seen one. Must've been a dream after facing Ka-Pa-Ro. N/A

Menez: I imagine he was seething on the bench when Julio was making him look like he's got two left feet and thus let out his frustrations by basting the Samp defense multiple times in about 90 seconds. 7

Spalletti: There were three goddamn players on the pine nursing their wounds. All three were subbed in. What is he trying to do to us? Is he playing fast and loose with the gods? Has he not learned his lesson yet? Gesu. -12.

Next: Torino, who suck something fierce, in Piedmont on Sunday. Would be a gimme for most teams, but this is Roma and, if the final 15 minutes were any indication, the Roma we came to know and love over the last few years. You know, the one which took decades off the end of our lives against small teams. This can only go well.