Torino: Not Another Trap Game.

Share All sharing options for: Torino: Not Another Trap Game. 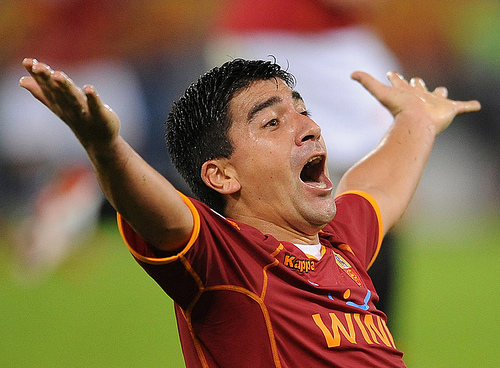 Here's the thing: Torino are like their namesake, il Toro. Except the complete opposite. Things are so dire on the maroon side of Torino Alessandro Rosina has even found himself on the wrong side of the touchline on a number of occasions, going from the next Zola to the next guy off the bench for a future Serie B champion.

But like any good relegation contender, they're much better at home than away and could actually pose a problem. Nine home games and they've actually managed a result in 5, going 4-1-4 in those fixtures. The four wins came against Napoli, Atalanta, Lecce and Palermo, with the draw against Milan, so it's not like they're just pounding fellow relegation contenders at home (Lecce aside) and certainly far from the gimme for which everyone is hoping.

And, as we know, this is AS Roma v a small team. A small team which managed to stifle them 0-0 in Torino last year (that and the Livorno away fixture being enough to sprout grays on an infant) before pounding the nonexistent reserves team (including reserves captain Mancini) 3-1 in the Coppa just three days later*, requiring some heroics from His Tottiness back in Rome to continue the defense. Yeah, so Roma being Roma. Should be fun.

Now to the good news: AS Roma will go into the fixture with a medic patrolling the sidelines other than Dr. Bozo Brozzi who was fired in a Shock! development. Clearly he hadn't realized that Kappa printing Prade jerseys as a precaution put his job on the line.

Now don't pop the champers just yet, as they've merely promoted from within. A big step in the right direction, but not quite there, is it? I'd been hoping for a full house cleaning, but will certainly take this. Will it make a difference? Can only hope so. Not off to quite the banner start, though, as Mirko has been left in Rome along with all the usual suspects (Doni, Totti, Okaka, Montella, Batigol, Delvecchio, Pruzzo and every other decent goddamn striker to have played for Roma in the last 30 years).

So...yeah, more of the same. Roma traveling to a shitty team with a decent home record and bringing half the Primavera in order to pad the bench. Wonderful.

* - Speaking of that Coppa loss, along with signing yet another Romanian duo for the youth setup (I've been doing my research but have found a slight bit less than nothing on them - though Adrian Stoian, attacker I believe, already has an ESPN page), Roma have reportedly called back Adrian Pit (Pronounced 'Piz') from loan with Pisa. I'm guessing this isn't a good thing. I'm also wondering why the hell Romania's U-19 national team has decided to install a satellite program at Trigoria. How many Romanian youth products are in the Primavera (or lower) now? Six? Seven? Are they trying to build a full squad? Or have they decided that, Pit's stint being an overwhelming success, Romanians make the best training cones? I'm going with the last one. Think it's called Chivubiggameitis, or something.

** - Just found the link: it's Adrian Stoian and Bogdan Gravila, a couple of Romanian midfielder/attacker types. And Pit had an ankle operation which brought him back Trigoria-side, so the training cone theory still holds. His projected impact for the future - that being jack shit - also still holds.

Mirko: Brozzi held a press conference and his body immediately shut down. Should be back and running soon enough.

The bench will be exceptionally thin with the defense being the only area featuring even the slightest hint of depth (Cassetti, Panucci, Loria). Unless it's a blowout, expect only the usual suspects - Cassetti, GOMR & Alberto - to unglue their asses from the pine.