Share All sharing options for: Coppa: The New Merda 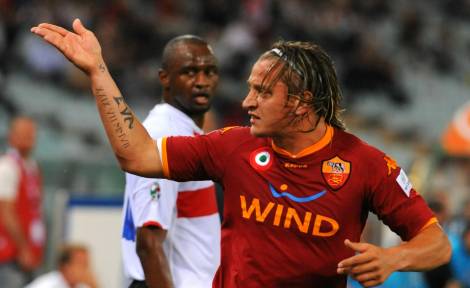 Lazio? The Original Merda got off to a blinding start to the campaign - they briefly dated the supermodel - and are now back to aspiring to mediocrity - they realized she's blind and has the worst case of herpes in the northern hemisphere and are now back to feeling out three hundred pounders - right where they should be. Inter? Well they're the dumb-as-a-buck-of-rocks three hundred pounder with the rich daddy who paid off the admissions board to get his mindless little heifer into the elite school, making them all the worse.

La lazie may be The Eternal Rival, but at the moment Inter are more threatening. After all, they can buy more. Like titles. And obnoxious Portuguese managers that are enough to turn you off the printed word completely. And pouty unproductive Prozac-poppin' Brazilians (oh yeah....grazie). And your sister (just wait). They are the post-Calciopoli Juve. They are Italy's new representation of evil; thus we hate them. Hate them like the new Lazio, new Juventus, new France, new guy-who-stole-your-girlfriend-but-is-slightly-better-looking-and-sometimes-you-just-have-to-say-ah-shit-I-would-too.

And sometimes a little hate is good.

Now for the good news: Francesco will be watching from home.

Think about that for a second: how bad must things have been this year if we're joyously exuberant the pitch won't be graced by His Tottiness? Unfathomamable (yes, that's a word).

Then there's the matter of Napoli over the weekend, which we can only hope also involves Totti and his (undoubtedly luxurious) sofa, the tried and true "six pointer". An incredibly important game against a team stellar within its home dollhouse (unless that team happens to feature flying arses), kicking off a run through calcio's midtable before culminating in an Arsenal-Inter twin feature of self-loathers. A run which may turn out to be the most important of the campaign, going a long way in deciding the fate of not one but two seasons.

Where does that leave Spal making out tomorrow's lineup card? Something says an awful lot like like the rest of the year: healthy bodies are a premium. There lies a very fine line between risking further injury and winning back some match fitness, so it will be neither the best lineup TGIP can field nor a true "Coppa" lineup (that's polite speak for "B squad"). Quasi-fit guys like Mirko and...now sit down for this one...Alberto (still finding his complete game legs) will likely find themselves reading a nice steamy romance novel until the 60 minute mark or so, when they can begin waiting for the call should it be required.

While I'm sure Spalletti would love nothing more than another victory at the San Siro, the difficult weekend fixture, impending league run and Champions League home-away are far more important with this much ground to be made up. And really, one doesn't have to be a glass half-empty person to see dropping out of the Coppa as simply two fewer chances for The Bubble Boys to go down.

Anyone else notice a trip to the black & blue side of the Giuseppe Meazza hits the books and all of a sudden Italians start dropping like flies? Brozzi wuzz robbed(z).

* - Mancini has a second degree sprain of his ability to care, called up anyway.

I'm sensing yet another anti-Rafa moment from TGIP. Think Menez is the key. Actually, think Menez v Chivu is the key - should Crystal play CB and Yeremy get the chance, that is. Or is a Coppa quarter not big enough for CC's knees to go all wobbly?

MOTM: Whomever is reffing this garbage.