Napoli: Runnin' Away With It.

Share All sharing options for: Napoli: Runnin' Away With It. 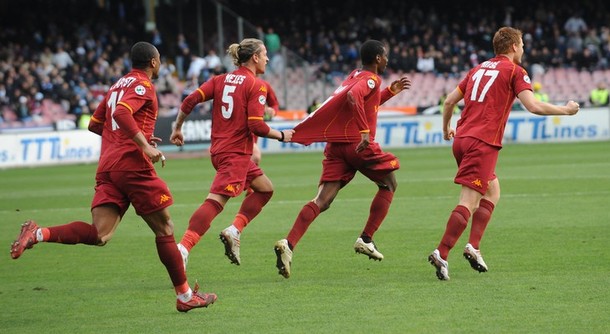 What a fantastic day to be Roman. The Giallorossi travel to the formerly impenetrable grounds of the San Paolo and not just win, but do so by bending over the other baby blues; while back at home Lazyo were absolutely crushed by a team that will probably petition Lega Calcio to play its future home games at the Stadio Olimpico at some point over the summer. A massive three point surge ahead and now, in week 20, they're just three points adrift of fourth. Fourth by the end of the year? How about fourth by the end of January? Huge boost all around: in the table, for the team's confidence and for Francesco's legs, which weren't required and got another weekend off. Amen.

Yes, first goal was marginally offside (and I hope Napoli get some karmic retribution in the coming weeks - giornata 33, perhaps) but Napoli have no one to hang this on but themselves. Undeserved one-nils happen; what shouldn't happen is a defender, instead of giving Roma a throw in, scorching the ball over his own keeper from 45 yards out to gift a corner and thus a scoring chance (in the highlights). That was, without a doubt, one of the dumbest things I've seen in my time watching calcio. In fact it was so dumb it should've counted as -2. So there, all's well again.

(And really, there's no debate on the Zalayeta "goal". Stevie Wonder could've called that one from a couch in Greenland.)

Other than those two set-pieces, this was a fixture where the gameplan worked to perfection. Don't let the possession fool you, that was by design. They came to be compact, to defend well as a unit and to efficiently hit out on the counter and finish the chances (i.e. set-pieces) that came. This was simple execution by a very good team. Napoli is good, they will be good, but Reja's Azzurri are no match for Spalletti's Roma - tactically or technically. They were out-thought - though I'm sure they saw it coming - and then outplayed.

As for the MOTM, it's quite simple: Francesco. His mere presence in the stadium, on the bench, there waiting for the call, put such shivers into the legs of Napoli they collapsed at the formerly indestructible San Paolo. The shine off his golden boots lifted TGIP's men to a degree of such belief his presence on the pitch was completely unnecessary. He is simply a player who makes all around him, whether playing or not, that much better. This team, without a shadow of a doubt, is one that revolves around Him and Him alone.

Tied for fifth, three points from fourth, seven from third. As Luciano said, fourth is the "minimum objective".

As ever with Roma....it ain't easy even when it's easy. Senor Panucci decided that, since his services in the starting XI would not be required today, he'd rather sit in the stands and pout than on the bench, essentially quitting Roma in the process. Obviously he thought this because:

i. He's better than Juan and/or Philou.
ii. Ezequiel Lavezzi wouldn't have baked him like a Christmas ham.

Neither of which are true, of course.

What this has become is the fourth "situation" between GOMR and either Spalletti or a member of the squad within the last 15-18 months. That being: The Dirty Laundry Incident with Spalletti; failing to realize Alberto's joke was fucking hilarious and pounding him into the Trigoria grass; Doni-gate; and now this little principessa moment.

Christian has immense pride which can sometimes result in difficult, or non-existent, relationships (see: Lippi), but you'd think a 35 year old sometimes captain would be able to set aside his personal desires for the good of the team. He was, without a doubt, the worst matchup possible at either fullback spot today. Cassetti might've been somewhat close (still has more pace), but Riise at least kept Lavezzi in check, which GOMR would've struggled with mightily. And Juan*/Mexes he ain't.

* - Also wondering if Juan's recent reup has something to do with this. GOMR's contract is up in June, Juan's was up in 2011 and yet he got the first extension (til 2014) along with a sizable payraise, while Panucci has, admittedly, done a whole lot of bandaging to the back line while Tubbs has laid supine on the Trigoria medic's table the last 18 months. Of course this also seems in line with the theory that Panucci doesn't understand his age so maybe he doesn't want to register that a world class defender not yet 30 is going to get a whole lot more attention than one on the cusp of mid-afternoon naps and the inability to eat anything spicy after 4 pm.

So Panucci threw his fit, was banished to the stands, and now would probably be the time to get ready for the post-Panucci era in Rome. A good and loyal performer for years, but too many distractions and disruptions within the confines of the locker room. At the very least he should be given a reprieve from captaining the team - this is, without a doubt, the polar opposite of a captain's behavior - and chances are these will be (at least should be) his final months in Rome - depending on what happens in the coming day. Let him go back to Genoa (if Milan doesn't get there first) and spend the next however many years as a starter, not realizing his age until a 42 year old Bobo Vieri blows by him for a 1v1 with the keeper.

At best he's a very good performer in Serie A for however many years he lasts, but at worst he's a player who fails to realize he ain't 25 anymore and his playing time will reflect accordingly. Unfortunately, the latter certainly looks the case...

“I have made my decision, I'm leaving Roma, as Spalletti does not respect me."

Tis simply time. We'll see how this plays out after everybody has a chance to sleep on it, but it's probably best for all parties.

Pic of the Day: Pogo Sticks

Soak it up, because they won't look this good on set pieces for awhile. 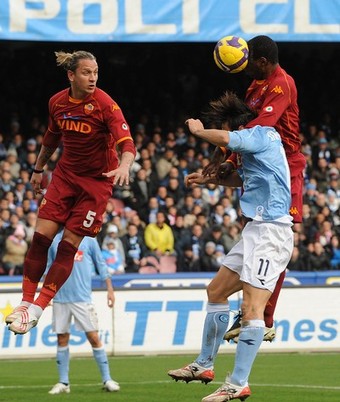 Doni: A good game in his return, but he needs to take the defense and midfield out for a nice dinner this week - maybe twice. 7

Cassetti: I think Cassetti's game so capably sums up this entire fixture: was good but wasn't perfect and when he needed help it was there. And that's the thing, they played so well as a team when one player had an off moment - no one's perfect - someone stepped in to shoulder his load. (For Marco it was more often than not Philou - specifically recall a world class tackle early in the second half to prevent a potential mess.) Really just not sure how to view Cassetti's performance when he was so clearly just one of XI. 7

Crockett & Tubbs: A big old "shape the fuck up, Christian, because we can score too" from the backline duo. Brilliant & brillianter. 8

Riise: Admit it, you had Lavezzi down for at least two going up against JAR. Don't lie. 7.5

Brighi: Transcended beyond MOTM and is now MOTW - Man of the Week. An astounding 180 minutes between this and the Inter match. If he isn't called up for the Azzurri it'll be nothing short of criminal. 8

Pizarro/Aquilani: I'm combining this as a position and giving them both my real MOTM. All three assists from the treq position, but both played outstanding those dimes aside.

And though they both played exceptionally well, they couldn't have played different games. Pizarro is pretty on the ball, and was, but Alberto is so subtly elegant. Or is it elegantly subtle? Or maybe both? The ball to Mirko on the assist was sublime and the way he toasted those defenders down the left is the most uplifting sign we've seen from him in a long, long time (he's clearly feeling confident in the old legs). And what's more, he was hurt in the match - inevitable, of course - but then unhurt himself within the same half. Unfathomable.

I dare say, it's been a wonderful January mercato for Roma, has it not? 8

Baptinogol: He can miss all the sitters he wants when it's 3-0, but he damn well better make up for it with Samp & Torino type heroics next time out. 6.5

Mirko: Vucigol looked far from fit in the first half, maybe even a bit hobbled at times, and had Julio finished his sitter while Piza stayed unhurt, I thought he may come off during the break (as much for his sake as it would be to insert Menez's pace and subsequent countering abilities in a 3-0 game away). Great strikers and all that. 7.5

Menez: Kid's got some skills, eh? Still needs to eat a sandwich. 7

Perrotta: First of all, love the giant hat. Suits him well. Second of all...was so amped when he came in there were a couple moments where I thought he was Menez. Compliments get no higher for the over thirty crowd. 7.5

And with that we conclude another very good game from a very, very good team.