Another Day in the Life of Roma

Share All sharing options for: Another Day in the Life of Roma 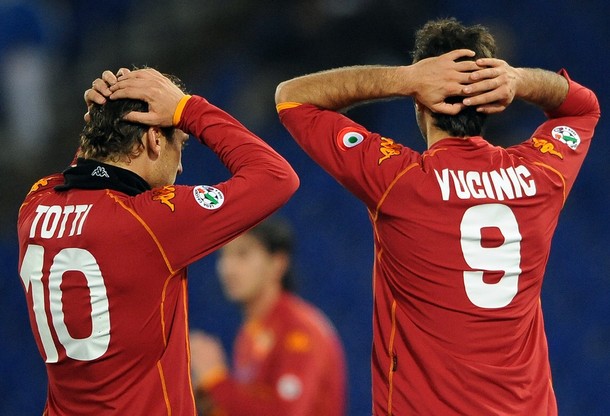 Shock(!) development within the last hour coming out of Rome. Tapes have surfaced - this is Italy, after all - of a pregame conversation between Luciano Spalletti and Davide Ballardini which may lead to the reasoning behind Roma's 2-1 win.

DB: "Don't think you're pawning it off on me. No way I'm piggybacking that thing all the way back to Sicily. Do you know how much they charge for luggage these days? Criminal."

LS: "Fine, leave it at the half. But there's no way in Christian Panucci's living room I'm hauling it back to Trigoria. I've got enough to deal with, Panucci's baggage and all."

LS: "Fine, I bet my team can't win this game better than your team can't."

That would explain it, yeah?

At least they played as a team. Unfortunately playing as a team in this instance meant they all played like dog poo. Except for the attack - Totti's excused (he did, after all, assist on both goals) and Mirko had a fairly good game, epic sitter miss aside. And Cicinho, but only going forward. Other than that, though, they couldn't have connected a pass in a telephone booth. Fortunately Palermo couldn't beat a full strength Roma on its worst day, but they'll need to significantly up their performance for Reggina on the weekend.

Alone in 5th, one point from fourth. One solitary point.

See, even they didn't want to watch. 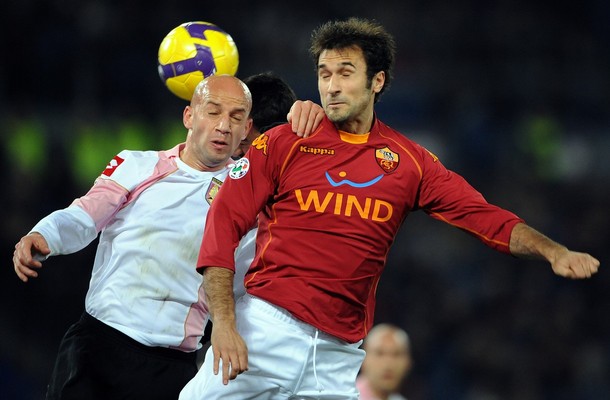 So they got the win on the first day back with almost an entire full squad back....and this happens. Typical Roma.

Early reports look really bad for Marco with a torn thigh muscle looking possible - after his whole three minutes on the pitch - and a potential sideline spell of three months (basically what we just enjoyed from Max, who does still in fact play for Roma). Disastrous, made no less so by the fact that Christian Panucci still wants out and the suits are still willing to accommodate the grumpster. Usher in pandemonium and a rushed attempt to formulate a post-Panucci/sans-Cassetti market plan with mere days left on the clock. I think the feelings on the summer mercato are starting to turn - Gloria aside - but this has never been a management with any understanding of the word stat. It's been said before and can be said before: Rosella judges time by a sundial in the basement. Obviously this can only go well.

Something tells me, regardless of Cassetti's injury, Spalletti & Panucci will hash out a real man talk in the morning with lots of hand gestures, locked emotions and grunting. Fact is the hierarchy don't just want to find a capable replacement of his caliber, they may need Pricipessa Panucci and only Principessa Panucci. Too versatile, too many years in the system. They could pick up a sprightly 23 year old doe eyed phenom in his stead but that doesn't mean he'll learn Spalletti football at any point within the next four months. We saw it with Loria - his performances did pick up, albeit oh-so-slightly, with time - and we even saw it with Juan during his first months in giallorosso (though being so smooth, so calm veiled many a growing pain). It's just not going to be pretty to start off with.

And let's be frank: Cicinho's enjoying a nice run of form, but at some point he's going to get lit up like a menorah - night after night after night. At that time, whenever it may be, they could desperately use a guy like Panucci who can bring some stability to the side (provided he doesn't KO a teammate midgame, of course). And it's not as though he's decrepit - he's still a very good player - it's just he's no longer a player who can take on the likes of Lavezzi, Pato and Kaka without being baked to a crispy crip. Still very usable, just not a week-in, week-out guy and one who matchups can be very unfavorable toward.

But they'll still almost definitely need a defender in some way, shape or form. If Cassetti is down for a substantial period I think they'll have no choice but to make nice with GOMR until the end of the year and buy, more likely than not, a true 3rd CB - because no one wants to see what May would look like with a roster four deep at right back. Just not sure how they can acclimate two defenders while losing someone with such versatility. Given what the city and team has meant to him, and despite his feelings toward Spalletti, I think GOMR would be willing to make that sacrifice. If only for his farewell tour....from the pine.

If Cassetti lucks out, chances are they sell Panucci for a Supersized Big Mac value meal and the change from the sofa cushions (most of the time that's an exaggeration, this time it's not). And if they do, the likely candidates are....

Roberto Ayala: 35 year old pygmy currently playing with Zaragoza in the Spanish Segunda. A class player in his day, an experienced veteran and one who would come exceptionally cheap, old legs fresh off second division action scare me. Don't know why. Also, how the hell Zaragoza got relegated last year is a massive mystery to me. Well, not really. Not when you concede 60+ goals.

I haven't watched enough of him in the last two years to make judgment, and it's not as though they need a world class CB for the pine, but something about this frightens me a bit.

However, tuttomercato has made it a point to mention his agent is one in the same with Alberto Aquilani, and thus it could be easier for Roma to steal him out from under the waiting arms of other clubs. And you wonder where rumors come from....

Cesare Natali: Rumored to be swapped for Simone Loria, now rumored as a potential Panucci replacement. A bit too much like Loria for my tastes and Torino may be a hard sell.

Leandro Cufre: I'm kinda sorta making this one up, but he's been ruled ineligible to play for Monaco as he has a fake passport or some such (Argie? Fake passport? No fuckin' way!). Reportedly headed to Greece, but would leap at the chance to return to the Eternal City. Expect to hear his name come up in the next few days, if only as a last resort.

Right now those are the names. Expect the morning's papers to look like editors and journos started vomiting team rosters, regardless of Cassetti's prognosis. This could get very, very ugly - and by that I just mean the rumors. Lord help us the first time Juan, Mexes or Cicinho go down/get suspended/have a bad hair day.

Ah, the life of a Roma fan. Never, ever a dull day.