Share All sharing options for: Reggina: New Faces & No Faces. 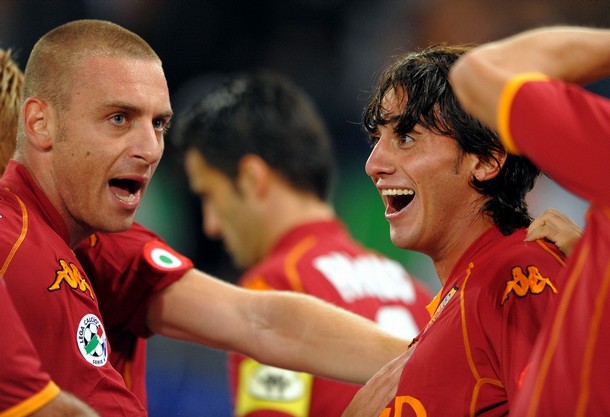 Wednesday. Mother#$%&ing Wednesday that thing was empty (minus Principessa Panucci & Vincenzo). This team is cursed. There's really no other explanation.

However, the fact that...

a. The game is away.
b. Reggina is the most sucktastic team in Serie A.

....probably played some role in this. If this were Genoa at home I suspect the roster would look a slight bit different.

And this is how bad it is:

i. a guy they bought this morning - this fricken' AM and will meet the team for the first time at the team hotel - is being forced into the squad because they have no fullback coverage....and he's a CB by trade.

ii. Two players - Stefano Okaka Chuka (Triestina) and Leandro Greco (Pisa - aka Roma Lite Lite) - who will almost surely be going out on loan Sunday evening have been called into the squad because of a numbers problem. Without those two, Spalletti has a bench five deep. So the bench will feature Greco, Virga, Okaka, Filipe (who I have yet to see outside of his official team picture) and the new guy who will be briefed on team tactics and intricacies during bedcheck Saturday night. Epic.

Speaking of the guy they bought this AM....

Big, physical 26 year old Malian int'l (45 caps) who can play right back also but with a penchant for stupid mistakes - but also seemingly raw, and someone Spalletti might be able to mold into a fairly good centerback.

Right now, that's that. It'll take til Monday to determine how the team shakes out and where he fits in. If he's replacing Loria - Spal basically described him as a younger Simone this morning - then this is probably a good move. If the backup centerbacks are Souley & Simone.....

I'll be less than thrilled, let's just say that.

However, he can pose for a mean picture. 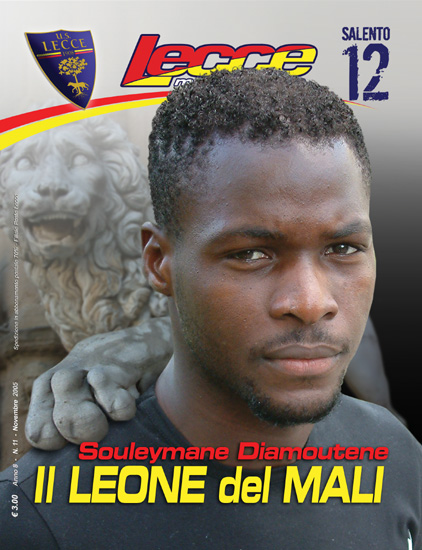 Reggina are still garbage, Roma are not. Not quite sure it'll be a cakewalk, but the Calabrians are on the fast track to Serie B and they'll need a monumental upset to take points off the new-look Spalletti machine - injuries, weather (below) and all.

Francesco: Back, not the knee (giant sigh of relief....now).
Vincenzo: Shoulder
Julio: Shoulder muscle
Cassetti: Amputated leg (two months minimum - the things they can do with medicine these days, eh?)
Alberto: Stubbed toe, or something.
Riise: Knee contusion
Perrotta: Ankle

Nothing serious - Cassetti aside - but still worrying that the injury list is back to looking like roll call.

Unsure if Aquilani or Menez will get the start, but it's going to be one or the other and Alberto is a bit banged up (no surprise) and he also offers more options off the bench*. Now if you would please sit down and grab a bag in which to vomit...the bench:

That's three - three! - outfield players who have seen minutes for Roma this season. Okaka once in the last three months, Bubble Boy and Loria, whose presence on the pitch is about as desirable as bird flu. Think it's too early to start drinking? Only 17 hours til gametime.

When: 1500 CET, 0900 EST.
Where: Stadio Oreste Granillo, Reggio Calabria.
Forecast: 14°C, 90% chance of rain - and the Granillo is not a pitch which deals well with wetness in any, way, shape or form. This one could get quite ugly quite quickly.

Streaming: In case you missed it midweek....

The important stuff: devastation in the streaming world.

Because of pending legal proceedings, Myp2p has removed all links in the following competions: Elitserien - SM-Liga - NHL - Swedish Allsvenskan - Italian Serie A - English Premier League - Dutch Eredivisie. Once a judgment has been given, we will notify you of the outcome.

So we are rerouted. Bet365 works if you live in Europe - and anywhere but the US, I believe (it does, however, require a free account). Roja Directa has some backup options. But the best option will presumably be the one most of us use every week: Atdhe.net.