Homa Away From Roma v No Totti, No Party

Share All sharing options for: Homa Away From Roma v No Totti, No Party 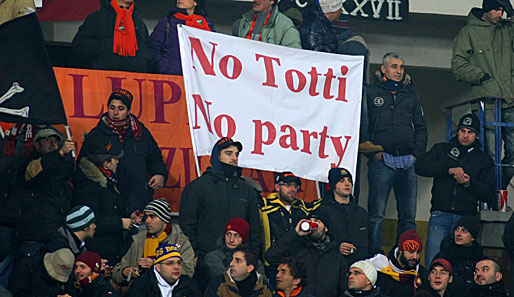 Forget Leonardo, forget Claudio Ranieri and forget guesstimating Ronaldinho's levels of hungoverness during tomorrow's match (+/- Robert Downey Jr). There are only two underlying forces which are worth discussing for tomorrow's match: home away from Rome and no Totti, no party.

Homa away from Roma.

In the league, Roma have not lost at the San Siro since the final game of the Calciopoli-stained '05/06, a 2-1 loss to Milan on two penalties. Since then it's been 4-2-0 in the Serie A, with three wins against the devilish side of the Meazza at the Meazza. In total it's been 4-2-0 against Milan the last three years.

No Totti, no party.

Francesco Totti is stupidly good. 'Bout sums it up.

Is losing Kaka a wash? Possibly. What's not a wash is having John Arne Riise, who's two for two at the San Siro in the league. If Inter or Milan snapped him up, he'd win Capocannoniere easy.

In reality, these two might balance each other out to a degree, putting Roma and Milan the football team back on level playing terms. Of course are the teams themselves on level levels? Maybe, maybe not. There's so much going on in this game it's impossible to tell.

On the balance of things, it's starting to look as though things are stacked against Roma. Which means there's no balance at all, really. But then there is that one thing...for the first time in what seems a year, Roma is not the team in crisis.

Another two weeks of learning, adaptation and progress with nearly the entire squad. Despite not having Francesco or much of an attack, this should be Ranieri's best Roma yet.

(Is Borriello really getting quasi-healthy snubs? Can't they throw him Roma's way for a signed Mexes litho?)

JSB is out and Bogdan Lobont's reflexes currently aspire to rheumatoid arthritis, so Doni will get his 09/10 debut. Don't expect the mental side of his game to go smoothly. Not that it has in the past.

If Mirko can't go - he should be available - things may have to get creative because Menez will likely be better against late legs and Julio doesn't have many minutes in his tree trunks yet.

Personally I'd prefer the 4-3-1-2 with a bit of Brighi, but RN has Rodrigo as getting the start. Outside of those three, it should be the standard.

Last trip for the memories: