Finger Off The Trigger.

Share All sharing options for: Finger Off The Trigger. 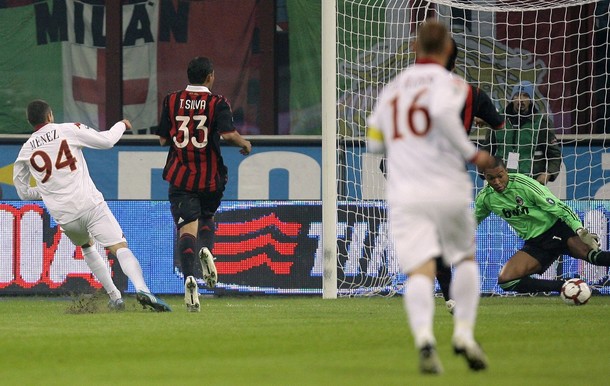 There may have been a bit of controversy about last night's loss. Maybe.

More than yesterday, more than Roma, more than anything: Roberto Rosetti is an abysmal referee - has been for some time. Serie A is less of a league with him in the fold.

Of course it's not to say Milan posed no problem in the loss of result - it's precisely that the Rossoneri posed none at all which was the problem. The red and yellow foot came of the pedal, yet again. It was always too easy, they'd hit them too hard off the start. Three to nil at the end of the first quarter hour wouldn't have been unjust (or four, as it were), but their compassionate souls wouldn't allow such a clinical absence of emotion. The hitman with the shaky trigger finger.

Rosetti then ushered Milan back in the game and the rest is history. Never had the killer instinct under Spalletti; never going to have it in six weeks under Ranieri. I think we've likened the perfect assassin to a great white shark and Roma to the playful dolphin, always wanting to fuck around for the sake of fun, not the result. In time they will evolve beyond their playful bottlenosed selves, but not just yet it would seem.

Milan got the dolphin, Roma got Rosetti and that's that. Sometimes, it's just that simple, just that unfortunate.