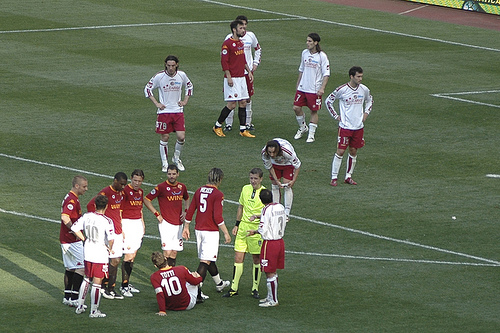 Oh Livorno, how we have not missed thee.

Back in the day, the last time Livorno was found clawing for its topflight life in October, ultimately failing, they were bastards. Absolute bastards. How dare they not roll over for Roma. How dare they unleash the most incredible team bus known to man and buses. How dare they injure Sir Francesco. How dare Marco Amelia act a...gasp...true professional.

How quintessentially Roma was the scene at the end of the last Roma - Livorno fixture? Marco Amelia, the Roman son shunned by management only to turn into a quality player, apologizing to the Roma fans - his fans, his brethren - for having done his job, in the process leaving Roma's scudetto hopes in tatters. A Romanista landing the Roman deathblow. How goddamn 'Roma'.

This is quite the downer just flipping back in the scrapbook, really. Moving on...

I lied. I cannot move on. That was arguably the most crushing blow in recent Roman history; I dare say the worst loss under the Spalletti regime - and it was a draw, for fuck's sake. Old Trafford? Please. They left with their pride in tatters but limbs and souls intact. This life questioning, suicide inducing, soul shattering draw took away two precious, priceless points and, more importantly, it took away our Francesco Totti. It took the Roman lifeblood, the heartbeat of our fair Roma, and rendered it a spectator. Taken to task by, of all people, a player who in that previous season with the capital's red and had been that same useless spectator, only without injury, and a Roman son, making one heroic save after another.

To this day, it haunts Roma. Livorno haunts Roma, and they shall never be forgiven.

For Francesco Totti; for Luciano Spalletti; for Ludovic Giuly; for Alberto Aquilani; for Christian Panucci; for Alessandro Faiolhe Amantino Mancini:

Off with their heads.