Roma Has A Curse, And Its Name Is Livorno.

Share All sharing options for: Roma Has A Curse, And Its Name Is Livorno. 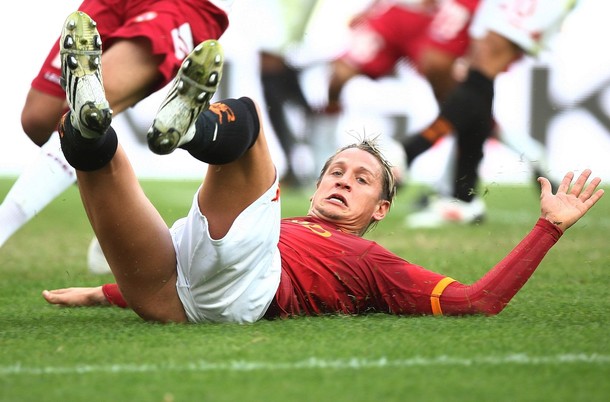 How wrong can it possibly go? How predictably, consistently wrong?

Roughly 18 months previous, Roma dropped big points at home to a very weak relegation-bound Livorno side. The next day, Francesco Totti was forced to the operating room.

This Sunday, Roma lost arguably their worst game in years, at least on paper, to that same Livorno. The next day, despite not playing, Francesco Totti was forced to the operating room.

Are the gods conspiring? Is Livorno the bogey team both for results and Francesco Totti's knees? Is Francesco Tavano the Antichrist? Should we laugh? Should we cry? Should we pray for another day?

All of the above.

A small problem with the meniscus this morning when he attempted to train and by the afternoon he was in surgery. The prognosis is relatively good - back to training in late November - given the circumstances, but any injury to Francesco Totti is an incredible blow. Not just for the team or the standings of Associazione Sportiva Roma, but for those who watch as well. No one will deny Francesco's days are dwindling, accelerating with each injury, and every game missed means one less chance to see him play before he's done. Five years, four years, three years or tomorrow, Francesco Totti is arguably the best thing to ever happen to AS Roma, and we want to soak in every single moment he has left. Unfortunately, you can't soak in something that isn't there.

And now, with Francesco down, the smallest man in the squad just had the weight of the world thrust onto his shoulders.

No Totti No Pizarro, no party.

Part of the brilliance of Spalletti's structure lied in that though much of the creative burden was given to one player and an assistant, the fluid movement and passing meant that one or both could be human, absent, or otherwise disinterested and the team would still create an embarrassing riches of chance after chance after chance. The law of percentages would then take care of the rest, no matter Simone Perrotta's extraordinary defiance. This system worked brilliantly when on, but was not without inherent flaw.

Claudio Ranieri's system is very similar in that it too is imperfect, yet highly effective when working. Yesterday it, inexplicably, worked. Yes, it worked. How many shots on goal were Livorno afforded? Two. They scored one - a very, very good goal at that. They had very few real dangerous chances and were guilty of one thing: efficiency. Defensively, Roma did its job. They did Ranieri's job.

What they didn't do was put the ball in the net, which is how one wins football games. No Totti, no party? Sure, but that's missing the underlying reason. No Pizarro, no party? Now you're getting somewhere. No vision, no creativity, no link, no party? There we go.

Though most outfits would have you believe Ranieri walked onto the podium and sobbed over the absence of Totti and its crippling effect on the team, his actual words included that Chilean dwarf who put me into fits of rage under the 4-2-3-1 (see: Fulham's second half counter). Why? No link, no passing, no creativity, no conductor. There we go: No conductor, no party. Either will work, neither spells disaster.

Of course that's not the real problem, is it? The problem is that they should be able to beat Livorno, the bottom team and scorer of two whole goals, at home regardless of personnel. Alberto De Rossi should be able to run out the Primavera reserves and beat Livorno at home. Anything else is failure. Simple and inexcusable failure. Failure from the players, the coaches and all that lie in between.

I want to say it started at the off with Ricardo Faty, with the formation, but one should be able to experiment against the likes of Livorno at home. Faty should be able to play trequartista, striker, left wing or second keeper against the likes of Livorno. That's not the problem. It's that execution, of which there was little to be had for much of the game, was severely lacking. Mirko should've buried those chances, even in the worst form of his life, which Roma is currently riding through during a Totti-less spell, proving once again the gods are not Roma fans. Nicolas Burdisso at the post needn't be Christian Panucci to bury that chance.

Of course, perhaps it wasn't that Faty was the problem. Perhaps it's more that Ranieri should've taken hint from the second half against Fulham and, despite the absence of Pizarro, run with it. Run with the 4-2-3-1, run with Stefano Guberti (who became Roma's, loosely termed, MOTM within 7 minutes of arriving on the pitch), run with some semblance of a self-reliant attack. Just run, really. For me that, not the inclusion of Faty or Mirko or Pit, is the grave mistake Ranieri made. Momentum is a football club's best friend; to shun it is a crime worthy of the gallows.

The substitutions were, nearly entirely, curious. Not exactly a time for an Adrian Pit cameo, was it? Never a time for an Adrian Pit cameo, is there? Maybe Menez should've been given another chance, but Guberti was the right call and he desperately needed someone to run off Guberti, or run with Guberti. Jeremy Menez off the ball leaves everything to be desired - in fact he's absolutely useless without the ball, but certainly makes up when on - so you can certainly see why that substitution was made. Didn't exactly work, though, did it? The right call was probably Taddei - in order to create chances without the requisite parts of quality, some concessions must be made. A bit of space down the right was just that concession.

And though Ranieri has done an incredible deal of good tightening up that canyon of a back which Spalletti left, he hasn't quite figured out the squad yet, has he? For the third time in four games an ineffective midfielder has come off at the break - not exactly a shining beacon of confidence. Perhaps it's a squad personnel thing, but he should be better right now. No one's asked for miracles and though he's arguably fixed much of what was wrong, he should've been better against Livorno.