Share All sharing options for: The Roberto Donadoni Experience Comes To Town 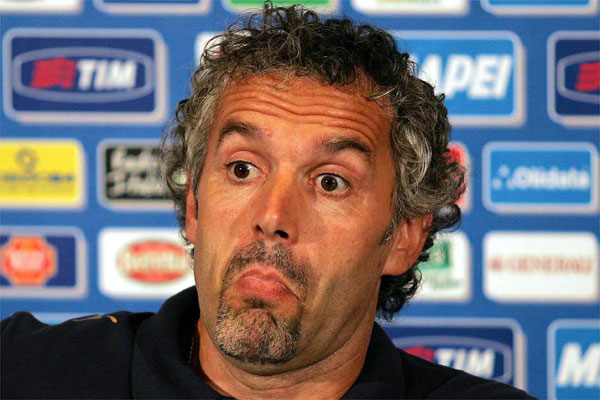 I think we go through this every year: is this a derby? Not really. There's no venomous feel, no raging build-up, no overwhelming sense of one game outside the purview of the season. But this year is even more. In fact this is something of an anti-derby: a game with the focus entirely on the outlying fixtures. For Roma it's about one more step in the grand journey that is Claudio Ranieri's vision; for Napoli it's a question of next week's gaffer. If anything at all, this game has little self-containing value.

Of course don't tell that to the police outfits of Rome and Napoli.

Now is this game more about Napoli than Roma? Almost assuredly the former. Donadoni's job isn't just on the line, it's on the floor, tattered, drunk and wondering why its father doesn't love it. It might even take a heroic demolition for him to arrive at a stadium next weekend employed and with an ounce of coaching credibility to his name.

And this, in turn, means all is not tranquil within the Napoli squad. Mostly because it's widely assumed they suck, but also because they are almost definitely looking at a regime change within weeks, if not days. This year they've been the equivalent of a small town valedictorian: at home against the weaker opposition it's all well and good, but away from home against the big boys, it's a rout ending with soiled underoos and a slight drug problem.

Maybe they should be better on paper. Or maybe calcio isn't played on paper and they're leveling off right where they should: comfortably above the likes of Siena and Livorno while comfortably below your Inter's and Genoa's. I could stand by either assessment. But for today, I think I'll stand beside the latter and say...

It's Roma's day should they so choose to show up.

* - Santacroce & Campagnaro are out in the back, which significantly weakens a three man back.

Here's the problem: all the 'likelies' have been called up, but a number are at less than full fitness yet not quite 'injured'. In fact four you'd automatically engrave in stone judging by the callup list: Mexes, Totti, Taddei & Cassetti. Rodrigo's injury was a bit heavier than the others, but even his wasn't all that bad. They're all really just harsh knocks at worst.

Thus a few of these can only be determined on the training pitch and in Ranieri's office when he asks point blank "How much can you give me?". It makes things tough to predict, particularly against a side who can, despite their struggles, absolutely punish fatigue on the attack.

This is what I'd guess, but I'm taking Napoli at team sheet value. They won't challenge for the scudetto, but they're good enough to do some serious damage on their day. You prepare as if it is their day and then pray it isn't.

And now that I've looked at RomaNews, the only change is they've predicted is Motta over Cassetti - without even listing Marco C. as a possibility. (You can be damn sure it'd be Burdisso, Juan, Mexes, Riise were Tubbs available.)

Totti will play. Mexes will play. I'd rather not see Cerci start, but I concede it as a possibility.

It also helps that the other side is being coached by one Roberto Donadoni. Don't think I wasn't thrilled he was kept employed for this one at the least.