The High Price of Victory

Share All sharing options for: The High Price of Victory 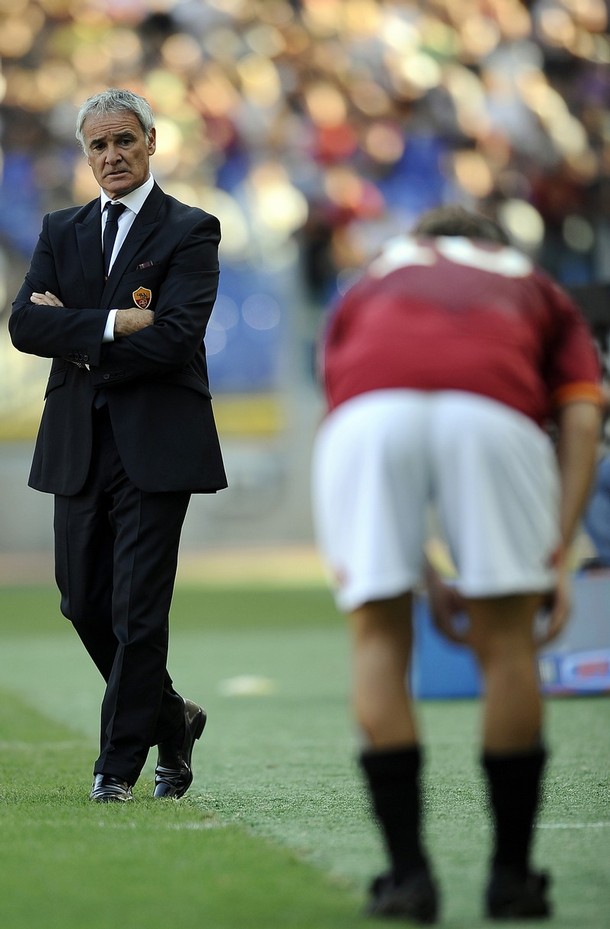 Maybe it was never Spalletti's fault. Maybe it never had anything to do with training, Trigoria, or that little one-eyed gnome who sits outside the grounds wishing ill upon all who enter. Maybe they're just cursed. Maybe the gods hate them. Or maybe this was the price for Donadoni maintaining his employment one last weekend.

As is ever the case with Roma present, we'll start off with the most important portion of the game review: the injury updates.

Francesco: 15-20 days, which would put Milan, Fulham and Livorno in question. Francesco says he will be in the starting XI at the San Siro. I tend to believe him - and that's no reflection on his health for the day.

Motta: Off the bat it looked like a break, a tear, or perhaps even a cancer. The info on him is so thin - right ankle trauma with negative scans - I tend to believe it was some sort of elaborate ruse masterminded by Ranieri to get Cassetti into the game without a fan riot. I stand by this.

Julio Sergio: More precautionary than anything, and thus should be fine for a battle with Doni for the first team spot.

Better than, say, season-ending injuries and/or death, particularly with the break here, but still.

As for the game, they were very good. Not quite great, not quite the finished product, but very good. And perhaps a result which doesn't get its due credit, as if Julio Sergio doesn't go down, this is another 90 minutes in clean sheet football against an offensive dynamo. This, of course, being because Bogdan Lobont's first fifteen minutes made the Titanic's rust look minimal by comparison. Julio Sergio saves that. Doni saves that. Artur saves that. For fuck's sake the carcasses of Pietro Pipolo and Carlo Zotti no-look that thing fourteen rows into the stands. Incidentally, Lobont's main quality is his absolutely insane Doni-like reflexes.

Just another day in the life of Roma.

Speaking of which...His Tottiness. Another day, another virtuoso performance. What's left to say? The bar is set so high only he can reach high enough to set it another notch.

The talk is about Totti, but there were a number of quality signs coming out of Sunday:

Lobont: It's pretty tough to hang a guy for his first shot after coming off the bench in his first game after major surgery, which is why I'm only giving him a -∞, not -∞². -∞.

Cassetti: Given the standard he'd set for himself thus far this season, this may qualify as the greatest individual game in history. Or maybe it was just fairly good and a welcome change from the recent norm. 7

Burdisso: Defender of the year by a long margin. Would be player of the year if that Totti guy wasn't sporting a 1.3g/g ratio. Another solid outing. 7

Riise: Pretty much solid across the board for the defense given how well they kept their shape and limited the Napoli threat on goal. 7

Cerci: Another game that proved he's not much beyond sub status right now. A nice addition off the bench, but he's been fairly ineffective from the beginning without that huge surge of energy making a difference. 6

DDR: Some thought he had a poor game. I have a question:

How many times did you hear Hamsik's name Sunday? 7

Pizarro: Not his finest, and there was a very Pizarro-esque pass in the first half which damn near led to a lethal counter. Fortunately, this formation provides a nicely little cushion for David's imperfect moments. 6.5

Perrotta: A healthy Perrotta cures so much of what ails.

And you know, anyone but Perrotta probably boots that centered ball from Mirko right into the arms of De Sanctis. Only Simone's world class sitter missing capabilities could've ricocheted that off of His Tottiness into the net. 7.5

Faty: A show of energy, strength, tactical understanding and a little bit of technical quality. Always gifted, but Ricardo is now emerging as a player and if he progresses like this, Roma has another very good central mid in the stable. Who knew? 7.5

Vucinic: His goal drought isn't really optimal, but then you have to remember that he did have surgery and rushed himself back a bit. But even with this, he created a number of chances - including the first goal - while proving dangerous and not putting on a Pippo clinic. All's well that ends well. 7

Now for the important assessment.

From physically, mentally and emotionally defeated to undefeated with one swift change of the gaffer. Was it pretty? Nope. Was it easy? Nope. Do we care? Nope. Why? Because it was as advertised. It was an implemented plan with inevitable yet accounted for bumps in the road which worked as expected, as desired. It was a quintessential Ranieri run of results dotted by grizzly performances and grossly unaesthetic football. And best yet? This, in the immortal words of Spalletti, is a 'project'. This is far from the final draft; this, in fact, is a team still largely going through the motions most are afforded in preseason. A lesson in learning on the fly, in absorbing and reacting, in being one with...the tinker.