Share All sharing options for: The Great Spalletti-Ranieri Shift 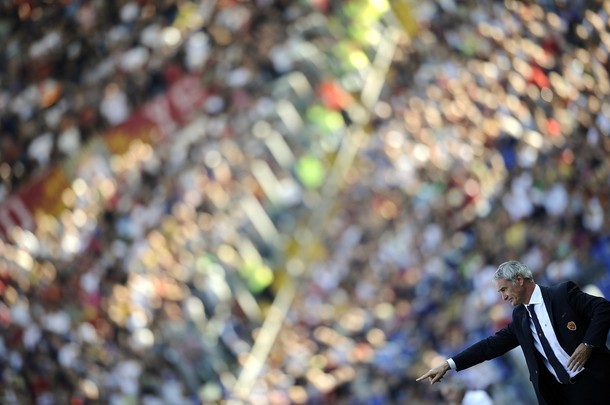 As with any profession, new management means new roles, new methods, new favorites and new brown-nosers. Nobody needs to call a conference to figure out the identities of Spalletti's most beloved, just as no one needs to look over a classmate's shoulder to determine Ranieri's developing man crushes. Now, with the canvas washed, erased and cleaned to new, we can stand back and look at the initial brush strokes to find out just whose roles have changed via the methods to Ranieri's madness.

Artur: He'd lost his gig before the swap, so it's fair to say he's currently enjoying life as a fourth keeper.

Lobont: His role has little to do with Ranieri and everything to do with the emergence of Julio Sergio. Third keeper.

Julio Sergio/Doni: I'm a firm believer that injuries, though unfair, can lose people jobs if the replacement has performed at or above par. You ride the hot hand, feelings be damned.

At the very least, Julio Sergio deserves to battle Doni for the number 1 spot. At the most, Doni should be riding the pine until JSB fucks it up. Wait and see.

Cassetti: Clearly the preferred, but also was under Spalletti after Marco Motta's abortion of a Europa League qualifying campaign. Not quite sure he's the 'favorite', but when you've got two players with pagelle totals still not cracking 20 after 7 games, you take the one with more experience and drink heavily at night.

Motta: I think I've figured it out: Marco has classic youth burnout syndrome. Think about it for a minute: he's one of the most capped Azzurrini ever at 31, he participated in last year's Olympics, he then swapped teams midseason while still being a stalwart in the youth system before his eventual senior callup, he played in the UEFA championships in June, and then went right into ritiro and a crazy early Europa League qualifying campaign on July 31st. How could anyone play that many games over the course of of one year and still be at or near the top of one's game?

I'm not saying he feels fatigued or necessarily feels like anything's wrong, but when he's getting beaten so easily with such regularity despite such talent, it's clear something is up. Perhaps his body, though now acclimated, simply needs to be recharged, as he's far better than he's been playing.

That said, rightback is a clusterfuck at the moment. How will Ranieri enjoy Cicinho's defensive 'capabilities'? No one knows. 'Til then...no one knows. And it's Cassetti as the begrudging favorite.

Burdisso: One of the 'untouchables' right now. But then Mexes was all of one month ago too...

* - Worth mentioning he may play rightback in some supremely important games. Like the one coming up.

Philou: His awful form marked by poor decision making, mostly based on neck tattoos and futuristic mullets, along with Burdisso's play has earned him the third spot on the roster, which is also known in these parts as starter until the rare occasion that Juan is fit.

Andreolli: Given the injury state of the front line he's worked himself into the mix, but it remains to be seen if he'll be the decided fourth or if Claudio will allow form to come into the equation and run Andreolli out over one of the trio in front.

Riise: Undisputed, mostly because he's been solid and Max Tonetto is already looking for a stable to stud out of. Tactically, the reigns have been pulled slightly based almost wholly on philosophy (attacking through the middle, etc) but he's still doing Riise-esque things like pissing me off with his positioning.

Max Tonetto: Only likely to see time in meaningless games/when Riise's needs a breather (which is never) or when someone needs to jog down that left hand side and whip in a cross dripping with tapioca.

iTunes: Claudio says your mother doesn't love you and neither does he.

Pizarro: When on, David has been superb and really kept this team ticking. When off, he's looked dire. But he's still an unquestioned starter and job numero uno is pulling the strings from somewhere in the midfield.

Perrotta: Back to form, back to showing everyone why coaches love him and the opposition hates him. Except for keepers. They don't mind him so much.

His position has swapped from time to time, either on the left wing, where he helped win a little something we like to call the World Cup, or sitting just behind Francesco & Friend in that familiar trequartista spot. Either works because he's @#$%ing stud.

Taddei: Now injured and wasn't poor on the right side of that 4-4-2, but you get the feeling once Brighi fully returns it's going to be a 4-3-1-2 with Matteo, Daniele and David sitting just behind Simone. Hell, Ricardo Faty might even earn a start soon. Could be a victim of injury, or perhaps a victim of being less good.

Matteo Brighi: Will likely walk back into the squad to some degree, and as a third party in the 4-3-1-2 makes a bit more sense than sticking him out right in the 4-4-2 - though don't count it out. What we can guarantee is that regardless of squad status Matteo wants a new contract goddamnit.

Faty: No one has benefited under Ranieri so much as Ricardo. Not a soul. Partly a reflection on how far down the totem poll he previously dwelled; partly a reflection of how nonshitty he's been thus far. Really, did anyone expect anything out of him this year? Anything at all? Not I. If you'd have told me in August Ricardo wouldn't see a solitary minute through May I wouldn't have questioned your awe-inspiring prescience. Now it's not yet mid-October and he's progressing as though a proper footballer or something.

Plays that right central mid spot quite well and with a few more good sub showings under his belt, he just might earn a start or two based on his own merits, not on the back of injuries. Who knew? Could be this year's Brighi, though it's a bit early to tell. Still earns Ranieri's gold star of faith.

Alessio Cerci: From off the callup squad to in the starting lineup within weeks. Obviously he did something which pleased Claudio - learned the system, picked up the work rate, fellated him, I don't know - and has now earned his shot. Has looked far better off the bench than as a starter and might head back there once bodies begin returning, bringing a bit of width and attacking life late in the game.

But clearly both Ranieri and Spalletti came around on Alessio, which says something about his future in Rome.

Leandro Greco: His name pops onto the bench every now and again, but that's a bit more about a lack of depth in central midfield than any stunning qualities he brings to the table.

Mauro Esposito: You have to wonder if he'd just accept a contract buyout one of these days to stop walking through his employment mired in a loveless marriage.

Adrian Pit (Pronounced 'Piz'): I'm anxiously awaiting the day when Claudio walks a training cone to sub in while the camera pans to a dejected Adrian in the stands. I live for this day.

Stefano Guberti: Has anyone fallen more under Ranieri than Stefano? His qualities - speed, technique, speed and speed from the wing - don't really match up with Claudio's vision of a team at all. They fit in with Spalletti's, which is precisely why he's Rome-side. A prime candidate for loan or co-ownership in the January window unless things change drastically.

Yeremy Menez: Oh Yeremy. The difference between Menez and Guberti is that Yeremy can play centrally, as a striker or trequartista, while also possessing superlative technical qualities - not just good, but great, top drawer. The problem is he's lazy - Totti runs, Mirko runs, Julio runs (somewhere, not necessarily in the right direction with cloudless intent, but somewhere), etc - and seems to have developed an attitude problem as well as niggling injuries. His constant dear diary's in the press last year probably didn't help endure him to parts of the squad or fandom, and he doesn't appear to have endeared himself to Ranieri either.

Loads and loads of talent, but it's the other stuff which is missing. Ranieri will give him a chance somewhere, but Yeremy needs to learn to work for the team or else his ass is gone in January. It might even be gone regardless.

Julio Baptista: I have no idea. Ranieri seems to prefer four true midfielders unless reasonably rare circumstances dictate otherwise, but Julio can do some serious damage from the trequartista spot under those circumstances. A wait and see once he regains form.

Yet still tossing him into the January/June potential sale pool with Yeremy, Artur, Goober and Brighi's agent.

Mirko Vucinic: The Partnership, barring injury, is going to be Mirko & Francesco. The problem is neither have shown a great ability to stay healthy for long stretches at a time, which makes that third part important.

Francesco Totti: When God offered da Vinci the chance to observe Totti, Leonardo wept tears over the Mona Lisa having learned of his failure to produce a true masterpiece.

Highly imperfect given tactical flexibility and versatility, but why not.