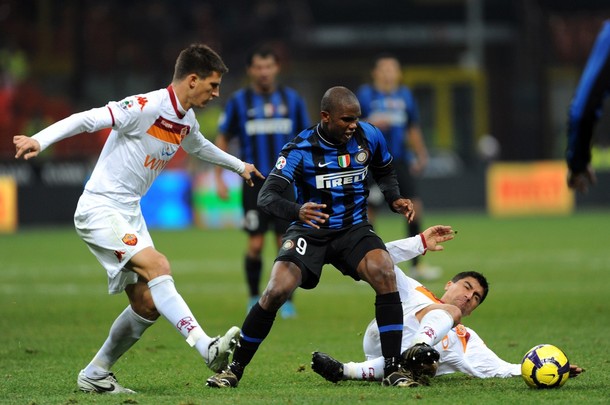 A much championed fight in the press. A crippled Roma lying wounded; a captain in the stands and another at the hospital by the half; an impromptu leader on one leg; a game with more dodgy fouls than rollerderby. And yet....

Under normal circumstances, the lofted goal counts as five in the hearts and all is forgiven. Not here. Yes, he was so far beyond Roman bodies no one could tell him Lucio was marching up his backside. Yes, he made the right move and left Julio Cesar for toast. But it's different at the San Siro. Have to bury that. Every time. You cannot leave chances on the table, because Milan teams will turn those chances into a point or three. Sunday, a point; next time it'll be three. (Unless Rosetti is involved. Then it might be the first ever five point victory.)

The Mirko we know and love buries that first one and strips down to his Scooby Doo underoos in front of the Interisti. Unfortunately he's only just making the long trek back to being Big Game Mirko.

With that said...the goal made babies in Montenegro.

And then there was Mourinho. Unfortunately - and we don't get to say this often about Mourinho's tactics - what he did worked. To perfection, in fact, and likely beyond his wildest dreams (those not involving Franky Lamps in the shower, anyhow). Let's cut his bullshit about resting weary players and call a spade a spade with an international break on the fore: he sent out football's Thug Unit to make sure it wasn't football at all. Muntari, Motta and Vieira were out there for one reason and one reason only: to break Roma down physically. That they did, and nearly beyond anything Roma could withstand. Daniele's face was broken and Philippe Mexes was forced into calcio's version of the Curt Schilling moment with that eerily reminiscent bloody sock and subsequent heroic performance*. Roma's two best players - with Philou back to being Philou and what have you - down to .5 and some dazzling hair.

* - Diego Milito would like out of Philippe's back pocket now. It's been two years and he's got enough lint to sop up the tears now.

And so they did what they had to: put on a defensive clinic and lived by the counter. Classic Ranieri, in other words. And it, much like Mourinho's vision, worked to perfection, even when the parts were less than ideal.

The defensive line was, by and large, brilliant. The plaudits have rained down on Mexes & Andreolli, deservedly of course, while Motta's rise from just-below-garbage to just-above-awesome was just as vital, but let's talk about John Arne Riise. Give me Riise versus Maicon & Balotelli and I'm taking to the basement head in knees. Did anyone expect those two to be so supremely out-dueled? Nay. He had help, sure, but this was a Norwegian stranglehold on Inter's strongest flank by some margin.

Unfortunately my guess is that Riise often plays best against better teams as he's less apt to fancy himself a goddamn prima punta (see: Mexes, Philippe) and thus his positioning resembles that of, gasp, a defender. Expect Bari not to go as well.

The subtle performance of Matteo Brighi belongs on a shelf in the manor. This was 08-09' Brighi. Somewhat flying under the radar, but so necessarily vital - so necessary it needs to be said twice - to any sort of defensive formation with central solidarity. He was arguably the best player last year once the 4-3-1-2 variation made its cameo. I suspect it will become no different here: Matteo's niche has been discovered. Whether Ranieri chooses to go this route more often remains to be seen, but it's a sign and signs are good.

Simone Perrotta brought back visions of '06, at least on the back end, the highest compliment he can be paid. Daniele was Daniele for the mere moments on the pitch. But there was one man who above all laid the defensive foundation for this game. Who flew in to challenges with the graceful panache of a circus mule. Who found every dirty ounce of desire and willed it into a furious fireball of South American wonder.

David Pizarro. Go back and watch the game. Watch every moment a vital intervention is made before Mexes, Andreolli & Co. are forced into action. Every time a play was made he was there, doing some ungodly thing looking straight out of yoga for the handicapped. And it worked. Somehow, he was there.

I have decided I hate numbers. Words are better.

Julio Sergio: You starting goalkeeper. It's been said over and over again, but it'll be at least once more: Doni is like a cat and Julio Sergio is like a person with the brain. Yeah, the cat's going to do some incredible things, but every once in a while it'll scratch your face and shit on your carpet.

Go with the brain.

Now a question: if Luciano Spalletti is such a visionary, such an incredible alchemist, why in the name of all that is holy did it take three @#$&ing years to give Julio Sergio a start?

Perhaps Luciano saw the performance against Juve and resigned out of shame.

Motta: I genuinely have no idea where this rollercoaster is going next. He might push for Zambrotta's spot on the Azzurri, or he might get roasted like poultry against the Coppa equivalent of Kosice (Lazio?). Ride it while it's hot, pray it stays that way.

Andreolli: Simone Loria could probably lap him in a feet race, which isn't so good, but he makes up for it with a fair bit of agility and a toe poke that'll earn him a few penalties and a few Azzurri callups.

It's been years and years since saying this, but here goes: Roma can start any combination of the four centerbacks possible, and I'll still sleep soundly the night before for any.

Mexes: Heroic is a word, but I like typical Mexes best.

Tonetto: Good sub, did his job, and damn do I miss vintage Max Tonetto. Perhaps the only player on this roster whose identity is still wholly sitting in the 4-2-3-1 Spalletti era. He's almost a symbol of the era, if you will. More than Totti, Mancini, Taddei, Perrotta, Panucci or anyone else, because as soon as the system died, so did Max. Two years ago he notched rougly 1,200 games, now he's scrapping for cameos as the face of Roma, as well as age, has changed so much.

I look forward to Riise's first suspension just to relive the days of a bombing Tonetto overlapping and whipping crosses.

Brighi: The bread and butter of any defensive formation. Sure, Daniele's a defensive wizard, but Brighi fills all the gaps. Filling gaps are good, or else other people fill them. And if your wife has ever cheated on you, you'll know that's bad.

Or maybe you can decipher these things without life-crushing infidelities. Whatever.

(This is what happens when you set the bar low.)

Faty: I suspect it was Moratti who replaced his studs with rollerblade wheels.

Mirko's was the far more glaring opportunity, but if Bambi here could've stayed on his feet he might've iced it as well. Everyone's calling Ranieri's tactical decisions spot on, but I'm calling bullshit. He clearly should've left Tonetto on the bench and subbed in some proper shoes for Ricardo.

Menez: When Ranieri first showed up in Rome, it was thought Menez's days were numbered. Claudio the defensive disciple and Luciano the attacking visionary, Spalletti's strengths seemed to mesh much better with Droopy. Then there were the fights, the non-calls, the snubs and the benchings. Everything pointed to Menez as the first January casualty.

And now this. Not only is the talent shining through, but all the other stuff is vanishing. The diving? Nigh gone. The boy actively tries to stay on his feet now. The laziness? He actually ran off the ball this weekend. Who knew? And the vision? My, my, my.

The boy's a bit special. And, incredibly, it's been Ranieri bringing it out. Who knew?

Okakachukamuthafucka: Speaking of boys who are a bit special...if Mirko's goal made babies, Stefano would've made Italian families of Nigerian descent had he scored on that run from midfield. The skill and pace for a manchild his size is staggering. This one could be the answer to all that ails.