The Yearly Trek To Purgatory

Share All sharing options for: The Yearly Trek To Purgatory 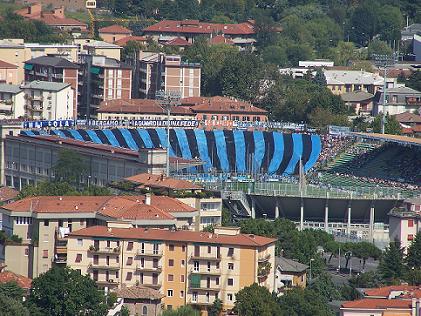 Loathe Atlanata away. Absolutely despise it. Because every single year, Atlanata is typically pretty good. Right on the European bubble or thereabouts, which is nothing to scoff at in the Serie A. So obviously Atalanta away is a tricky fixture. But Roma always has been and is better, and therefore they should win. Yet they don't. Two of the last three years, since Atalanta's latest return from the calcio dungeons, have been losses - last year's of the particularly humiliating three-goal variety.

Despite these shortcomings, it's always a bit of nothingness regardless of outcome - an inevitable postgame indifference. Losing to Juve, Milan or Inter away? Not the end of the world in this realm we know now as 'logic' - after all, it's an 'advantage' for a reason. The likes of Genoa, Fiorentina and those teams which should be in the UEFA Cup or Europa League burn a bit because Roma is, even on their travels, supposed to declare their superiority with grunts and chest thumps and all sorts of masculine bravado. But Atalanta? If they win it's because Roma is clearly the better team. If they lose...decent team at home without the depth in quality to be a true contender yet capable of special moments and thus quality victories. They're a good team, and so they should beat the occasional bigger fella at home. So it's just sort of...eh.

Fortunately this year it's a bit more than 'eh'. Unfortunately, it's creeping worryingly close to 'must/should win' territory. Atalanta, aside from that nice little stadio in the corner, occupy the 17th spot in the table. In November, this often means your team is not very good. It may even mean they suck something horrible. Or that you're on par with Lazio.

Without a doubt not the latter, nor are they horrible, but Atalanta are certainly not very good. And then neither are Roma on the road. In fact the two are quite comparable: our fair giallorossi have 6p in 7g away from the comforts of home, while Atalanta have 5 in 6. Roma's, having gone to the San Siro twice and Genoa, is a bit more excusable. It's also more excusable because that's simply how it is with your most favorite team. (Along with that 'home field advantage' rubbish.)

And this to say nothing of Roma's inexplicable ability to disappoint when expectations are high. After two solid games (well, one and a half), they should be flying high, and that is precisely the worst time to utter that sadistic four-letter word known as 'hope'.

I've suspected throughout the week that, for no apparent reason other than the whims of the voices inside my head, this game will be severely lacking in streams, and that hitting the power switch to spend two hours on an exercise in Chinese streamed futility will not be worth it. I'm also starting to suspect the same can be said for the match itself.

Because who wants to go to purgatory?