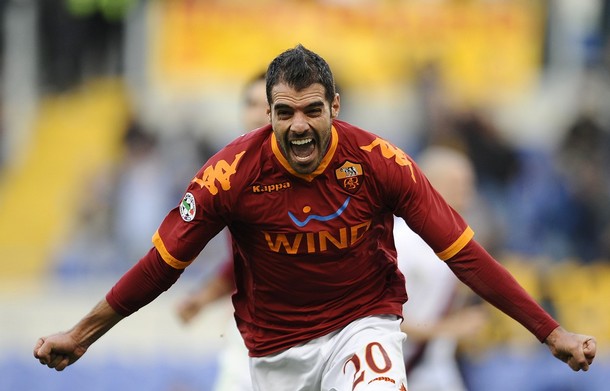 Struggled forever finding any words to sum up this victory. Not talking about le mot juste - just le mot. And then it came from the strangest place. The Dark Knight happens to be on Home Box Office at the moment, and I'm finding it highly appropriate as Harvey What's-His-Two Face would so quintessentially sums up la magica in name alone. These days, those days, every days. Bipolar as ever, two sides of the same coin as ever, two-faced as ever.

My head, mostly by the manner which they went about achieving this valuable triangle, was throbbing throughout the entire thing and thus I misremember much of the game, but this is what I unmisremember - both sides.

Good: Mirko Vucinic & Simone Perrotta got their first goals of the Serie A season.

Good: Mirko Vucinic did not mess his pants on a sitter.

Bad: In the last 97 minutes of football against Bologna, Mirko has three goals. So maybe he just likes playing Bologna.

Bad: This probably fills his quota til March.

Bad: It was very, very ugly.

Bad: A rightback returning from diabolical form finally put together some decent form. And then got injured for roughly the 29th time in the last three games. (Fuzzy maths, but ballpark or thereabouts.)

Bad: The same goes for his hair.

Good: Matteo Brighi's current form could send last year's form a postcard and it wouldn't arrive until next year.

Good: Fitness, we suspect, puts him off the hook. (Though you could put him back on the hook if you just picked him up and placed him on a coat rack.)

Bad: So has anyone else seen an athlete in great form while haggling for a contract, only to swandive immediately after receiving said contract? Me neither...

Good: Jeremy Menez is smoother than Casanova on silk sheets.

Bad: It's by necessity, as Juan was officially created by odd blowing techniques from a long tube.

Bad: I don't even have a snippy snap here - that was actually pretty goddamn sweet. I must be out of rememberings.

And remember this guy?