Elephantiasis of the Left Thigh.

Share All sharing options for: Elephantiasis of the Left Thigh. 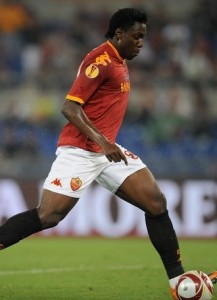 The English will have you believe this was about the referee. But with the benefit of video replay we have seen...

i. The intentional handball in the first half on the ball to goal was a red card and penalty.
ii. The red card in the second half was not.

So they cancel each other out and a penalty is left on the table. Pretty decent swap if you ask me.

Baptista skirts one wide. Fulham with one last throw, nothing done.

That, admittedly, was a pretty poor call. But Roma were just playing the keepaway game and it has little effect on this game.

Straight red for Konchesky for a tackle on Taddei, who sells it like Rodrigo Taddei.

Menez with a streaking Taddei makes the poor choice and shoots. Still a bit of maturing to do.

87' Zamora goes to ground quite easily in the box, wants a call, none given.

Okaka goes for an audacious bike from outside the box and Schwarzer forced into a leaping save.

86' Fulham now pushing numbers as they have little choice here.

Okaka so nearly beat's the line, but he's learned a bit much from that Mirko fella.

Now a Fulham corner. Danger is in the air....Julio punches like a proper keeper should.

83' Menez gettin' fancy, Julio plays it back to yeremy down the line who is stonewalled.

Fulham have a free kick with Mexes tugging at Zamora's shirt. Poor decision.

82' Okaka holding up down the line...waiting for the reinforcements and it's back to holding Fulham hostage in their own end.

80' Having missed the entirety of the last 5 minutes, the danger here is sitting back happy with a 2-1 win. Must press Fulham still. Cut their throats.

OKAKACHUKAMUTHAFUCKA. That is prima fucking punta. Header right into the back of the net.

Another corner is another goal kick for Fulham. This 5th referee thing isn't working out splendiferously, is it?

Fulham under the impression they can attack and do, eventually Riise nabs a free ball back for possession.

Daniele goes tit for tat with Riise which was a clear corner but the Europa League 5th ref botches it, giving Daniele a yellow.

70' Zamora is on and Fulham win a corner back down the other end on an offbalance clearance.

Training ground play as he's left all by his lonesome outside the box to unleash his fiery blaze of a left foot. What a peg that man was gifted.

Deflected up for a corner.

Goober off for Menez. Very well played by Stefano.

And here comes the locksmith: Menez..

63' Rodrigo fires a cross of his defender, which is an enormous help.

61' Ironically, Roma are playing the far more physical game of the two.

Julio makes some space but fires it directly at Schwarzer on his lesser foot.

59' Dempsey enjoying some falling over.

58' Love Guberti, so much fight, as Okaka has a touch of Baptistaesque disproportions.

i. Don't you forget it came mere minutes after Taddei entered the pitch, eh?
ii. Karma for the handball late in the first, methinks.

A gaggle of corners....Guberti plants one off Pantsil's face. Stefano has jolted to life.

55' Server difficulties also not helping today....Guberti tries to make my dave better but tipped up and over by Schwarzer.

52' Corner Roma...lots of possession now...Baptista with a cheeky soft volley into the side of the net.

There were three angles shown: two a red, one which showed it wasn't. I suspect the ref saw one of the two.

49' Professional foul by Gera to snuff the attack. And not Nevland with a quick red for taking out DDR from behind.

48' Lots of running around chicken/head style.

And I don't care if Doni is actually part cat, sell him. Now. His stupidity cripples this team time and time again, as with a wasted sub here.

Cicinho, after creating the best chances of the half through his crossing, coming off. Don't get this one bit. But then that's the want of Ranieri.

Certainly not as poor as they've been recently, creating enough chances to get something done surely, but not putting them in the back of the net. And, to be fair, this could so easily be 1-1 on two penalties right now.

Knowing Ranieri he'll make a halftime sub, but I'm not seeing one necessary at the moment. Seem to be putting a few things together. (Outside of, perhaps, Motta for Cassetti.)

Had the good fortune to review that handball in slow motion - he actually stuck his hand out to stop the ball from going to the net. The gripe is less with the referee and more about the lack of video replay in football.

44' Doni hurt himself unnecessarily juggling the ball with an attacker steaming down. Unfuckingbelieveable.

And a Dempsey shot skirts just wide after Andreolli failed to clear. Bit worried about his confidence here.

Short ball played, Mexes' shot hits the outstretched hand on the way to goal but no call. Everyone wants the penalty but it was bulleted too quickly.

Okaka does brilliantly to dribble with two defenders and his shot is deflected for a corner...

41' Andreolli in a tough position made a nice little tackle to clear an easy chance for an offside Dempsey.

40' You know, I'm starting to think that Ranieri is truly bizarro Spalletti: instead of a second half letdown, they don't quite fully show up for the first half.

Gorgeous touch and pass by Julio to create a chance down the Fulham end and David drives a shot which Okaka can't escape from in an offside position soon enough.

37' Kamara heads a completely open header - tough angle admittedly - nowhere near net as Okak risks a red card going studs up high, but only a yellow.

36' JRiise with a vital interception cutting off supply to the goal. Very vital.

35' Cicinho's cross turns into a harmless shot, but it's clear he's miles above anyone else on the team at whipping balls in right now. Missing Tonetto a bit, actually.

34' Yellow card for Greening for improper use of hair.

33' Riise is having a field day against Cassetti; little surprise.

And Clint Dempsey blows a 1v1 with Doni by allowing the defense back into the equation.

Cassetti whips a ball into Baptista when he should've left it short for Okakchukamuthafucka.

28' More than the scoreline, a bit worried what this does for Andreolli's confidence. He may be necessary on the weekend and conceding such a clear penalty cannot help.

26' Guberti has become the main avenue of the attack, which isn't all that effective with so many bigger Fulham bodies in the box ready to clear crosses.

23' Cicinho is wearing some odd apparatus on his right leg, presumably to prevent injury and/or being good at defense.

Clear penalty conceded by Andreolli. Hero to goat in a moment.

16' Incredibly, Hangeland wins the physical battle between himself and Pizarro. It would appear David could not slay Goliath this go 'round.

14' Baptista and Goober have a moment of misunderstanding - obviously not having spent much time together, what with Stefano avoiding the trainer's table and all.

13' Guberti, immediately after the British commentary mention his onefootedness, skirts one with the other foot towards Okakachukamuthafucka and it's cleared to win a corner. So ha.

12' Fulham looking at an early sub. Ranieri should also be forced into at least two first half injury subs.

11' Julio with something resembling a proper footballer's touch, so that's something.

9' TVU is popping in and out, but was fortunate enough to see Daniele block a shot and Cassetti's side part.

5' Cicinho is in midfield as Baptista finally meets his match in the giant Norwegian Hangeland.

Okaka with an early offside ever so slightly.

Busy looking for a stream whilst they kickoff...

Stefano ate a small Filipino family and is storing them in his thighs.

Love this lineup, particularly the men up top. And I wouldn't be surprised if Cassetti and Cicinho swap places.

"I have always said I want to stay at Roma. It's a discourse which relates to my life and the day I became a Romanista, not based on trophies, or who the club buys."