Homa Away From Roma Pt. II

Share All sharing options for: Homa Away From Roma Pt. II 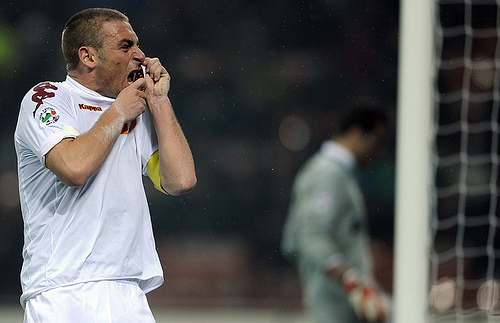 Best news you'll hear up until the game: they aren't supposed to win.

Which really makes it fun, eh? Inter are in good form; Roma are not. Inter have a fully fit squad; Roma do not. Inter are at home; Roma are only sorta at home. Classic nothing to lose game.

Good personnel news: RomaNews is trumpeting the midfield of Brighi, Pizarro, Perrotta and DDR in rhombus form. At its heights, the finest midfield Roma can offer.

More good news: for the very first time ever, I checked the referee before checking the squad list...just to see if it'll be Roberto Rossetti. It won't. Another piece lessening the tilt a bit.

The almost bad news, not quite good news: no Doni no party. Are we at the point where Julio Sergio is a wash with Alex, if not preferred? Can't speak for the fandom, but I'm damn close. Doni may be part feline, but Julio has a full set of chromosomes. Push.

(Gun to the head, however, and I'm tapping Doni on the shoulder.)

The bad news: no Totti, but you knew that already, lessening the sting.

The real bad news: they're not in good form. At all. Bologna wasn't convincing; Fulham, though they did precisely what they should've against ten men, was still against ten men. And they're still just two weeks off a loss to Livorno at home. Hopefully this is enough of a bullseye to pull everything together, but a great deal of things must be put in the right places in order to be tightly bound.

The really bad news: no Juan, no Burdisso. Not entirely sure whether Burdisso would've played if fit - the gentleman's agreement with playing against the contractual club and whatnot - but it's still a loss, as you can be damn sure that backline would've read Burdisso, Mexes, Juan, Riise if all were fit. (At some point it will read a sexy Andreolli-Mexes-Juan-Burdisso this year, I guarantee it.)

Some less than ideals coming at the wrong time against the wrong team in what may or may not be the right place anymore. So all they must do is play like they have nothing to lose. Because they don't.

RomaNews likes Ranieri to outfit that rightflank with Motta; I nominate Cassetti until Ranieri gives us a reason to think otherwise. The rest are largely personnel by default in a 4-3-1-2 situation.