Sofia: This Game Means Something, But It Doesn't.

Share All sharing options for: Sofia: This Game Means Something, But It Doesn't. 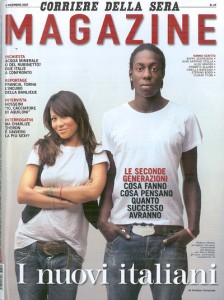 Cerci was pants when he wasn't awful. Baptista was pants. Scardina was pants simply for scoring in his 10 min debut. And winning the group is pants. It's all pants. Woo.

CSKA so nearly end the clean sheet. Now's not the opportune time to try and get back into the game.

Though the ball hopped right before it got to him. Sweet pitch.

Wonderful to get a goal, but that was all Perrotta and piss poor Bulgarian defending. If Scardina had missed that, ManU could've had him for free.

Like a freshman going after a senior from Riise; in other words: big whiff.

Perrotta just danced past a defender tip-toeing the line. That's when you know you suck.

83' Lobont with a decent save. Scardina is much bigger than expected and looks every bit the forward type.

And in his very first move he's called offside. Doesn't Alberto De Rossi know how to teach these kids to hold the line? Jesus.

Scardina on and in the process moons the camera on his debut as a big fuck you to Manchester United. Well done, son.

Scardina on for Okaka.

This pitch is garbagé, so any avoidance of injuries will be tremendously welcome. And surprising.

And Pettinari with a half-decent show of skill and first step acceleration, then pulls an Oddo and crosses it to Jupiter.

Pants tackle by Motta and Michel Platini is holding his shoulder dislocation-style.

76' Baptista in for what looked a clear third but slipped. Who gave him Faty's shoes?

(Speaking of Faty...what the hell is he up to these days I wonder.)

Totti signed. Good thing that's over, because whether or not he'd stay was soooooooo up in the air.

And it'll be for Cerci. What do I know? Quite a good game for Alessio, though it wasn't exactly a consistent 1-74.

70' Would love to see a Scardina sub if only so we could get a definitive idea of what position he plays - I've heard him described as everything from a forward, to a winger, to a trequartista, to a central midfielder. I gather he's in the Totti-type role, but that many positions leads you to believe one thing: he's just a really good athlete.

Cerci again wide, wide open and centers it into the arms of the -v keeper with Okaka waiting undisturbed. Three looks inevitable, and it looks like Cerci will be involved somehow.

Cerci roasted everyone including the keeper but was pushed wide and CSKA clear it for the corner. Desperately hoping for a third there. The gulf in quality here is alarming. Kind of like the gulf between Recoba's talent and the turds he actually puts onto football pitches.

67' Alvaro Recoba's face has hit the front page of RomaNews. This always frightens me - particularly after his desperate pleas of two years ago.

65' I swear this team gives the other team possession in the final third just to practice its ability to hold down the fort.

Andreolli with another near-penalty for another near-armball which wasn't really at all. He just attracts this stuff like flies in the Europa League.

60' Okaka whistled for pass interference, 15 yards - playing the man, not the ball.

59' Children warming on the sidelines. Who wants to bet there's a ManU scout in the stands?

Is Ranieri’s bench made by some magic or what? these people that’ve been sitting on them for the past 2 months definitely changing, from Mexes to Casseti, Rodrigo to Baps and now Cerci.

That's a mighty fine point. I suspect that, yes, Ranieri is actually a magical elf in human costume whose wand has a slightly-less-than-Midas touch.

Baptista is pulling the strings with Pizarro off the pitch. Maybe he's a regista in a prima punta's body?

Baptista is en fuego...though he should be against Bulgarian opposition. (I secretly...or maybe no-so-secretly, I have no idea...really hope they don't sell Baptista. He can be such an exceptional player.)

Baptista's passing has been brilliant today. After all the nonplaying and rough form last year, you forget how good he's supposed to be - and can be - at football.

This game has all the potential for a second half snorefest, so I'm thoroughly looking forward to the inclusion of Goober and one of the children.

48' Ranieri giving Okakachukamuthafucka clear instructions to settle the fuck down.

It's times like these I miss The Spalletti Look whenever Christian Wilhelmsson was on the pitch. Kinda. (Not really.)

46' Cerci immediately goes back to work.

Brighi on for Pizarro, which should eliminate a good portion of the CSKA attack. And Roman heartburn.

The was a lot of blah, some pfft, a dollop of meh and the occasional raspberry. Then Cerci.

That goal was pants - danced ever so slowly across the box til he'd created enough space and banged it home.

(Also not ignoring it was a long De Rossi ball which started proceedings. 1 in 100 ain't bad.)

43' Commentator refusing to admit it's 'OkaKA' not 'Oka'. Clearly he misses Aquilani.

41' Pippo might've been born in an offside position, but Okakachukamuthafucka is applying for asylum there.

39' That might've been the first time in 5 years I've seen Perrotta take the wrong angle to a ball. Wow. I'm just...wow.

Clearly the A games are back at home on the couch with Francesco.

38' I've had more exciting naps, although Motta always looks a possible candidate to shake things up. Nice to see a rightback get forward after some of the Burdisso treatment.

36' I've yet to see a game this year where Cerci doesn't look a walking red card. I know he's Roman, but come on...

Gorgeous ball by Baps onto a breaking Okaka, but Stefano buries it into the goalkeeper's womb.

32' Quite liked that ball by Julio Baptista. Would like to see him enter the frame a little more, but it's a start.

30' Cerci's face is covered with plaster of Paris. The two Romans on the pitch today look positively gladiatorial.

28' Okakachukamuthafucka starts off on one of his patented ridiculous runs that look filled entirely with luck but happen too often for it not to be skill. And then gets a yellow for 'afters'.

Cerci's face is a mess. I feel wholly responsible due to my prizefighter comment.

25' Epic collision between Cerci and a guy whose name ends in -v. Goober at the ready. And CSKA's trainer looks like a fat Ancelotti.

21' Bogdan Lobont finally flashes those feline skills. This team has three superquick keepers, doesn't it? (And one slightly below average.)

19' Watching this team - not necessarily this game - I'm a little hesitant to add a Luca Toni/Ruud type, because while Roma does often control possession, it's now more in the middle third than the final one, where guys like Toni and Ruud at their advanced ages do their damage. Then again maybe the entire idea is they need a bigger body to hold it up while the cavalry joins. Then again again, I thought Totti was pretty good at that. Who the hell knows.

17' It's roughly 12 degrees below Antarctica in Sofia today and Julio Baptista's entire face is covered with sweat. I can't tell if this is a good thing or if maybe he needs to hit a treadmill.

15' Cerci's throwing hands like a prizefighter today. Or a slapfighter. Whichever.

14' Still waiting for Daniele to pass up a 40 yard pass for one within 10 yards.

12' Cicinho is out, obviously, but watching Motta up and down that ride side leads to only one conclusion: now would be a good time to buy some luggage. With the rightback chart reading Cassetti, Burdisso/Motta, dirt, Cicinho and the lefthand side featuring the indestructible John Arne Riise, his days look over.

10' David Pizarro just threaded the most exquisite pass to the foot of a Bulgarian player. Nice to have him back.

9' Lobont with a nice save. Third keeper is the new first keeper.

6' Julio Baptista just went down like a twig in a hurricane. That's difficult to do.

3' Let's start discussing Alessio Cerci loan locations: Bari is, obviously, always a candidate for Roman wingers, but I'm liking anyone mid-table Serie B for some guaranteed starts. And a quick reminder that 'mid-table Serie B' very well might include Lazio come next year, so we can officially rule them in consideration for an 18mo loan deal.

2' This side looks an awful lot like one Spalletti would've had to start in a must win Serie A game last year. It's nice to be healthy, isn't it?

- The whistle hasn't even blown and we've got our first 'Simone Perrotta was born in England' nod from the commentary. That must be a record.

- Roma rocking the all black European kits. By far the best in the wardrobe.

- The Sofia stadium is what you would call e-m-p-t-y. Awesome. This game should resemble a slightly less competitive pre-game walkthrough.

I was going to let this one go by the wayside and sprawl on the couches whilst trying to care, but not really caring. Then three things happened:

i. Stefano Okakchukamuthafucka hit the starting lineup, and I can't pass up the opportunity for my love being stunted by his young man/big body growing pains to go unyelled.
ii. It's on television here.
iii. The goalkeepers read as...

And the floodgates shall be opened.

I may follow the game or I may not. I may just say stuff. I may tell you things you don't really care to hear. But much like this game, it doesn't really matter a great deal, does it? Winning Europa League groups is for losers.