Share All sharing options for: The Old Man Returneth 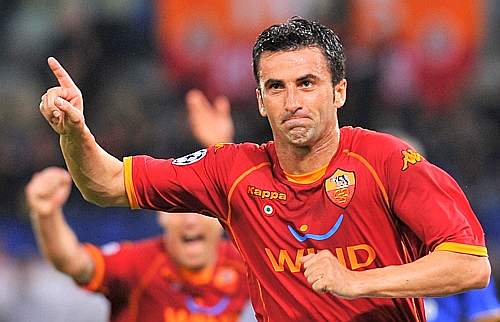 Parma before Christmas should not be - should never be - this big. Not unless we're talking 90's Parma and its residuals. Not now, no. And that's quite possibly the biggest compliment they can be paid right now - this game should not matter this much. But it does and a tip of the cap or two to Parma for pulling a Parma, ironically enough (you'll also notice Chievo are pulling a quasi-Chievo).

Normally I'd warn against throwing "must-win game" about in December, and I still won't quite do that, but this is as close as it gets. This is a should win game which, when your quality isn't matching evenly with your spot in the table, makes it all the more important. When the young upstart in need of yet another boost is three points ahead, it's davidpizarro cm away from must-win. Should win...better win...if you lose someone's losing a testicle.

Good news: Parma are doing all their damage at home.

Better news: So are Roma.

One of those Roman losses came under Spalletti and the other came during the Great Turd of 2009 (Pt. VII?). The advantage swings with good juju cradled in its arms.

And then there's Christian Panucci. The crazed man who masterminded his own exit from his self-proclaimed love will return. And it's really a shame the way it'll play out. The fans will cheer - a handful may boo - showing their gratitude; he will hug and kiss damn near every member of the starting XI, noting Doni is on the pine and Alberto is England, and then that'll be that. He will then be forgotten. It will be as unceremonious as his exit. Because he scripted it that way.

I'm so indifferent it hurts. I feel the same about his return as I did about his exit: nice to see you...in another shirt. Yet this is a guy who was so valuable to this team for so many years. He has - he had - everything that should be required to become an adopted Roman, and in some circles he was, but he will never be a Mexes, will never be an Aldair, and may never even be a Samuel, whose stint was eons shorter. Too many 'moments' towards the end, too much pride, too many times when Christian became priority number one.

Of course it's almost difficult to blame him - he won't be the first athlete whose pride will fail to register he's no longer what he once was, nor will he be the last. But only almost = he caused too many difficulties in the process. His age was the butt of every joke, but his age was also largely what drove him out of town. This, of course, has little to do with his play, which was and is still of a relatively high standard.

So maybe it's best we treat this as a death; like a wake for a fallen relative whose later years were far from his best. We'll put out the pictures with the 12 year old's hair, we'll smile fondly at the far-post headers, and we'll tell stories of yore, while pretending the final days never happened.

Here's here's to a Panucci header at the far post in a 10-1 Roman victory, and here's to Curva Sud unleashing a banner to Galloppa which says "Midfielders who would be 7th on the depth chart get sold - deal with it".