Share All sharing options for: A Very Merry Roman Christmas 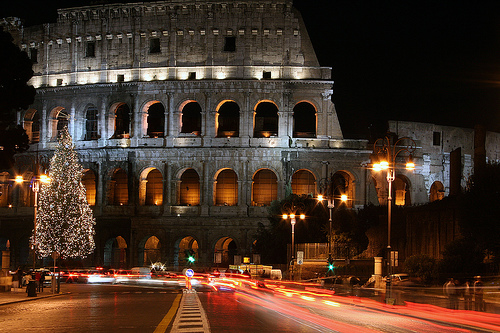 I thought short and soft about some things the lads might want for Christmas - Daniele a cheekbone, Simone a hamster wheel, Cicinho a one-way ticket, etc. - but quickly came back to my wish list for a red and yellow hued Christmas. And look at that - it's already happened.

I, like most people this time of year, took a plane ride recently and enjoyed a repeat of the weekend's game. Watching it once more, attempting to find the words to sum up the commanding win, I realized this was not one solitary game. This was something more.

There were days when the shortest of men stood tall and the trees were found slumped in their seats, the ax looming bench-side. Those days are gone, sunken into the murky depths housing lore of yore. La magica now stand tall – tall enough to rise above the rest, leaping ever higher and higher. This is the new Roma; the modern Roma; the Ranieri Roma. Gone are the days of Charlie & the Chocolate Factory and the Oompa Loompa Brigade’s crusade. This Roma stands above. They are no longer dependent on gravity, intricacy, chicanery or look-at-me.

On the weekend, this new Roma put themselves on display for the world’s lusting eyes. Two players, one new, one fresh from the shop, emerged as the face of this new Roma. It’s higher, higher, ever higher with the defensive wall. A fortress stands in Rome once again, led by Emperor Ranieri and his three generals: Nicolus, Mexus, and Juanus.

Gushing is fruitless; one doesn’t gush in the presence of art. One doesn’t stammer on endlessly absorbing a masterpiece. One stands gasping for breath, reaching for words, yet finding neither. The central duo was, in a word, perfect. The man between the pipes a maestro. The defense as a whole has been magnificent. This is something else.

We could banter on end about the first ten months of the year, debate the undebatable and resurface misery like the victim returning to the scene of the crime. We won’t. 2009 began on November the 1, and my, has it been a glorious year: result after result; improvement after improvement; progress leapfrogging progress. The lead-in a process fraught with every cliché imaginable: blood, sweat, tears – all gladiatorial, of course – and the occasional dollop of amaranto-tinged agony. Yet no pain, no…

Sunday, within the scope of one measly league fixture, we saw what has come to define Roma. And it was never the three points, the table or even the sheet remaining pure: it was the declaration of intent, of purpose and of arrival. The culmination of a philosophical shift displayed in a frame not of wood, but of ninety minutes. The new Roma has arrived.

Christmas came early this year. And should they find the need to drop something in my stocking anyway, the status quo would do splendidly.

Happy Holidays to you and yours. And some of theirs.