Basel: All About The Love.

Share All sharing options for: Basel: All About The Love. 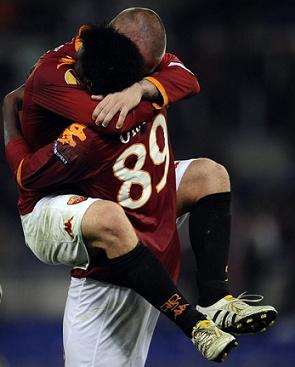 Nap time has concluded with a win and a trip to the knockouts in a performance which had all the urgency of a friendly against the Primavera's reserves.

Now one last chance for Basel headed out by Julio Baptista. Basel want a penalty when the Swiss mister actually elbowed JSB. For that, you get a lose.

Juan just absolutely bundled a Baselboy with the timing of an aloof Menez. Could they schedule a friendly for him to get some game time before Sunday?

Julio Baptista winds up for roughly 10 yards, defense reads this, deflects the ball to Saturn, corner.

90' Francesco holding up and then flagged because the ass't referee doesn't like his look.

Twas Juan, and it may have been he who hit the ball over the bar, not the woodwork. Can you tell my stream sucks? For all I know it could've been the Pope.

87' Frei hits the woodwork after roasting whichever defender let himself be roasted.

Lovely pass by David Pizarro there to put Julio Baptista in position to win a foul. Which, really, is about the best thing he's done thus far.

82' Most important part of today - Daniele will, with any sort of luck and Patrick Vieira nowhere on the pitch, play 90 minutes. Quite large in the grand scheme.

81' Baptista doesn't quite have a chemistry with this team right now - and understandably so.

78' If I could show the the screen on which my stream froze you wouldn't believe it. Baptista has surged into an insane amount of open real estate and I'm left to my own devices. According to the return stream it amounted to little, but I'm still ready to fight children.

75' Roma would be controlling this game if Jose Mourinho hadn't assumed the body of Claudio Ranieri and simply told the lads to foul early and as often as possible.

Ref & Basel coach have a friendly chat and handshake. All about the love, people.

73' So a Roman RB leaves the game uninjured. We don't treated to that often.

As if on cue, Juan is getting ready to come in. Juan for Cicinho, who gets a pat on the head from everyone in the stadium on the way out.

Basel could run out a leprechaun and it'd somehow win a header against the Roman defense today.

(Save wasn't quite as insane as my stream made it seem.)

Julio Sergio with the save of the decade on Streller. Wide open net, JSB borrowed Doni's feline flexes and got over just in time. Highlight reel stuff.

67' Streller has the ups of granite. Or maybe he was being held. Either way, great positioning turned into nothing at all.

Now would be a good time to pay attention to - admittedly his form was poor for some time - what Rodrigo Taddei does to the overall balance and structure of this team.

Mexes cutting in for the tap-in but a shirt off the ''last season's fashion" rack at the FC Barcelona store sticks a leg out just in time.

Baptista earns a corner; Roma earns possession and they'll command it from here on out.

And Vucinic is rewarded with a substitution. So is Menez. Rodrigo & Julio for the attackers. I suspect this game may shift a bit more in Roma's direction now.

What a freakin pass from that DDR feller. What a goddamn pass.

(Goal in a nutshell: quick pass to Daniele was even more quickly turned around a defender onto the running Mirko who coolly slotted it bottom left.)

56' JSB pulls a Doni, luckily the ball was 8 miles to high. Goalkick.

53' Streller gets a free header going up against wondergiant Cicinho and he skirts it roughly six pitches wide of the post. That's why you play in the Swiss Super League, buddy.

52' Menez eats turf when he would've baked the fullback into a 1v1 chance. At least I'd assume.

51' I love Daniele De Rossi, but someone needs to pull him aside and tell him it is physically possible to pass the ball less than 70 yards.

50' This game has a bit of back and forth about it now, though I'd stop short of saying it's a wide open circus show.

Basel player was so ridiculously open at the far post he decides to pass on the sitter coming his way as it's just too easy. Goal kick.

47' Come back to a Basel corner and Okakachukamuthafucka with reasonable hair. What's going on here?

46' Stream, which moved smoothly throughout the half, has crapped out again. I could fight a baby right now.

The little of it I saw uninterrupted seems to mirror the fact that there's a derby on Sunday and they need to pace themselves, not to mention this is akin to every other EL performance this year. Serie A is clearly taking priority, as is beating those Lazie fucks.

Also, apparently women's handball is big in Russia. At least that's what the ridiculous number of commercials for it on this stream tell me. It also tells me it's super violent. Who knew?

But then he doesn't really have much else to say.

Menez yellow for tackling like the attacker he is, to which he responds with the stare of death.

40' These streams today are all sorts of four-letter words.

I hope everyone appreciated the vision of Totti on that perfectly lofted cross to Mirko who was coming from outside of a normal person's eyesight. That was sublime.

35' Mirko so nearly with a Mirko Moment with a gorgeous right-footed shot just parried by the keeper. He's been quite dangerous on occasion here. The same, however, cannot be said for Menez, who I'm going to start calling Houdini for all the wrong reasons.

David Pizarro launches the Basel counter, but fortunately Marco Streller knows not how to stay onside.

33' Francesco so nearly buries #21 but the keeper is there happy to pick up the ball.

That goal seems to have picked up the Give-A-Shit factor a bit.

31' Penalty for pulling Totti down by his shirt from behind. Easy call.

He was likely to bury that ball, too. But instead he buries the penalty. TOTTIGOL.

28' The fans don't appear to be too pleased by this performance so far, but isn't this about the standard for Roma in the Europa League? Remember both Fulham first halves?

I genuinely don't think they care about the competition. At least not to the degree the fans do. Serie A is far more important.

27' I'm going back to the Sopcast stream which is minutes behind. Channel 79509.

24' You'd think one could get a decent stream, or any stream, to work for more than 12 seconds. I cannot.

21' Highlight of the Roman game thus far was Pizarro keeping possession for 7 seconds there.

Is it Sunday yet?

20' Vucinic finally gets the ball with runners alongside and he takes a ridiculously unadvised shot from 25.

By the by, Cicinho can go back to whining about his spot on the bench, because that's where he'll be shortly - if not Sao Paolo.

17' Basel goal. That, from the little I've seen, seemed inevitable. This is not what you'd call a Roma that appears to have its mind fully on this game.

15' From what I've seen, Roma have been entirely useless within the Basel third. Here's a free kick from the wing to change that....corner.

13' Mexes just got a shoulder in the nose and quickly goes down. How many masks does the medical team have in the back?

12' Mirko just poked the ball around a defender and tried to run to Slovenia and back in order to beat said defender. He's good; he's not that good.

11' As I'm not the only one, slight streaming issues this evening. Freedocast is working in splotchy fashion as the ball, yet again, wings up in the Roman box.

6' Twelve mile cross-field pass. Or: Daniele De Rossi is back.

5' Back with a crappy feed, so any suggestions are welcome. But from the early snippets, it would seem Basel have been spending a decent amount of time in the Roman end.

You knew this lineup was bound to disappoint, right?

2' Streaming difficulties, of course, but this one seems decent in English.

1' Daniele looks like he was born with that mask on his face. How Roman.

Game kicks off at 5 past.

Navip stream was showing Shaktar, now showing PSV, which is a good sign, but also putting Ibrahim Afellay on the screen, who I would pay billions for to see in Rome.

And, to be honest, not even Spalletti would run out a lineup with that much attacking intent. All we're missing is Tonetto on the left, but he's injured.

I trust Menez will be far from your textbook right wing, just as Mirko Vucinic is far from your textbook left wing. In fact didn't Ranieri say something along the lines of that this week? That positions with a number of players on this team are wholly unnecessary because of the uniqueness of their play? (i.e. You can give Mirko whatever title you so please, but he's still going to drift left and high.) Or maybe that was a Spalletti quote from some time back.

Clearly I've only brought my B+ game. Hopefully the same will be enough for Roma to dispatch Basel at home.

No Daniel Unal for Basel, which is a bit of a disappointment. Always looking to see what Roma gave up on.