There's A Luca Toni In My Stocking.

Share All sharing options for: There's A Luca Toni In My Stocking. 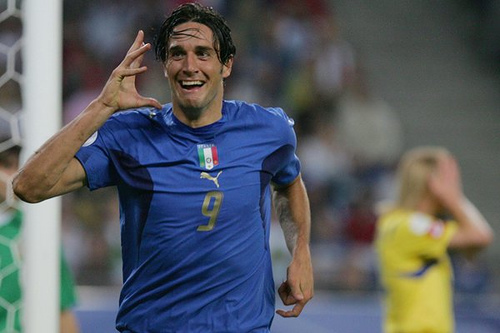 I think there might be something in the news about a Luca Toni. Perhaps. Only I can't be too sure because we can't get a word from Luca Toni, dammit. Why, oh why, hasn't he chimed in on the subject? Such a colossal move, such a drastic change, and here he is without a peep. Incredible. Truly and utterly incredible.

In truth, I've decided Luca Toni is actually Matteo Brighi's agent. He must be.

I have words on Luca Toni. Recycled words, but words. And in contrast to Luca, mine are brief and devoid of i's dotted with giallorosso hearts (not that those go unappreciated).

Has anyone plummeted in the eyes of Italians deeper than Luca Toni? Last summer, pre-Swissaustria, he was the greatest thing since the invention of breathing. One month later he was a washed up never-was. And I can’t for the life of me figure out quite just why.

Who’s turning down better than one in two? Who?

I genuinely don't know what else to say. Statistics are hardly the end-all, and I generally try to stay away, but they're paramount for poachers and those are tremendous any way you shake it. The quality is there in spades. And if you've watched both Bayern and Fiorentina over the past few years, you'll know the only thing that's really changed in and around his game is getting better service in Germany. His positioning is still top-notch and his touch and ability to hold up play are second to none. That didn't change last year, the year before or the year before that. Roma doesn't have a Ribery, but that's perfectly fine: they have someone much better.

It's too soon to say what Ranieri will do tactically, but you can be damn sure it'll include two strikers. Perhaps a 4-4-2 of sorts. And though Toni will probably breathe the biggest sigh of relief, there's someone who may actually benefit more from this than Luca: Mirko Vucinic. His genius starts in the 5-10 yards outside the box, and he's been forced and forced centrally to make up for the lack of a striker. Now watch him make Serie A's left flank his own. No longer needed to be the poacher, no longer needed to bare his underpants bear the weight of Rome on his shoulder, he can now play as he plays best: no pressure within the system.

The bulk of that pressure now rests in one place: the midfield. Because while Toni and Totti in the box would make any team in the world blush, they are not fast. One could even say they're...slow. Really fucking slow. So winning the ball back quickly in order to sustain possession will be a must from time-to-time, because there are a few statues around Rome who might have a chance in a feet race*.

As for the deal itself (six month loan): perfect. His numbers dictate he's damn close to a sure thing, but there are no guarantees and his wages would be flat silly for a club which just got out from under a goalless poacher's albatross (see: Montella, Vincenzo). They learned from that deal, and we'll call this a six month trial: do well and you get a trip to South Africa with a side of contract; do poorly and it's back to square one - which may actually mean Modena. Everything to gain and everything to lose.

But best of all: there's no doubt he wants to be here. If you want proof, Google News Luca Toni. It's an embarrassment of riches, and it's a credit to the city's allure and club's aura being able to acquire players with such a passion for playing in the shirt (see: Burdisso, Nicolas). There's something that's just a bit more about Roma. One doesn't 'like' Roma, one falls in love. Luca's in love. You can't buy that with trophies. Or a boffo Bayern paycheck.

If the defense maintains the status quo and Luca provides his one in two, it's going to be a glorious, glorious second half in Rome. Plentiful enough to fill ten Christmases.