'Twas the eve of the Derby.

Share All sharing options for: 'Twas the eve of the Derby. 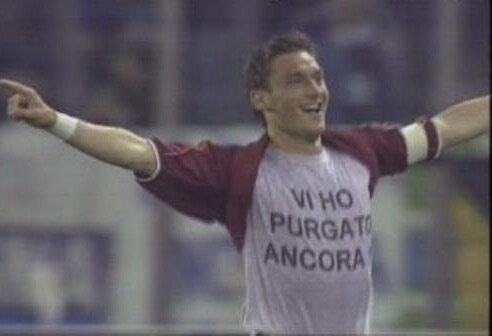 ‘Twas the eve of the derby, when all through the land
Not a Roman was sleeping, the anxiety so grand.
The prayers already said bedside with fright,
In hopes that San Francesco would soon take the night.

The giallorossi were tossing and turning in their beds,
While dreams of a run to the Sud danced in their heads.
Francesco decked in his kit and Daniele in steel,
They schemed over lit candle to honor the Roman seal.

In the morn a red sun rose over Rome,
And soon the laziali were fretting this was no longer home.
They dashed to the hills, no time for a note,
Eagerly hunting the most vulnerable goat.

The Stadio Olimpico, a twinkle in its eye,
Could hardly bide its time until the final heroic cry.
The match still long when out of the tunnel emerged a Roman hero,
His back wearing a one and a zero.

The tifosi waited unknowing outside the walls,
Inside this hero listening and absorbing their passionate calls.
Silently dancing atop the dew of the grass,
He played out in his mind every move, every pass.

The match near, the stadium opened its mouth,
While angelic chords begun belting ever louder to the south.
The hero long disappeared down into the womb,
Now assured of sending biancoceleste dreams to their tomb.

The capital’s bowl filled with flags end to end,
A cracking boom emerged from the southern-most bend.
The derby proceedings had begun, you see,
Sending God-fearing men to a beggar’s bended knee.

A sphere in the circle moved with a tweet,
And hurried hearts quickly turned to hurried feet.
On the green heels went high and shoulders low,
There was nary a doubt one would mourn a reddish blow.

The barbaric battles quickly becoming the war,
Every blue and white test sent tremors to the core.
But as the city’s hero looked on helpless,
Another between the poles wouldn’t dare not impress.

A sickening gasp was uttered when one in the center,
Soon learned from on high he would never re-enter.
Heads quickly slumped, eyes to the ground,
A second fiery flash in the sky meant a miracle was found!

The boys galloped with glee, dancing in open air,
Extracting a sly smile from the man in the stands with no hair.
The gods would not be kind, the score still round,
When from he holding the cards we twice heard a sound.

The break too short, the blood too rushed,
Another closing half left the stands hushed.
But then the sphere slipped through, the enemy left only to bask,
When from nowhere emerged a superhero donned in cape and mask!

A dash to the left, a glorious loft to the flank,
Suddenly it was the others with only a miracle to thank.
A pass to the middle, then another on the floor,
The hero had sent Curva Sud into a rapturous roar!

His work now done, he jumped with the joy of a child,
While all but the tourists went just as wild.
The whistle soon sounded, ushering an end to the game,
The capital’s sole team had once again reaffirmed its name.

San Francesco took to his fans to head the mob,
But we soon learned he’d yet to finish one last job.
With a flash he ran to the nord, and erupted in its defeated aura,
“Buona notte a tutti, vi ho purgato ancora!”